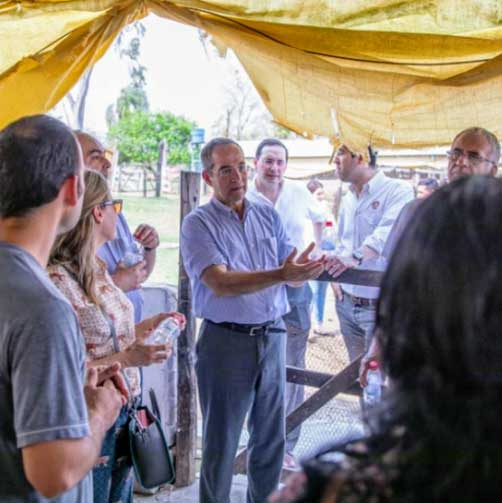 At a young age, Martin Burt challenged the view that poverty stemmed from the bad habits of the poor, marshaling the case that its deepest roots are to be found in the actions of the powerful.

He was 27 years old when he moved back to his native Paraguay after a long stint in American academia studying public administration and public policy at both undergraduate and graduate schools. Burt despised tyranny and had to lay low for a few years until the dictatorship fell in 1989 and he could begin a gargantuan, life-long journey to reshape people’s thoughts around what being poor means in a country that had no meaningful intimacy with democracy nor understanding of the notion of shared responsibilities. Despite being (too) well qualified, he couldn’t get any work, so he founded Fundación Paraguaya (FP), a now 35-year-old non-profit organization that fights poverty through entrepreneurship.

“I started creating women’s groups in microfinance and today Fundación Paraguaya is the biggest women’s organization in the country,” Burt tells Driving Change, adding that it has now more than 60,000 women organized nationwide amongst the poorest of the poor.

The first module in FP’s training program is communications. How do you talk with your neighbor? How do you listen? How do you save? “What I discovered through these decades is that to get people out of poverty, it’s not about giving them things – it’s to release the things inside. It’s almost like Aladdin’s lamp. You rub the lamp and it flows. You can only enable them to flourish,” explains.

The social entrepreneur is the author of a recently published book, “Who Owns Poverty”, as well as having a remarkable resume of public service that includes being chief of staff to the president, mayor of Asunción, and vice-minister of commerce. He is also a longtime participant in influential global gatherings such as the World Economic Forum. But the significance of these roles is less, in his own assessment, than his creation of a measurement poverty tool called Poverty Stoplight, that helps families to self-diagnose their level of poverty and develop customized plans to eliminate it.

“Poverty has been measured for decades. To finally eliminate it, families must be engaged as agents of change in their own poverty elimination strategy,” says Burt. “It’s a new approach that puts poor families in charge of defining and identifying their own unique, multidimensional poverty—who by owning the problem, own the solution”. This model has been spreading around the world, with versions of it now being implemented in more than 30 countries, including the US and the UK. “We’re working for the whole world. The idea is to humanize and to empower people to be in charge of their own lives, turning them from inhabitants into citizens,” he adds.

The Poverty Stoplight methodology is based on four insights. First, poverty is about much more than insufficient income. Second, poverty doesn’t affect families uniformly; each household has a different set of poverty-related problems to resolve. Third, the main protagonists in eliminating poverty must be the poor themselves. Institutions that seek to help poor people, however farsighted or well-funded, do not have sufficient insight into individual families or sufficient resources to permanently eliminate poverty on their behalf. Fourth, a poverty-elimination strategy must be scalable, which means that it must cost very little to implement and, ultimately, must sustain itself financially.

The measurement tool creates geo-referenced maps of communities with layers of information as to why households are poor, which can help policymakers and NGOs better target their services and, just as important, ensure that public services are more responsive to community needs. “When they know why people are poor, policymakers can target interventions to the cause of a problem, not just the symptoms of it”, Burt explains. For example, if a lack of motivation to work is the issue, then interventions should focus on this area. If it is access to credit, then financing may be the solution. If people lack knowledge, perhaps training is the answer. “By helping policymakers pick the right tool for the cause, not the problem, the Stoplight has the potential to help improve the welfare of poor communities while strengthening governments’ accountability to citizens,” he says.

In the past two years, FP has been working to adapt the methodology to local contexts in collaboration with partners including UNICEF China, Heifer International, the Clothing Bank (South Africa), the Standard Microfinance Bank and the American University of Nigeria, the Women’s Global Empowerment Fund (Uganda) and Junior Achievement (Latin America), among others. “The tool is also a challenge to the current monetary policy and the World Bank definition that poverty is simply lack of money. Who established that $3 per person per day is the correct metric? Isn’t self-esteem important? Why don’t they use that as a parameter?” he complains.

At the end of 2019, Burt presented a draft bill, based on the Poverty Stoplight methodology, establishing guidelines for poverty elimination in Paraguay, at a public hearing organized by the National Congress. It is currently being studied by the Chamber of Senators, but he doesn’t expect it to be adopted. Regardless, he will keep trying. “What we’re proposing here is a law to eliminate poverty. The goal is to abolish poverty like slavery was abolished. Government programs do not believe that poverty can be eliminated. They prioritize the promotion of economic growth and they have poverty alleviation programs like conditional cash transfers – which will never be enough,” he says.

Burt is convinced that it is possible to eliminate poverty. “If you take a complex issue like poverty and you disaggregate it into small, achievable and actionable indicators, you can make progress. What we have learned is that perspective is rationality,” he says. Often the wrong things are being measured. For example, he points to how in the United States there is widespread measurement of food deserts, areas with limited access to affordable and nutritious food, in contrast with an area with higher access to supermarkets or vegetable shops with fresh foods. Yet, Burt points out, a better “indicator would be ‘does my family eats nutritious food?’ The same thing is true of financial inclusion: the indicator should not be ‘is there is a bank in my neighborhood?’ but ‘do people save?” he argues.

Burt has become used to the civil service, private companies and even religious congregations showing acute interest in his work yet, at the same time, questioning its effectiveness. In 2003, after he finished his term as a Mayor, he was approached by a Catholic group “with an ironic ask. ‘We have been observing you and we would like to give you the keys to our agricultural high school campus.’ I thought, strange. The Catholic Church usually does not get rid of its properties. ‘Do you believe that people can overcome poverty,’ they asked? And I said, ‘Of course.’ To which they replied: ‘Because we don’t.'”

It was almost like they were asking for his help to believe that poor people can overcome their condition. “We live among the poor, we love the poor. We take in poor students, we educate them, but they come out poor, because poverty is structural”, the priest told him. Burt set everything up to prove them wrong, launching a new approach combining youth entrepreneurship with technical vocational training, which resulted in the creation of the world’s first financially self-sufficient agricultural high school. It took only five years and there were no government subsidies. This model has since been replicated in over 50 schools around the world, with similar success.

Burt points out that the program is ultimately designed to avoid the old trap of government services treating poor people as damaged goods. “They think the poor can’t learn and when a policy fails, they blame the people. They rarely admit it was a problem of design. Technology, including tools such as the Stoplight, can help the government learn how to listen”, he insists.

Intriguingly, this pioneer in using microfinance, micro-franchising, youth entrepreneurship, financial literacy education and technical vocational methodologies to address chronic poverty around the world says he has learned that, to some degree, we are all poor. “It’s not only low-income people that are poor. It really depends on the indicators, which can equalize us in interesting ways,” says Burt, adding that “the most important thing to remember is: If you do not sit at the table, you probably are on the menu. Each person needs to recognise his or her own poverty.”

As to the future, Burt has no interest in a return to government. ”I am very much involved in public policy – but I am done with politics,” he says. “But even when I am not officially serving my country I like to be of service.” A lot has changed since he began his work, and he sees plenty of progress and reasons for optimism. “I am very excited about using technology to empower families, For instance, can you imagine using artificial intelligence to understand what’s the best practices to get people water?” he says. “We need to stop thinking of Paraguay as a poor country. We need to talk about innovations like electric cars. Paraguay can be the Dubai of South America based on electricity.”