This June, the Biden administration’s new two-year fellowship program to get technologists into the U.S. federal government launches its first cohort. For Caitlin Gandhi, co-founder of the U.S. General Services Administration’s U.S. Digital Corps, it is step one in a mission to change how the government approaches hiring, tackling two issues: insufficient early career tech talent in government and a lack of diversity in the tech workforce overall. 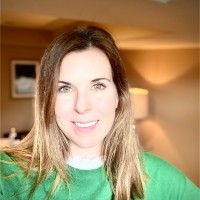 “There’s an immediate and critical gap at the early career talent level for technology talent, and agencies have had limited success being able to fill it. We have so many vacancies at that level,” she explains. The problem will grow in the years ahead due to the aging workforce. “We’re anticipating a large retirement swell because there are a lot of technologists in the federal government who will become eligible in the next few years. Without a succession plan the challenge we’re facing will only get harder as we lose that accumulated knowledge.”

The program has picked its first 30 fellows across the “five big disciplines” of software engineering, cybersecurity, product management, design, and data science and analytics and its project portfolio will focus on economic recovery, equity, health care, and immigration, as well as customer experience. Fellows work on innovative programs to help the government better serve its citizens through technology. The team sees the first year as a chance to learn and iterate and plans to double the number it admits next year, eventually growing to over 100 annually.

There’s an immediate and critical gap at the early career talent level for technology talent, and agencies have had limited success being able to fill it.

The hiring process for the first cohort — the 30 were whittled down from around 1,000 applicants — has been, in and of itself, an experiment to tackle the shortcomings of conventional recruitment, says Gandhi, who previously led talent and people analytics for Teach for America. “Frankly, there is significant opportunity to improve the experience of federal hiring.” One principle has been making the process more user-friendly and transparent, breaking down the process at each step. “We have a page dedicated to describing the application process and all other information that may be required for the best chance of succeeding and getting through the process.”

A second principle has been ensuring an inclusive, merit-based strategy, less prone to the biases that lead to unrepresentative hiring. “Our IT tech workforce doesn’t yet reflect the full spectrum of experience and diversity in the U.S.,” says Gandhi.

Frankly, there is significant opportunity to improve the experience of federal hiring.

The team focuses on skills-based assessment rather than relying on resumes — the application process includes a take-home project — and an audio rather than video interview, both of which are evaluated by subject matter experts in the candidate’s field. “We’ve had feedback from people feeling that they were truly evaluated for what they could do, rather than just their resumes,” explains Gandhi. “It’s really important to provide fair, unbiased, and equitable ways to demonstrate your ability.”

The U.S. Digital Corps team also proactively marketed the initiative to networks and interest groups of underrepresented communities, such as via the Grace Hopper Celebration, an event focused on women in tech, tackling an often-under-appreciated diversity issue: lack of awareness about opportunity.

Salary is also a consideration to more equitable hiring, for the perhaps surprising reason that lower-paid roles are more likely to attract affluent applicants who have other sources of financial security. Government cannot compete directly with the private sector in terms of tech talent, but it does not need to. The key is to provide what Gandhi calls a “minimally competitive” salary that recognizes the powerful non-pecuniary motivations of public service applicants, without inadvertently biasing against some by offering unviable salaries, especially in expensive locations like Washington D.C., where some fellows will be based.

One thing I hope for our program is to have a hand in helping people look at federal service as a first choice when they’re thinking about paths after they graduate. There’s almost a technologists ‘call to service’. 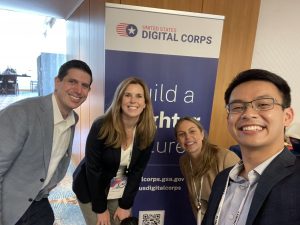 “People talk a lot about salary [as a factor in government hiring], but the people that want to do this work are mission-driven, and salary is not the primary factor,” she argues. But “if one of our areas of focus is attracting diverse and representative talent, we need to make sure that everyone can afford to take this opportunity. If you don’t have financial privilege, or you don’t have a certain set of circumstances in your background that have enabled you to take a job that is paying below what industry rates would pay you, you’re not going to be able to truly consider our opportunity.” Digital Corps fellows working in the D.C. area will earn around $80,000.

If governments can do a better job engaging tech talent, that should be from a position of confidence, Gandhi argues, rather than a feeling of inferiority when compared to the private sector or Silicon Valley. If the past two years have shown anything, “it is the role that governments can play when we do things well and make a difference.”

“One thing I hope for our program is to have a hand in helping people look at federal service as a first choice when they’re thinking about paths after they graduate. There’s almost a technologists ‘call to service’ and I can feel the drumbeat starting. I’ve experienced in my own life that when technology works for people that rely on the government, it’s incredible.”