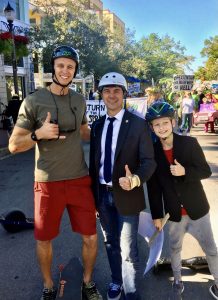 Remembering the fired-up fury — and accomplishments — of his activist days, Russell shared what he’d learned during his leap from protestor to public official, to help these protestors pass climate emergency legislation. Instead of demanding everything up front, he suggested they take a more subtle, piecemeal approach. “One by one, we got the bill passed,” he recalls, noting that a more measured tone and pacing made all the difference.

“I said, ‘I got my park cleaned up. I got elected based on environmental advocacy in a conservative area. I’ve gotten all my environmental legislative initiatives passed. Not as an aggressive protester. Or by demonizing local elected officials. Try some psychology. It’s about tricking them into helping us; letting them take credit.'”

This approachability, along with similar successes and a shared love of skateboarding have made the fortysomething Russell wildly popular with the under-30 crowd and earned him the nickname ‘The Kickflip Commissioner’, for his signature skateboard move. But he is also respected by his older Cuban base for building affordable housing and protecting the streets from storm surges. This is a tough crowd to please even in flush times.

I wanted to create a pathway for people like me, who don’t understand the hurdles of joining public life and all the goods and bads and processes.

Being multilingual helps. Russell speaks Japanese, Portuguese, French, and Spanish and is often interviewed in the latter language. To the many Hispanics in his district, such effort speaks volumes. 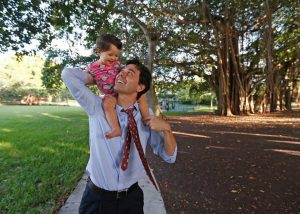 Russell’s rockstar status belies his apolitical origins. The son of a Japanese mother, his ambitions were modest: study, travel (he was a professional yo-yo player around the globe), sell surfboards, tool around on his skateboard, and somewhere in there start a family (he has a 20-year-old son and two daughters in elementary school). Never did he imagine a turn in government.

But duty called. After a short stint as PTA President, Russell felt compelled to lead the cleanup of a local park, one that had been contaminated for years. As the neighborhood’s wealth and influence grew, it didn’t seem right that coveted green space in the same tree-lined barrio as Brickell Avenue’s swank sidewalk cafes, banks, and tech startups remain so neglected.

So, Russell pushed for change and got the park cleaned up. But this was not the only Miami park in need. For 50 years, incinerators had dumped ash on a handful of other Miami parks. On the one hand, Russell was ready to hang up his activist hat and pivot back to his family and business. On the other, he felt the call to service and sensed that others might follow. 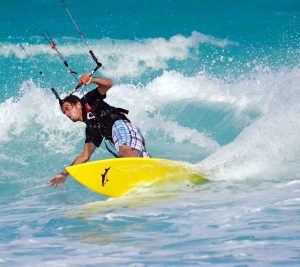 As luck would have it, the ease with which Russell had rounded up like-minded peers, spoken truth to power, and made things happen caught the eye of a political mentor. As an admirer of Russell’s non-partisan, effective approach, this mentor urged Russell to go into politics. So, in 2015, the kite surfer campaigned for a commissioner role that would allow him to continue his work in Miami.

“The year-long fight over the park’s remediation taught me the science and how to organize neighborhoods,” recalls Russell. “But I couldn’t get those neighborhoods to mobilize. So, I decided to run for office.”

The biggest piece of the puzzle is finding funding and getting the right decision-making powers to work together. That’s what gets me excited: solving puzzles for those regions.

Seven years and one term later, Russell’s popularity is off the charts. Particularly among Gens Y and Z, with whom he connects on many levels. He is revered for building shaded underpass skateparks, and for shuttering streets to traffic — a godsend during the pandemic, and something he would like to make permanent.

What’s next? A run for Congress, where Russell believes he can share hard-earned knowledge about creative ways to finance projects, inside government.

“As commissioner it was hard to get federal funding. There’s so much potential for affordable housing projects, but the funding sources are so rigid. That shoe doesn’t fit Miami. And I have never partnered with my representatives to work on how the federal government might support Miami. Capital projects need a partner at both state and federal levels. Cities can’t do it on their own.”

As a commissioner, Russell was forced to find new funding sources in order to save his district. “I did this by creating self-taxing districts, passing a general obligation bond, using city general fund dollars. Those are big, massive investments in our infrastructure requiring resources that cities just don’t have.”

Success breeds success. “Then, I realized, I am the representative I wish I had had. I thought ‘why not run for federal office?'” he remembers. “Working with 412 city mayors around Florida on common goals is the missing federal piece of their puzzle.” To do this, Russell has jumped into the race for Florida’s 27th Congressional District, campaigning on fixing affordable housing by finding and tapping novel funding sources.

As commissioner it was hard to get federal funding. There’s so much potential for affordable housing projects, but the funding sources are so rigid… Capital projects need a partner at both state and federal levels. Cities can’t do it on their own.

Russell has already hit the road to meet with mayors and to learn about their projects for which the federal government plays a legislative, regulatory, or investment role — and to offer his help in finding funding.

“I’ve raised hundreds of millions of dollars for affordable housing – or the human side of resilience. I’ve dealt with major infrastructure issues. The biggest piece of the puzzle is finding funding and getting the right decision-making powers to work together,” he says. “That’s what gets me excited: solving puzzles for those regions. I learned what I need to do at the city level. Now I want to scale those learnings for a much larger group of constituents.” 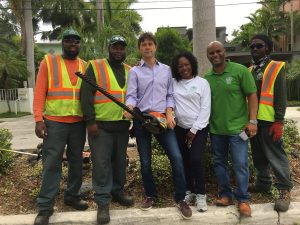 And, in parallel, Russell lobbied for The American Rescue Plan. As a result, Miami is slated to receive some $137 million in federal funds. “I’m using them for everything from stormwater to sewer conversion, land acquisition for affordable housing, and green infrastructure,” he says.

Russell also wants to see younger folk energized and in office. To do this, he is tapping into his mentoring, messaging, recruiting, and training skills – plus, of course, skateboard videos and Tik Tok. And he has struck a chord.

I got my park cleaned up. I got elected based on environmental advocacy in a conservative area. I’ve gotten all my environmental legislative initiatives passed. Not as an aggressive protester. Or by demonizing local elected officials.

“My first post, in December 2021, asked ‘Do you think Tik Tok can affect an election?’ It went insane,” he recalls. Since then, Russell’s followers have grown to more than 235,000, primarily in Florida. “It’s amazing, completely organic and authentic, because if you don’t vibe right with that crowd, you won’t get the virality. I’ve done the dances, songs, talk policy,” he says. “Now there’s an army in Florida ready to help me get elected. They’ve helped me raise over a million dollars. They’re super-invested. For them, it’s existential. It’s their future. And they want action.”

But to channel their energy and efforts, Russell needed structure. So, he started The Municipal Victory Program, which is now a branch of the Florida Democratic Party, to help anyone interested in a run for local office. There, prospective candidates can get the guidance they need to raise money, map canvassing routes, grow their base, give speeches, and calculate their win numbers. These are valued tactical and practical tips. “I wanted to create a pathway for people like me, who don’t understand the hurdles of joining public life and all the goods and bads and processes,” he says.

But first, a congressional race awaits. Gen Z is on the Kickflip Commissioner’s side. Let’s see what they can do.