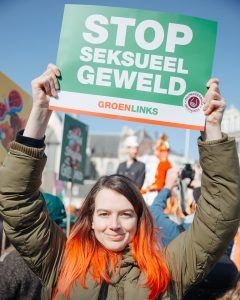 When she was 17, Kim van Sparrentak became involved in nationwide student protests in her hometown of Middleburg, the Netherlands. The response from the police was unexpectedly harsh. The students, some as young as 12, were forcibly removed and some were beaten by authorities. “This was a very formative moment for me,” explains the young Green Member of the European Parliament (MEP). “I thought, ok, when you want to fight for your rights, the police can apparently beat you up.”

This experience spurred van Sparrentak and some of her peers to speak out at City Council meetings and to go to Middleburg’s mayor to protest the treatment of the students. “I realized that as a young person, one has to go through a lot of hurdles to be heard.” Not long after, the young Dutch woman moved to Amsterdam to study and became involved with the young Greens there.

A few years later, when there was a proposal to build a nuclear power plant near her hometown, van Sparrentak did not hesitate to get involved. She dutifully attended numerous information sessions during which one could raise concerns regarding the proposed project. But found she was the only young person there, the rest were “only really, really old men – I felt so frustrated!”

Decisions were being made about something that would impact future generations and yet none of those affected were involved. The young woman organized a small festival in her hometown, with bands as a draw so she could inform her peers about the project. The power plant wasn’t built in the end, although van Sparrentak admits that this probably had more to do with the disaster in Fukushima than her efforts!

We have tons of decisions to make about how exactly we are going to digitize. Do we do it with humans in mind, do we do it with the environment in mind or not?

Nevertheless, these formative experiences helped the young MEP when she joined the European Greens and was later encouraged to run for election at European level. Describing her involvement with the young European Greens as “an epiphany”, the young politician realized that “we all had different backgrounds and spoke English with different accents but we were all fighting for the same cause.”

Previously van Sparrentak had supported many other young women who were running for office, until someone asked her why, as a young, queer woman, she didn’t run herself. The aspiring politician was only seventh on the list of Green MEP candidates but later found herself bumped up to third, due to preferential voting. She admits she did not expect to get elected and was “very surprised” when it happened. 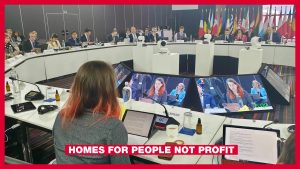 Van Sparrentak describes the European project as “a very hopeful project” but thinks it can be better. She wants to see a more social Europe, one that is more about people and doesn’t focus only on companies and the internal market. To this end, the young MEP dedicates her time to a range of social projects including housing, digitization, and LGBTQ rights.

The green and digital transitions are priority EU projects and viewed by many as complimentary. Yet van Sparrentak points out that there has been little focus on exactly how these two interact or how one might help or even hinder the other. Ensuring that the digital transformation doesn’t hamper the green transition is seldom considered because “they work in silos”, and that goes for the Commission, the Parliament, and the many NGOs working in both sectors, she explains.

How exactly are these two major transitions going to be organized in an optimal way? This is the question van Sparrentak and some of her colleagues have raised at parliamentary level. One possible answer has come from industry in the form of the One Green Label coalition. Initiated by a group of digital subject matter experts, it requires companies to complete a full life cycle analysis of their products before making sustainability claims.

“The Green transition is such a big transition that we can’t do it alone – we have to do it together,” agrees the young MEP. She is now working with the coalition to share their message and has already found substantial support in the European Parliament.

A similar critical focus on the European AI act has led van Sparrentak and her Dutch colleagues to question how effective it will be in preventing human rights abuses. “We have tons of decisions to make about how exactly we are going to digitize. Do we do it with humans in mind, do we do it with the environment in mind or not?”

Van Sparrentak explains that a recent benefits scandal in the Netherlands, which left over a thousand children in foster care and unable to return to their parents, caused the Dutch government to look more critically at the use of algorithms in decision-making. The result: the requirement of a fundamental human rights assessment on a case-by-case basis, designed to gauge the effect of AI on the rights of those involved.

So long as these movements from across Europe continue to move from the streets into the parliament, we will continue to grow.

The young Green MEP will be one of those pushing to get this approach included in the AI act for the whole of the EU. She admits that for her it doesn’t go far enough and, ideally, she would like to see the banning of all fraud predictive systems.

The fighting spirit that is so clearly a part of this young woman’s approach to political and social change is, she believes, also one of the key strengths of the European Green movement more broadly. “So long as these movements from across Europe continue to move from the streets into the parliament, we will continue to grow.”

For young people van Sparrentak has the following advice: “Be curious and keep asking questions – the moment you start to feel like a toddler who is in the ‘why phase’, that’s the moment when you’re getting somewhere.”