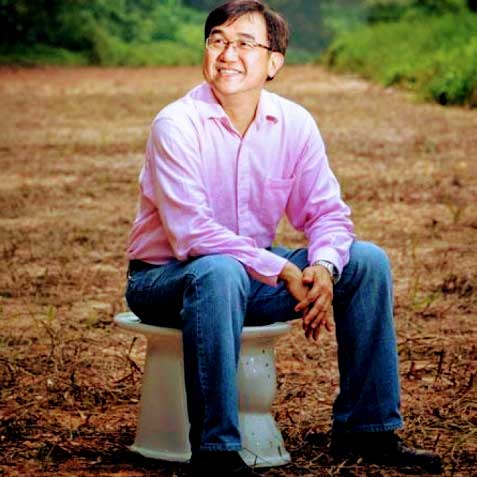 It is 20 years since Jack Sim founded the World Toilet Organization, to campaign for better sanitation and hygiene. In 2013, the United Nations designated November 19th as an annual World Toilet Day. When he talked recently with Driving Change, we began by asking Mr. Toilet, as Sim is affectionately known, about how he first got interested in sanitation, and about an influential meeting he had with Mr. Condom.

Jack Sim (JS): When I was at 40 years of age, I started to wonder when people die, and I realized they died at 80. So I was in a panic situation, because I’ve got only 40 years more to live. And how shall I live it in the most meaningful way, especially at 40? I’d already reached financial independence, doing 16 businesses. So I decided to quit all the businesses, sell them and buy some houses collect rent. And since then, 23 years now, I’ve been working for free on solving this sanitation crisis.

I took mentorship from another guy from Thailand they called “Mr. Condom.” I was thinking if he can do it for condoms, I can do it for toilets – after all, they’re in the same proximity. And he told me if you can make people laugh, and you don’t mind them laughing at you, then you can get them to listen. And when they listen, you tell them serious facts, and then you will change the way they think. So that was really good advice and mentorship.

Driving Change (DC): So Mr. Condom helped people understand that condoms are important, for sexual health and to avoid HIV/Aids and, and so forth. What was your mission in starting the World Toilet Organization?

JS: So in 2001, there were almost no media coverage about toilets and sanitation – because it was considered a very disgusting subject. So campaigners put the sanitation agenda together with the very glamorous agenda called “water.” The moment you put it under water, it went underwater – it drowned as an issue, because water is so important. Nobody pay attention to sanitation.

So I decided that we have to decouple these issues. And the way to do it is to make people laugh. So we call ourselves the WTO, like the World Trade Organization – but in fact we are a toilet organization. And the media loves it. And eventually, we became a media darling. And through this humor, calling a spade a spade, we were able to create a lot of following. And I think that every year we reach about a 2 billion-3 billion audience, on a budget of zero.

DC: So tell us what are the key things we should know about the toilet situation in the world.

But every year, still about 2 million people die of diarrhea, because of cross contamination. They shit into the river, they contaminate the water, people drink dirty water, they do not have water to wash their hands or they have no soap, or they don’t have the habit of doing that.

Toilet culture is still very, very primitive across the world, even in the developed world. A lot of men don’t wash their hands after they visit the toilet – we calculate it was 50% don’t wash their hands. Then along comes COVID-19 and everyone washes their hands because this is a life and death situation. Its ironic: if 2 million people, four million, die every year of diarrhea, there is no panic. There is no shutdown. But if 1.4 million people die of COVID then there’s a global shutdown. So I think we did not pay attention to poor people the way we pay attention to ourselves.

DC: And do you think that COVID has led to the behavioral changes that will actually improve people’s ability to survive the virus and stop the virus spreading? Has it had a material impact?

JS: In 2003, during SARS, everybody was very, very conscious about personal hygiene. But SARS goes away and all the bad habits came back. So this time, I really hope that the hand-washing habit stays, because after this pandemic, there will be other pandemics coming, we don’t know when. Hygiene is our first line of defense. A toilet and proper sanitation and hygiene is the cheapest medicine in the world. If you can prevent disease, you don’t have to cure it.

DC: What have been the policies that have worked in terms of changing the number of people that have access to good sanitation?

JS: Our work is the job of a storyteller. The power of a storyteller is to drive demand from people for a toilet. Politicians are, of course, very intelligent people. When they see that toilets are now popular, they start to promise toilets and use toilets as an election ticket.

So we have seen that telling stories about toilets eventually creates a lot of demand, that drives supply from politicians, because what the politician wants is popularity and power. This alignment is really, really working well. In India, first Minister Jairam Ramesh, from the Congress Party, built 32 million toilets, then Prime Minister Modi outdoes everybody by building 110 million toilets through his Swachh Bharat campaign.

And then President Xi in China – he doesn’t need to win an election, but he still needs popularity. And he’s also wise enough to say that with good sanitation, with clean toilets, we will have more tourists, and we will also have less sick people. So President Xi has now become a toilet champion. And when I went to see the toilet situation in China, I saw that it is improving very rapidly. Then, last year, the governor of Sao Paolo started to become a toilet champion. And he also went to the Senate in Brasilia to lobby successfully for their public private partnerships to be allowed to invest in sewage treatment, because 94% of all the Brazilian water companies are owned by the government, and 50% of all the sewage is not treated. These are examples of how storytelling can mobilize political will.

DC: I remember we met once and you were talking about potentially doing a Bollywood movie about sanitation, with lots of toilet humor. And I think this year you’re celebrating World Toilet Day with a rap video. Is that right?

JS: It is a hip hop song by an Indonesian artist, and I think it goes very well. It’s called Talk Shit. When we went to traditional radio stations, they refused to play it. They told us, you know, we love the song so much, but we cannot have it on air, because our law says we cannot air the word shit. And I told him this is precisely the problem. That’s why we have worked so hard against the tide, and have succeeded. Now we have got YouTube, social media, you can go to Tik Tok, Instagram. Nobody can stop us!

DC: So where’s the biggest challenge in the world now, to actually get proper toilets and sanitation?

JS: I think the developing world at large – India, Africa, countries in Southeast Asia like Indonesia, Philippines, Myanmar, there are a lot of such countries. And the favelas in Latin America. There are so many places that need improvement.

DC: You persuaded the UN to declare November 19th World Toilet Day, and we’re talking a couple of days ahead of that. What has been the impact of making this an official UN day?

JS: It’s tremendous, because sanitation suffers from a lack of legitimacy. It is a brown issue: all the philanthropies and corporates, they like blue issues, green issues – icebergs melting, and trees. And these are things they love very much because they are very compatible with branding. But a brown issue like shit is really difficult to brand. And so when we got the United Nations Day on the 19th November, it created enough legitimacy for governments to declare it a policy priority and to seriously look into the matter. So I think that ever since 2013, the first UN World Toilet Day, a lot of governments have taken action. And by the way, this is the first time my country Singapore has tabled a UN resolution by itself. And it’s a very proud moment for our country as well.

DC: I gather that it was a Prime Minister of Singapore who said, “Do you judge a country by the dullness of its toilets?” that really got you started on this issue in the first place?

JS: Yes, a former Prime Minister said, “We should measure our graciousness against the cleanliness of our public toilets,” that got me started. At first, I was cleaning up Singapore’s public toilets, incentivizing the people to say, “You know, you’re losing a lot of money in the shopping center, because the toilets are dirty and people leave your building, and you lose a lot of shopping.”  So they start to say, “You’re right, so I’m going to clean up.” And then we go to a school and tell the principal, “You know, your children are not getting very good marks, because they are suppressing urination. When the toilet is smelly, they wait until they go home. And then they cannot concentrate in class.”

Slowly, more and more people are realizing that sanitation is so important. World Toilet Day has helped that happen.

DC: What’s your key message to policymakers around the world?

JS: This year, we have to realize that hygiene and sanitation are our first line of defense, not just against COVID, but all the time. When we have hygiene and sanitation, we will have healthy people, productive people. And then we can train them, attract investment, create great jobs, great GDP and, of course, tax them too. And then you don’t have to pay for so much health care and you can increase the GDP of the country.

I grew up in Singapore in 1957. Singapore was so poor, one of the poorest countries in the world. And our GDP was $500 per capita when we became independent in 1965. And today, it is one of the top four richest per capita in the world. How did we do it? By having healthy people, by preventing diseases before they happen. So prevention is always cheaper than cure. And a toilet is the cheapest medicine in the world.

JS: Thank you very much. Everybody please talk about shit, because what we don’t discuss, we cannot improve.