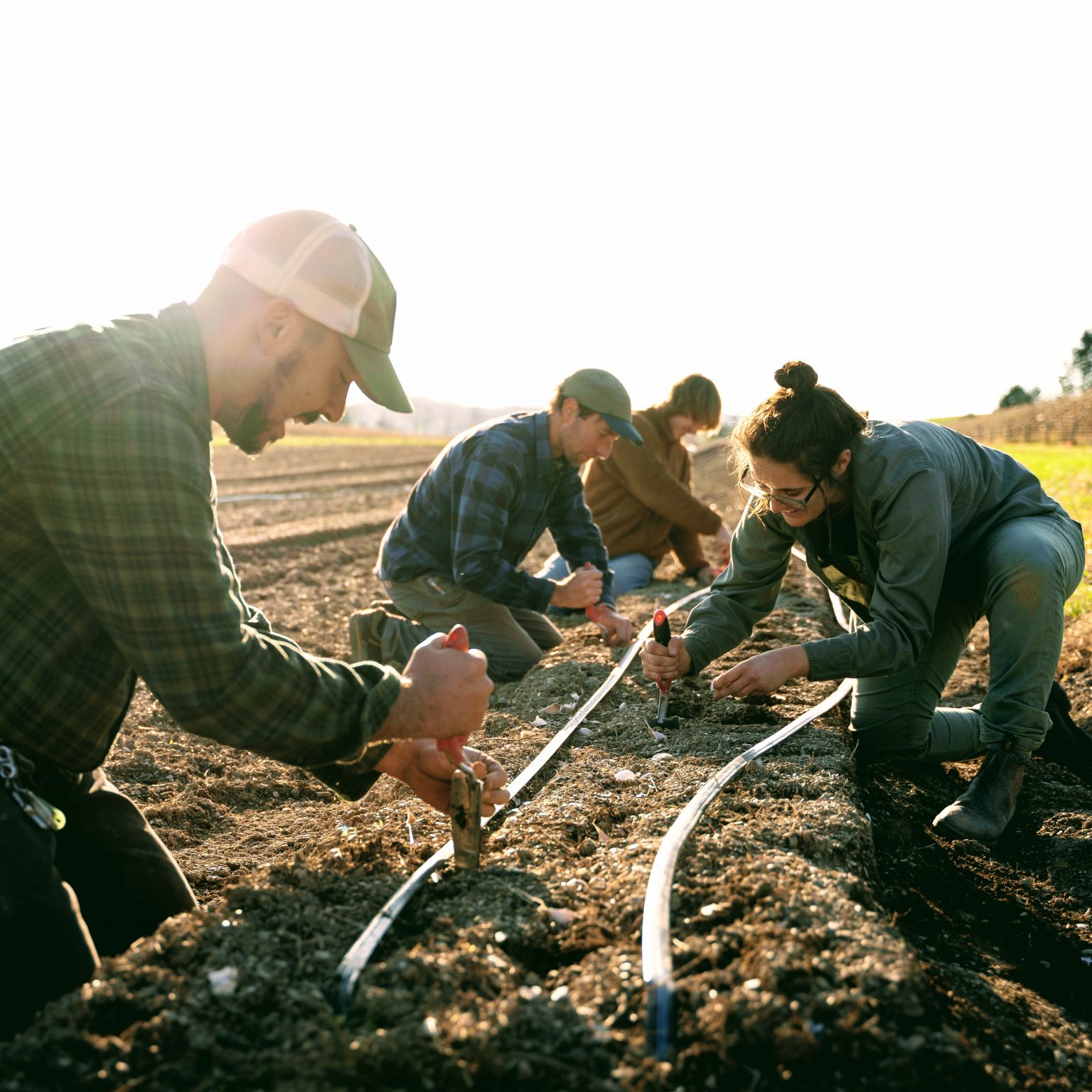 The big idea now animating food futurologists is “regenerative agriculture”. Named in 1989 by an organic farming evangelist, Bob Rodale, the idea is to grow food in ways that achieve multiple benefits simultaneously, as soils trap carbon, farmers make better incomes, and companies deliver on the promise of more nutritious food.

In his seminal interview that year, Mr Rodale said: “I prefer the idea of a regenerative agriculture. I’m not satisfied with the term sustainability. It’s very appealing to policymakers because they think it’s simple to understand it. But the public, I don’t think the average person aspires to live in a sustained environment. They want to live in something that’s expanding and getting better. So the idea of regeneration is more appealing.”

Today even the biggest agriculture and food companies are listening, as the Pennsylvania-based Rodale Institute has become one of the main players in research and advocacy work to encourage farmers and policymakers to adopt regenerative organic practices. Cargill, Walmart, General Mills, and Patagonia are all pushing for regenerative agriculture – albeit in quite different ways.

While Patagonia has been a catalyst in a new regenerative organic certification, “ROC”, that has been adopted by like-minded brands, larger agricultural companies are also making commitments to regenerative farming.

That their commitment does not necessarily also include a pledge to farm organically is troubling to some. Diana Martin, Director of Communications and Media at the Rodale Institute, says it has left “regenerative agriculture” at a crossroads because it’s a term that’s being used increasingly frequently even as it lacks a uniform definition. “We don’t really have a standard for the term ‘regenerative’ right now. So, yes, there is a possibility of greenwashing.”

For Elizabeth Whitlow, Executive Director of the Regenerative Organic Alliance, “Regenerative was such a fringe movement. People struggled to pronounce it even, stumbling over it,” she jokes. “But now everyone’s jumping on the regenerative bandwagon.”

The immediate challenge is to mainstream clear rules before a muddy concept of regenerative agriculture can take root. That will require a sharper focus on the three main pillars of what is more accurately described as “regenerative organic”, which builds on existing organic farming practices: improving soil health, ensuring animal welfare, and encouraging farmer well-being. This is the “most rigorous definition and has the most teeth to it”, says Ms Whitlow, which is why it is at the core of the ROC certification.

Unlike traditional organic farming, which focuses just on what can and cannot be applied to farms to manage pests and weeds (namely avoiding a laundry list of synthetic herbicides and pesticides), regenerative agriculture also pays attention to what role animals play on the farm, encouraging biodiversity, as well as farming techniques including “cover cropping” and “minimal tillage”. Regenerative farming advocates want to move away from the large monolithic farms that plant only one crop and rarely incorporate animals in their daily farming techniques, transitioning instead to smaller, more diverse operations.

Ms Martin explains that one way to improve soil health is to integrate animals through rotational grazing, which can provide fertility and biodiversity to a farm. “Although livestock farming has been given a really bad rap in the media, grazing animals can actually be part of the solution. Just not in the way that we have been raising them for the past few decades across most of America.”

Patagonia, Dr. Bronner’s, Nature’s Path, White Leaf Provisions, and Lotus Foods are some of the first brands to adopt the Regenerative Organic Certification, while working with farmers around the globe. Patagonia has a pilot project of ROC cotton in India; Dr. Bronner’s is selling coconut oil from Sri Lanka; and Nature’s Path, oats from Saskatchewan, Canada.

Whilst not requiring an organic certification, the larger agricultural brands are coming up with their own framework for regenerative. This includes a lot of the same farming practices, a focus on animal welfare and better pay for farmers. “It’s always good to get more farmers to adopt these practices,” acknowledges Ms Whitlow, before noting sceptically that “if you look at the fundamentals of regenerative agriculture – it is about soil health, and you cannot really do that if you’re poisoning the soil with chemicals.”

The case for regenerative

What makes regenerative farming potentially such a gamechanger is its focus on soil health. As CO2 emissions have continued to increase around the world, turning up the planetary temperature, companies are increasingly trying to figure out how to reverse the trend. Turns out, soils hold carbon well – provided, that is, they’re not plagued with pesticides, have to battle runoff every season, or are regularly tilled with industrial farming equipment.

It is the race to trap carbon in soils that has companies looking at regenerative farming as a way for them to level out, or preferably reduce, their emissions and footprint. And while dairy farmers and America’s meat industry have received a lot of criticism for the greenhouse gases emitted from livestock, regenerative farming advocates argue that, their climate changing farts notwithstanding, animals are, in fact, needed on farms.

Will Harris, who runs White Oak Pastures in southern Georgia, a self-described fourth-generation cattleman, looking after land purchased by his great grandfather in 1866, is one of the early adopters of the ROC certification. Though his farm had practiced conventional agriculture in the 70s and after, in 1995 Mr Harris decided to deviate from monoculture farming and diversify. Now, he oversees more than 3,000 acres that are home to cattle, sheep, pigs, goats, rabbits, geese, guineas, turkey, chickens, and ducks. It is a zero-waste farm, with a slaughterhouse on site, and any unused bits, such as broken eggs not suitable for sale, can be given as feed to other animals, form the basis of compost, or be repurposed into other retail items. For example, leftover beef tallow and fat is infused into skin creams and poured as candles.

By letting all these animals roam on the land freely, and graze on a diet of local grasses and plants, White Oak Pastures hopes to not just raise better quality meats, but also sequester carbon.

By converting annual cropland to perennial pasture, rotating the animals through the pastures to graze, and incorporating other regenerative practices such as producing compost on site and then applying it on the soils, the farm is reportedly storing more carbon in the soil than their cows emit during their lives (based on the LCA’s 2017 data). According to studies conducted on the farm, White Oak Pastures is offsetting at least 100% of the farm’s grass-fed beef carbon emissions and as much as 85% of the farm’s total carbon emissions.

“Our farm is creating more in terms of organic matter in the soil and microbial biodiversity than it is depleting,” says Mr Harris. “This shows that it is possible for humans to positively contribute to the environment through our food production system – using holistic management and planned grazing of livestock.”

Though the buzz around regenerative farming is strong, in America at least there are some obvious hurdles to be overcome if the movement is to grow to its potential.

Traditional organic farming has been expanding very slowly in the States, even though the consumer appetite for it is growing, explains Ms Martin. Currently only about 1% of US farmland is certified organic. Yet customer demand for organic produce and goods is going up: 15% of produce purchased in 2019 was organic.

In comparison, the EU has 7% of farmland as certified organic. Countries such as Austria, which have the highest percentage of organic farms in the EU, have been supporting local farmers for over a decade now. In 2011, it paid 168m Euros to farmers to grow organically. Since organic conversion can take three years, and there can be added costs initially (such as more labor) along with less yield, farmers are guaranteed that they’ll be paid and be profitable, which makes going from conventional to organic easier.

Another challenge is infrastructure. Few processing sites exist for organic farmers, for instance.

David Vetter, a third-generation farmer in Nebraska’s corn country, is filling that gap. He’s a bit of an anomaly, growing regenerative organic grains on his family farm in a state that’s been historically dependent on chemical agriculture. To get more farmers to consider the organic way, the Vetters started a grain processing business. By simply having a processing unit where organic farmers can come and dump their harvest, he helps ensure that the final product gets a certified organic seal and that a local market for organic grains flourishes.

Mr Vetter argues that the organic and regenerative movement will take off when the economic incentive is made clear to farmers. Basically, farmers can make more money growing an organic crop, says Ms Martin: “The commodity market has tanked. Currently, organic grains are fetching twice the price of conventionally-grown grains.”

“Plus, once you go organic, you’re saving money on all those inputs you’d be buying from the market. I literally don’t have to buy anything for my farm. Every aspect of the farm supports each other,” adds Mr Vetter.

Since America doesn’t grow enough organic crops to meet its domestic demand, it is reliant on imports to meet consumer demand. “Imagine if we could be producing all that ourselves, instead,” says Ms Martin.

The Rodale Institute has been consulting farmers, and policymakers, on how to transition to regenerative organic. They get calls from around the world, from cattle ranchers in Argentina to dairy farmers in the US to vegetable growers in Europe.

“We want to free farmers from the agrichemical hamster wheel”, says Ms Martin. “All the expensive inputs of fertilizers, pesticides, and GMO seed are cutting into their profit margin. [Unlike some of the big old corporate suppliers to farmers] we are not selling any products. We are just empowering farmers to be self-reliant. It’s a totally different model.”