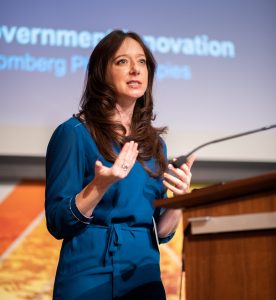 Innovation. Design. Government. These words are often not listed together. Yet, spend ten minutes speaking with Stephanie Wade and it is clear there is a natural fit.

As the director of the first federal human-centered design lab, she had the opportunity to influence how the government does its work, and to train others in using design so they too could make the federal government more effective.

Her work there from 2014-16 impacted everything from critical services such as the school lunch program to how the U.S. government fills jobs openings.

Wade then brought her human-centered approach to Bloomberg Philanthropies, where she and her team led innovation programs in 50 cities in 12 countries around the world. In doing so, they helped city leaders and their teams build a culture of innovation focused on tackling big problems and delivering better results for residents.

How does someone end up leading innovation programs in the government? Where does someone learn the iterative approach to problem solving that is called human-centered design?

Hers was a path that, as a student, Wade never imagined. In college, she studied art and sociology and combined her deep creativity as a dancer, singer, and photographer with studies in how complex systems work and how we interact with each other.

Upon graduation, she found an entry-level position at Boston’s Museum of Fine Arts to feed her artistic side before moving into politics as a legislative aide in the Massachusetts State House to feed her “sociology side”.

Now bitten by the politics bug, Wade moved onto Harvard’s Kennedy School. Yet instead of heading straight to the public sector, she went into the private sector on the advice of her dean to round out her work experience and gain additional professional tools.

The first day in class… it was literally like the clouds opened up, the music played, and the light came down… I have never looked back.

By joining the consulting firm, Booz Allen, Wade was employed by the private sector, but worked on projects in the public sector. During this time, she was exposed to a variety of departments in the federal government. After six years, she started to wonder, “where did my artist-self go?” and began looking for her next move.

Fortunately, it found her in the form of a new initiative at Booz Allen. They were training a new cohort to become experts in human-centered design so they could build the practice as a new service offering. She was not entirely sure what it was but found it progressively more interesting as she interviewed for the program and was selected to join this new cohort.

“The first day in class, when I still didn’t really know what this was, one of my teachers, who is a good friend to this day, told a story about using human-centered design to redesign services for women who weren’t able to get access to healthcare in Africa. And I started to cry. And it was literally like the clouds opened up, the music played, and the light came down. This was exactly where I had been looking to move to in my career, to radically change people’s lives for the better. I have never looked back.”

For Wade, human-centered design “is really powerful. This combination of designing new ideas and also becoming an interpreter for design to create culture change from the inside out was very fulfilling.”

I need to take on the big issues. The more complicated and the harder it is, the more excited I get.

When she joined, her mandate was to build staff capacity to learn and apply human-centered design to their work, and to create efficiencies in the work of the Federal government.

What did this mean in practice? Her team partnered with the U.S. Food and Drug Administration to increase access to healthy school lunches for children around the country while at the same time saving $600M in taxpayer dollars. By looking at the problem from all angles, including the perspective of the parents and schoolchildren, the team came up with a solution that made it easier for parents to apply for the school lunches by using clear and intuitive language, simplifying instructions, and improving the user interface on the website parents used.

In another project, Wade’s team worked on the Federal government’s hiring portal, USA Jobs.  They quickly learned that hiring is a pain point in the federal government from both sides – the person who is trying to get in and the manager trying to hire talented individuals. “We went around the country talking to students, veterans, you name it, conducting a country-wide listening tour.”

They decided that the first thing to do was to improve the front-end experience, fast, by updating the USA Jobs website. They streamlined it and made it more user friendly, so the applicant would know exactly where they were in the process, what they needed to submit and what had been successfully submitted. It was a huge success, although only a first step.

After a few years in this role, Wade moved to Bloomberg Philanthropies where she led the foundation’s innovation and human-centered design programs to help over 100 cities around the world innovate by co-creating ideas for solving complex challenges within communities, including historically under-represented residents, and building a culture of innovation.

Human-centered design is really powerful. This combination of designing new ideas and also becoming an interpreter for design to create culture change from the inside out.

She sees a need for this approach to innovation only growing in the coming years and decades. There are still many areas where innovation is needed but where these approaches have yet to be tried.

For those who are less interested in building out deep tech skills, but still want to be involved in government innovation, there will be a growing need for people with strong project management and critical thinking skills. There will especially be a need for people with community engagement experience. These are “people who have really great skill and eye for being out on the ground with the people who we are trying to serve and helping to build relationships with the community so they become co-creators in new government programs and services.”

As for Wade, she recently left Bloomberg to set up her own consulting firm, Ascendant, working on projects at various levels of government. Why is she passionate about this kind of work?

“I’ve worked in a lot of different ways and places, and I have been around public service and social impact my entire life. In addition to the fact that I am so dedicated to making the world a better place, I also need to be really challenged; to take on the big issues. The more complicated and the harder it is, the more excited I get.”

Made in Africa: A Conversation with Yawa Hansen-Quao