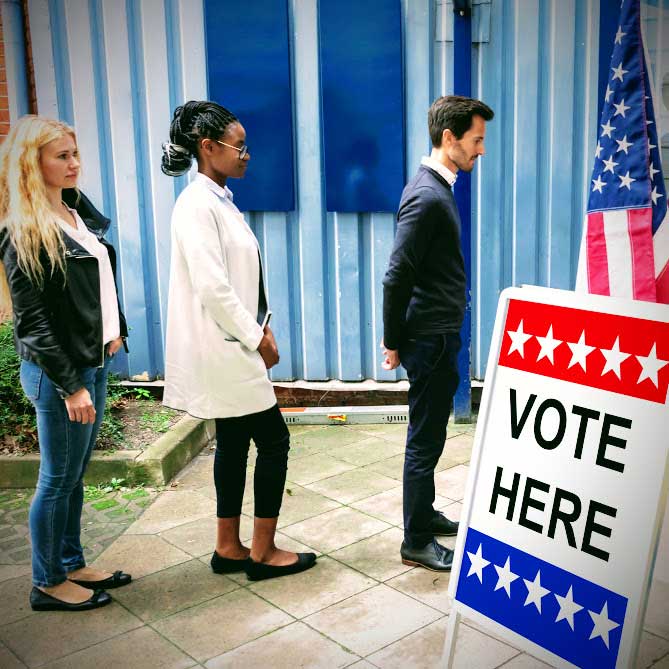 On November 3—and for much of the week afterwards, as what usually takes one day was stretched out over five—people around the world found themselves glued to the US election. Viewers were regaled with stories of how Americans achieved the highest turnout in more than 100 years: waiting for up to ten hours in line once early voting opened in October; the flood of Democrats that turned to postal voting and, eventually, delivered Joe Biden to victory; the Republicans who appeared in person on the day itself.

All these methods of voting seemed problematic. The long lines were, to some, evidence of  voter suppression by the GOP. The late counting of postal votes allowed President Trump to rile up his base with false claims of electoral fraud. People cramming into polling stations did not appear entirely sensible during a pandemic. Elsewhere, the coronavirus has led to postponed elections in several countries including Bolivia, with the delay leaving the country in the hands of an unelected caretaker president.  In a time where everything from grocery shopping to work meetings to doctors’ appointments are conducted online, it is easy to wonder why most citizens are still voting the way their grandparents did.

Those searching for a better way might look to Estonia, which has offered universal online voting since 2005—currently the only country in the world to do so. Other nations appear keen to follow suit: 56% of French citizens say they’d like to vote by computer or smart phone; Australia, Canada and America have all experimented with limited forms of online voting, for example for military personnel oversees. But it is unlikely that most people will be able to vote with a click of a mouse or tap of a screen any time soon: several factors make Estonia’s system hard to replicate elsewhere.

In 2002, Estonia’s government passed legislation allowing voting to be moved online. It had already been pursuing an ambitious digital agenda: every school in the country had been given computers and 10% of the adult population was given free computer training. The idea of electronic voting had gained popularity in the previous year, when an “e-Cabinet” solution was introduced allowing cabinet ministers to vote on agenda topics online. The 2002 legislation dictated that online voting for elections couldn’t be implemented for three years, to ensure that there was enough time to develop a safe, usable system.

The first elections allowing online voting were, therefore, held in 2005. To cast a vote, citizens had to use their digital ID cards, which the government had started distributing in 2002 and which allow secure remote authentication and the creation of legally binding digital signatures using the state’s public key infrastructure. Just 9,317 people—1.9% of the electorate—voted online. Most of these, laughs Florian Marcus, were “tech geeks, always on the lookout for the next new solution.” Marcus works as a Digital Transformation Advisor for e-Estonia, a partnership between the IT industry and the government, where he briefs other nations on Estonia’s digital tools.

But online voting quickly entered the mainstream. “The sticking rate has proved to be extremely high”, Marcus explains . “If you try it out online, you will not go back to paper [voting].” In the 2019 European Parliamentary elections, 46.7% of the population voted online. Marcus expects this figure will continue to rise, eventually reaching 70-80%. (“Some people”, he admits, “will always want to vote on paper”.)

Originally, Estonian officials expected that online voting would be particularly attractive to younger voters. That ended up not being the case, explains Arne Koitmäe, head of the State Electoral Office. “We found that internet voting is not dependent on age”. It turned out to be particularly popular with older rural voters, who might otherwise struggle to get to the polls. Koitmäe says that the Electoral Office is now working to make online voting more accessible, by trying to make it possible on smartphones as well as computers.

What about other countries?

Countries wanting to copy Estonia might run into difficulties. Estonia’s online voting system relies entirely on mandatory ID cards, which will likely not be accepted in countries with widespread fear of government intrusion, like the US.

The system also requires an extremely high level of trust in the government’s digital capabilities. Estonians are long used to interacting with state bureaucracy online, including filing their taxes—practically the only things Estonians can’t do via the internet is get married or transfer property. It is widely accepted within the country that any data on citizens is not centrally held, and is always available to view and expunge at the citizen’s request, decreasing the possibility it will be stolen or misused. The government also works to increase trust by publishing the source code for the voting application ahead of every election.

Estonians are confident that their system is safe from outside interference. The country tightened its security after 2013, when American election monitors pointed out various flaws.  “Because of the way that encryption works these days, to intercept a vote, you would have to know exactly when it was happening, and through which network,” explains Marcus. “You would have to decrypt the vote in a split second, change it, then encrypt it again with a legally valid key so the receiving server wouldn’t notice the difference. It’s technically possible, but realistically impossible. And even if you did pull all that off, you would only have changed one vote!”

According to Marcus, the biggest threat to Estonian elections is the same as elsewhere: mis- and dis-information. But, in other countries, safety concerns preclude the use of online voting in national elections for now. Switzerland and Norway abandoned experiments after worries their systems weren’t secure enough. Lithuania shelved its own technology because it felt Russia would interfere. Those wanting to vote from their desk chairs will have a while to wait yet.