Sharing is Caring: Equity through Micromobility 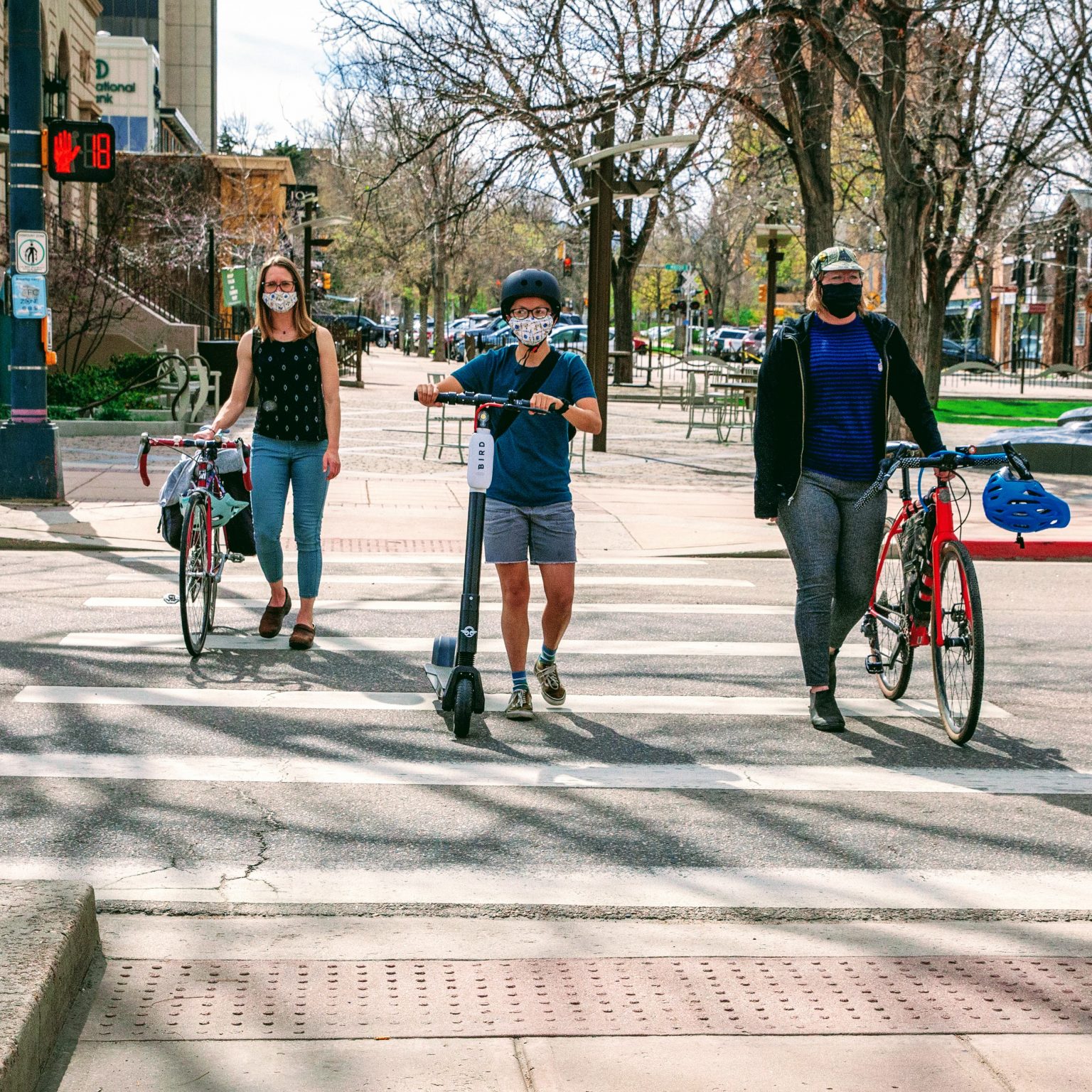 When it comes to commuting, research shows that a mix of faster and more carbon-friendly ways of getting around bring outsized financial and health gains to low-income communities. Either paired with mass transit or on its own, shared micromobility’s range of bikes, hoverboards and e-bikes and scooters—even-e-wheelchairs — cuts trip time to better education, jobs and necessary services such as healthcare. These alternatives are often available at all times of day, even when mass transit runs less frequently.

Yet in New York City, just 30% of low-income neighborhoods were served by Citi Bike in 2019 versus all of its high-income neighborhoods. To expand micromobility’s benefits, research is increasingly examining why access to and use of nonmotorized sharing programs are lower in these neighborhoods, beyond an implied – and disproven – lack of interest. An NYU Stern School of Business report, for example, found that sharing economy studies often assume a lack of demand when designs have not sufficiently vetted user needs. 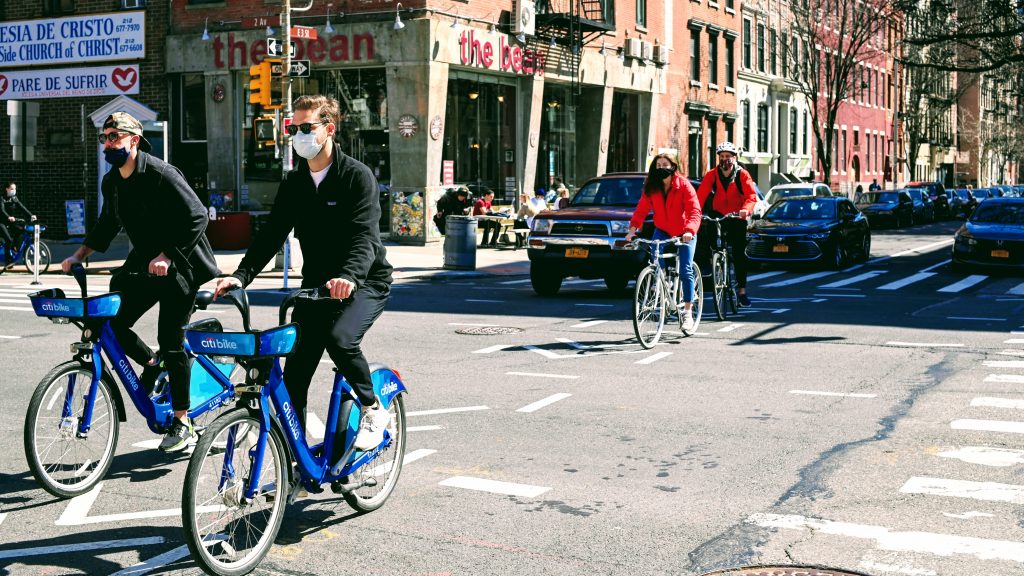 Indeed, researchers at Portland State University’s School of Urban Studies and Planning found that 74% of low-income people of color in three areas it studied – Philadelphia, Bronzeville in Chicago, and Bedford-Stuyvesant in Brooklyn – said bikeshares could be useful, while 86% of them said bikeshares were good for the neighborhood. Over half said they would like to use bikeshare more than they currently do.

Holding back the gears

So why the wheeled resistance? Even with an abundance of shared vehicles, top barriers to their use include a lack of dedicated lanes or unsafe access to them, as highways tend to cut through the poorer fringes of cities. Austin, Texas in 2016, for example, noted that nearly one third of its most dangerous roadways were in areas with Black or Hispanic populations of 25% or more. At a time when many global governments are looking to build back better for the environment, jobs and competitiveness, serious investment in roadways with parallel paths for fast and safe passage to and through crowded transit corridors and easier ways to reach them is sorely needed, along with a mix of readily available micromobility options.

Even with an abundance of shared vehicles, top barriers to their use include a lack of dedicated lanes or unsafe access to them, as highways tend to cut through the poorer fringes of cities.

No or tone-deaf outreach is another obstacle. Often majority-minority neighborhoods are wary of bike share programs. Many believe their arrival presages gentrification. Also crimping demand for their use is scant information about safe streets for riding, including not being harassed or the victim of a crime.

Lastly, costly memberships, onerous terms (many require hefty security deposits and charge exorbitant non-return fees), credit card only payments and/or a need to register by app are other hurdles. Among those earning less than $40,000, 39% credit card applicants were denied credit in 2019, according to the US Federal Reserve; roughly two-thirds of those who earn under $30,000 a year do not have a smartphone, according to Pew Research. 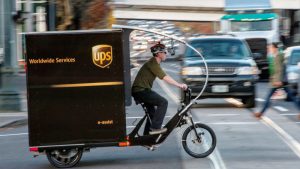 Much can be done to level the riding field. Findings from successful bikeshare equity experiments can show the way.

Highly targeted (and flexible) placement of dedicated lanes and shared devices based on fluctuating use invariably spurs greater usage. Methods to determine locations include quotas to ensure that the number of vehicles within low-income communities sync up with their ethnic and economic make-up; report cards that grade ridership, equity and financial sustainability; the rapid redistribution of devices to transit deserts; and station location near community service centers all help. San Francisco does this, and as a result roughly half the city’s scooter trips begin or end in ‘Communities of Concern.’

Another route to improving equity is connecting bike, bus and rail payment systems by providing discounts for memberships or ride time.

As for getting the word out, creative outreach about micromobility’s benefits, opportunities and discounts in person or by campaign via oft-visited community centers seems to work well. Pittsburgh offers free membership in itsbikeshare program to qualifying groups through housing agencies, tax prep aid organizations and food banks. At Cleveland, Ohio’s open-street and community events, locals can try out bikes and register for bikesharing. Aspen-Basalt holds ‘learn to ride’ classes and builds bikesharing awareness through its ‘Movimiento en Bici’ program, in Spanish – sometimes outside highly frequented libraries. Trained community-based Bikeshare ‘ambassadors’ in Philadelphia lead rides; the city also aims to inspire through a storytelling initiative, with blogs and videos recounting biking successes and challenges. Other examples abound.

Workarounds for payment include cash payment options, discounts (also for helmets), free passes, and pre-paid smart cards plus assurance that contracts and/or fees are honest. A bikeshare equity program in Zapopan, Mexico program encourages shared micromobility operators to offer services to those without credit cards, bank accounts or smartphones. Citi Bike has a reduced fare program for SNAP (food stamp) recipients. It also provides grants to boost access to mobility in communities of color and for those with lower incomes through the Lyft Up and Bike Share for Youth programs. Its local Better Bike Share Partnership, a private-public consortium, helps on such programs.

Another route to improving equity is connecting bike, bus and rail payment systems by providing discounts for memberships or ride time. Portland’s Transportation Wallet, for example, discounts bike share fees for regular mass transit riders when these services are bought together. 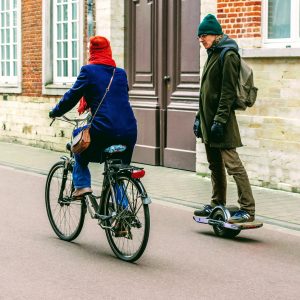 Looking beyond bikes, Robin Chase, a transportation entrepreneur who cofounded Zipcar, Veniam and NUMO, sees mobility inequities solved by a mix of wheeled devices that will get us out of costly cars and connect us to mass transit hubs.

Just half of Americans can easily get around at any given moment, she says, owing to our overdependence on autos. This counts those under 16, with suspended licenses, the physically impaired, the elderly, and those who can’t get licenses or afford a car, let alone two —a hardship that is particularly pronounced among minority families. Compare those figures to those for difficulties crossing highways and dangerous streets, she says. “Over the last 100 years, we’ve made it safer to cross the ocean than the street,” she notes. “An unnoticed half of people are completely trapped. We can’t get to work, buy food, get our kids to school. This is not an urban, rural, left, right issue. All humans have lost their ability to have independent autonomous movement for small trips, half of which are less than three miles—73% done by car today.”

Can Micromobility Make our Cities, Skies and Lives Healthier?