Rebecca Burgess’s Quest to Transform Cotton into a Regenerative Crop

Bay Area resident Rebecca Burgess started with a simple idea: can I make an outfit sourcing cotton, wool, and other fibers from farms within 150 miles of California’s Marin County? To her surprise, it was possible. But farmers were not connected to designers or brands to scale their operations. Meanwhile California was dealing with degrading soils, chemical-laden agriculture, and droughts.

To connect all the dots in the supply chain, she established a non-profit, Fibershed, which brings together farmers, scientists, companies, and experts to rethink how clothes are made. Through Fibershed, farmers can engage with researchers to collect better data on their land, engage with companies to find a market for their crops, and help one another create an ecosystem for regenerative farming in the state. Over the past decade, Burgess and Fibershed have become a go-to resource for the local textile economy.

Cotton is one of the fibers that Fibershed has spent considerable time researching. It has started working with farmers on how the crop can be grown in a more regenerative fashion. The U.S. is the third-largest producer of cotton after China and India. And though the bulk of cotton production may have shifted to Texas in the last 20 years, California is still known for its Pima cotton, a long-staple variety. 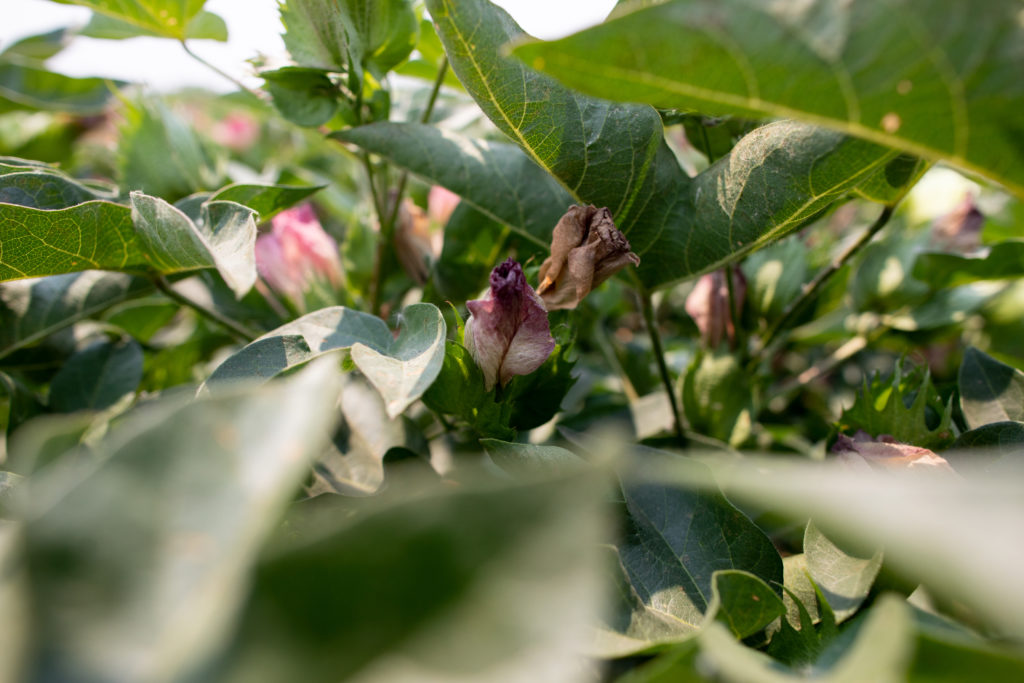 Credit: Paige Green/ Fibershed
In the San Joaquin Valley, where this cotton is grown, vistas are vast and expansive. Though this is California’s agricultural core, a swath of farmland responsible for producing the country’s fruits and vegetables, it’s also home to about 200,000 acres of cotton.

In a landscape that is often wrestling with water shortages, cotton can be a contentious topic: it’s been referred to as the “water-thirsty” crop. However, crops such as alfalfa and almonds, which are also grown in the region, tend to drink up more water than cotton. Plus, there are concerns about pesticides: cotton has historically been treated with a heavy dose of pesticides. Yet, California is one of the few places in the world, if not the only one, Burgess notes, that pesticide use is highly regulated and documented on cotton — meaning farmers are encouraged to use as little as needed, and it’s monitored by regulatory bodies.

“Let’s acknowledge we have a system that’s very chemical heavy,” she says. “That’s why I and Fibershed have taken the route of trying to figure out an agronomic recipe that reduces, or eliminates, these chemicals if possible. But it’s not easy when spraying a pesticide costs a farmer $30 per acre and hand weeding costs $2,000 per acre.”

We do see some positive signs in soil organic matter and microbiology… Time will tell, and we have no reason to believe that we cannot make significant improvements.

Regenerative techniques, which include using cover crops to keep soils fertile, rotating crops every season, mulching crops to retain water, and minimal tilling to lock in carbon, are not just on trend, but smart farming, Burgess adds. All these practices help increase organic matter in soils, reduce a farmer’s dependence on irrigation, and help capture carbon.

Lynette Niebrugge of the Carbon Cycle Institute, a California-based organization looking at the science behind regenerative agriculture, says, “An increase of 3% in soil organic matter, that is going from 1% to 4% in organic matter, in the state’s more than 20 million acres of arable land would transfer an estimated 1.5 billion tons of CO2 from the atmosphere to the soil.”

The Carbon Cycle Institute has been working with Burgess and California farmers to test this and document the process. (The richer the soil is, the greater its potential to hold down carbon.) This is not restricted to organic growers only, Burgess says. Rather she hopes that all farmers — of size and style — will welcome aspects of the regenerative approach. 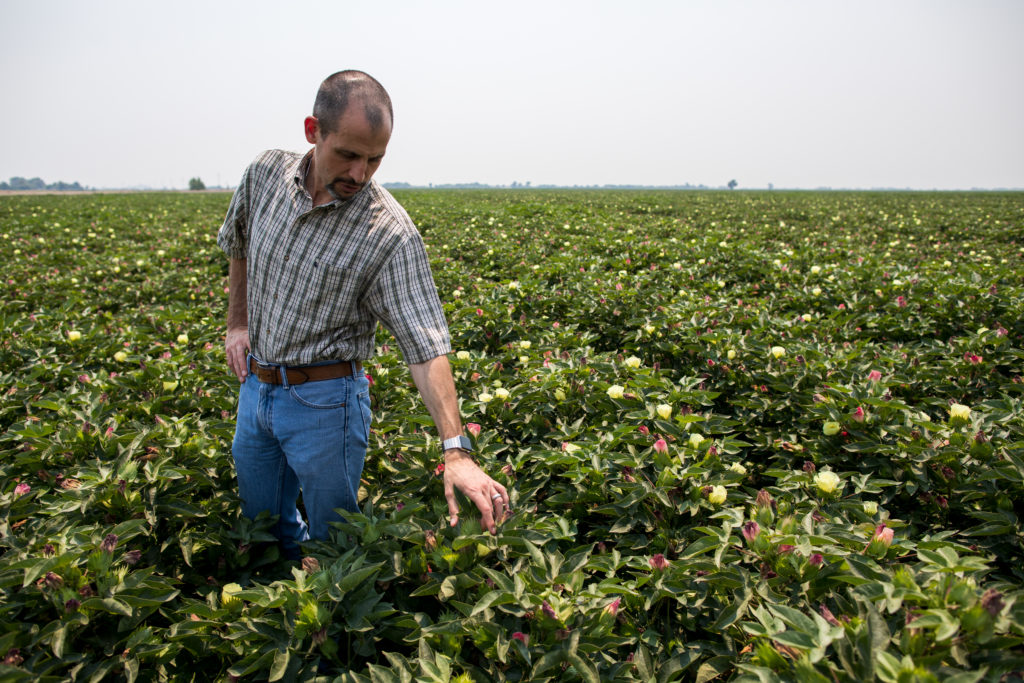 Credit: Paige Green/ Fibershed
To make it easier for them, her organization, Fibershed, has developed a Climate Beneficial Verification program for cotton farmers in the region: Fibershed helps farmers come up with a carbon farm plan, tailoring it to the crop and geography of that farm specifically. They then help create connections between farmers and buyers — brands that are interested in Climate Beneficial fibers — to ensure that there is a market for farmers who put in the extra effort.

Cannon Michael is one of the farmers doing a series of pilot projects to make cotton on 2,000 acres of his family farm more regenerative.

As a sixth-generation farmer who once shifted to the city, built a career in real estate and then decided to come back to farming, he’s a savvy businessman as well as a cotton expert. Now, he has become one of Burgess’ go-to examples of how regenerative farming can work for large scale farmers. The Bowles Farm, where Michael serves as CEO, is not certified organic. However, it is piloting projects to determine the carbon content in its soils, has a program to support bird diversity in the area, and is growing an array of crops through intercropping and rotations. So far, it’s working, he says.

“We do see some positive signs in soil organic matter and microbiology,” Michael says. “Time will tell, and we have no reason to believe that we cannot make significant improvements.” 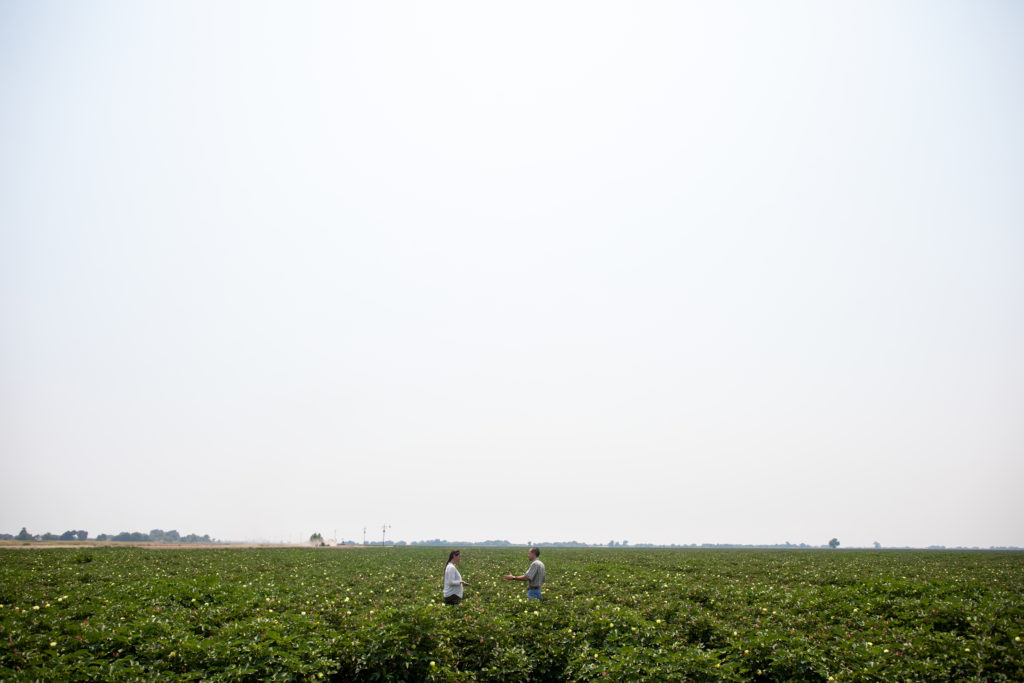 Credit: Paige Green/ Fibershed
Some of the tweaks have been simple but impactful, he explains. For instance, they reduced the number of passes with tractors on their fields. That meant less soil disturbance and fewer emissions from the machinery. In addition, they’ve cut down on their use of synthetic nitrogen, opting instead for natural alternatives and compost. In fact, cotton doesn’t need to be fertilized heavily, making it a suitable candidate for the regenerative experiment.

Cannon is shy to make any bold statements yet or attach himself to jargon such as regenerative and sustainable. He argues that most farmers will start converting when they can see the economics behind it working as well: if yields are up, inputs are cheaper or more cost-effective, and if there’s a thriving market for their crops. “We see a lot of promise and potential but are taking a measured approach,” he says.

Though he has sold some of his cottons directly to big box retailers, such as Bed Bath and Beyond and Costco in the past, many California farmers do face one significant hurdle: organic cotton can be sourced more cheaply from abroad nowadays. Yet, if it can be proven that these fibers are working to regenerate California, Burgess is hopeful that more brands will be interested in homegrown fibers and thereby, some of these large-scale farms in her backyard can be made to be more eco-friendly.