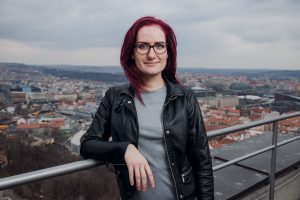 Markéta Gregorová, a 28-year-old MEP (Member of the European Parliament) representing the European Pirate Party, became a Pirate in her teens. She says she has always been an activist at heart and remembers listening intently to her grandfather while watching the news with him when she was a child. “I was born this way!”

The Pirate Party started in Sweden in 2006. When its initial website launched, it garnered huge support within 24 hours of going live and by its third day, the party had enough signatures to register as an official political party in Sweden. Its rapid growth also attracted attention from both national and international press, including major news organizations such as the BBC.

The party was originally a single-issue party focused on reforming copyright and patent laws. Its initial declaration stated that, “The Pirate Party believes that people with access to free communication, culture and knowledge grow, feel better and create a more enjoyable and humane society for everyone to live in.”

“In an ideal system, people would have enough information and education to make an informed decision regarding voting,” explains Gregorová. Such an approach allows individuals to chart their own course in this information age. “Pirates was established as a party to set up an effective system for political engagement. It’s not so much about left and right.”

In 2009, the Pirate Party won 7.1% of the vote and two seats in Sweden’s European Parliamentary elections. After this initial success, Pirate Parties International was formally founded in Brussels. Today it has members in over 40 countries around the world.

Pirate was the obvious choice for me because I didn’t want these dinosaurs to have my support.

The party’s great strength is in Europe and in 2014, the European Pirate party group was founded. Today this pan-European party has members from seventeen European nations including Germany, France, and Spain. The Pirate Party in Iceland enjoyed significant success in 2016, winning 15% of the vote at national level. But it is the Czech Pirate Party, founded in 2009, that is now one of the strongest in Europe, with three MEPs including Gregorová.

A leader of the Czech Pirate Party, Gregorová cites dissatisfaction with established Czech politics as a key to her party’s rise to prominence in the 2017 national election. “Pirate was the obvious choice for me because I didn’t want these dinosaurs to have my support.”

The highly conservative nature of mainstream Czech parties drew younger voters to the future-oriented, technology-focused Pirate Party. The only liberal progressive party in the political landscape, it now follows the broader political program of the European Pirates established via the Prague Declaration in 2012.

“Politics doesn’t have to look like it looked fifty years ago,” says Gregorová. Admitting that when she first started as a member of the European parliament, she felt limited and a little intimidated by all the rules and protocols. But in time she realized that none of those were set in stone. “It really freed me and now I don’t listen to anyone who tries to put me off, I just do it and it usually works! “

Gregorová’s focus is on disinformation, cyberthreats, and surveillance. She recently led a mission to Taiwan, traveling with six other MEPs to learn from disinformation experts.  She is eager to set up a specialized hub of expertise in Taipei, a leader in the fight against disinformation, designed to pool knowledge in this area and strengthen cooperation between the EU, Taiwan, and other partners. “Our relations with democratic Taiwan deserve to be reconsidered and built independently of China.”

Most people are not for the borders themselves, they are for their culture, their language, their humanity.

A stronger, more consolidated approach to EU foreign policy, particularly when it comes to human rights, is something that Gregorová would like to see in the future. She supports the idea of a European federation of regions and rails against the preoccupation with national identity which she believes interferes with more effective pan-European action. “Overcoming the borders in one’s head” is the real challenge for this young change driver. But she is positive about the future: “Most people are not for the borders themselves, they are for their culture, their language, their humanity.” For Gregorová the two are not mutually exclusive.

To this end, she points to the importance of role models for younger generations. “You can’t be what you can’t see.” She feels the weight of this responsibility as a young politician and believes that bringing politics to younger people via social media is an important part of her work. Earlier this year she launched a #TruthHurts campaign designed to raise awareness of disinformation in her home country. The campaign culminated with a deepfake video of Czech Prime Minister, Andrej Babiš, warning citizens about disinformation. Over a million people viewed the video.

For this Pirate MEP, the idea of politics as a normal part of everyday life is key. She is particularly aware of this in her own country where years of one-party rule meant that “politics was seen as something stained and dirty.” As a result, many young Czechs are “afraid to burden their CV with political involvement.”

Gregorová urges parents to encourage their children to vote and become active in the political system. She wants to see more people in general getting involved in politics. “Many people think that politics is not for them, but it is!”