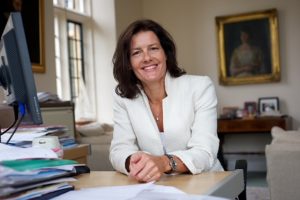 Can governments ever seriously compete with the likes of Apple and Google for the very best talent they need to meet the challenges of today and an increasingly challenging world? Ngaire Woods believes they already do.

“What I see is that some of the smartest, most purposeful people now want to go into government,” says the dean of Oxford University’s Blavatnik School of Governance, “and I know the deans of some of the world’s top business schools are saying the same.

“One third or more of their MBA students want to go into government. What’s exciting is to see people who’ve had extraordinarily successful careers and trajectories in the private sector wanting to work in the public sector for reasons of value and mission.”

Woods, the Blavatnik School’s professor of global economic governance, sits at a good vantage point to judge. Having come to Oxford from Auckland University, she has spent her entire career in academia, progressing from being a New Zealand Rhodes Scholar at Balliol College to a junior fellowship at New College and teaching at Harvard University before moving back to Oxford at University College.

Accepting 120 Master of Public Policy students and five doctoral students each year and hosting speakers from Kofi Annan to Julia Gillard to Malala Yousafzai, the Blavatnik School claims to be continuing an Oxford University governance heritage that has produced nearly 60 heads of state and government.

We have to give the same importance to the kind of training and aspiration of public servants that we give to others.

Its students typically represent between 50-70 nations in any one year and its mission statement proclaims a vision of a world “better led, served, and governed”.

A Need for Rebranding

Does public service need a rebranding to be able to compete with the private sector? Woods thinks some repositioning is required. “We need to give proper respect and status to those who are in public service,” she says.

“It starts with understanding just how difficult their role is. The trade-offs in public service are just hugely more difficult than those in the private sector.

“With every bridge, school, or hospital you build, you’re making a choice to deploy scarce resources in one place and not another. Every decision you make in public service has that agonizing trade-off and you’re much more exposed.”

There’s not a community in the world that I’ve encountered that doesn’t yearn to be better governed.

She also believes more needs to be done to help talented people move in and out of government. “Most civil services are not very good at lateral hires,” she says. “There’s an issue worldwide around recruiting and hiring into public service.

“We also have to give the same importance to the kind of training and aspiration of public servants that we give to others. A lot of my time is spent raising money for scholarships so that we can make sure we’re attracting the very, very best and making it possible for them to go from here straight into making a difference in public service without debt at the end.”

Blavatnik, she says, is one of very few high education schools in the world where 85% of students are on some sort of scholarship.

A Change in Attitudes 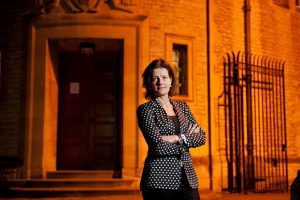 Woods believes interest in governance has experienced a revival since the global financial crisis of 2008, following “three decades of people downgrading and dissing government”.

“I remember being at Davos in a session with three very prominent CEOs who all spent the hour dissing how hopeless and useless government was,” she recalls. “I said: ‘If somebody did that to your company, how would it affect your chances of attracting great talent?’”

She feels there’s a growing consensus that even the most thriving private enterprises cannot solve problems requiring collective action, such as providing healthcare and regulatory systems that counter market failures, safeguarding the rule of law and allowing citizens to forge enterprises, interact, and contract with one another and live in safety and prosperity.

“You see this most sharply now with technology, with governments trying to outsource everything and buy in what they need because they have no in-house technical expertise,” she says.

“The governments that have done really well on digitizing, for instance, are those that have really invested in their in-house capability. Governments need huge amounts of help with deploying and regulating technology and dealing with cybersecurity. I don’t think any government in the world has got those sorted.”

A Need to Collaborate

Woods feels government also needs an influx of talent to be able to collaborate better. “Silicon Valley CEOs say that’s what they need most in their organizations,” she says, “and it’s also what we need at individual, institutional, and global levels of government.

“It’s crucial to teach people how to do that at each of the levels, whereas classic, economics-based education in public policy just teaches people to identify their own interests.

In Britain, while she sees the rollout of vaccinations as an excellent example of cross-institutional collaboration, she says the Test and Trace program was the exact opposite.

The governments that have done really well on digitizing, for instance, are those that have really invested in their in-house capability.

“Instead of operating with a collaborative model that buys from existing institutions, the first instinct was to try to outsource and do something completely separate,”

She remains confident, however that public sector leadership will develop to meet the need for better governance. “There’s not a community in the world that I’ve encountered that doesn’t yearn to be better governed,” she says.

“People want governments that give communities security and a voice in what’s happening to them. They want a chance to cohere as a society and to feel they have opportunities and can co-exist with everybody else without fear. These are things every community in the world wants. I’ve not yet found one in which government couldn’t do better on them.”