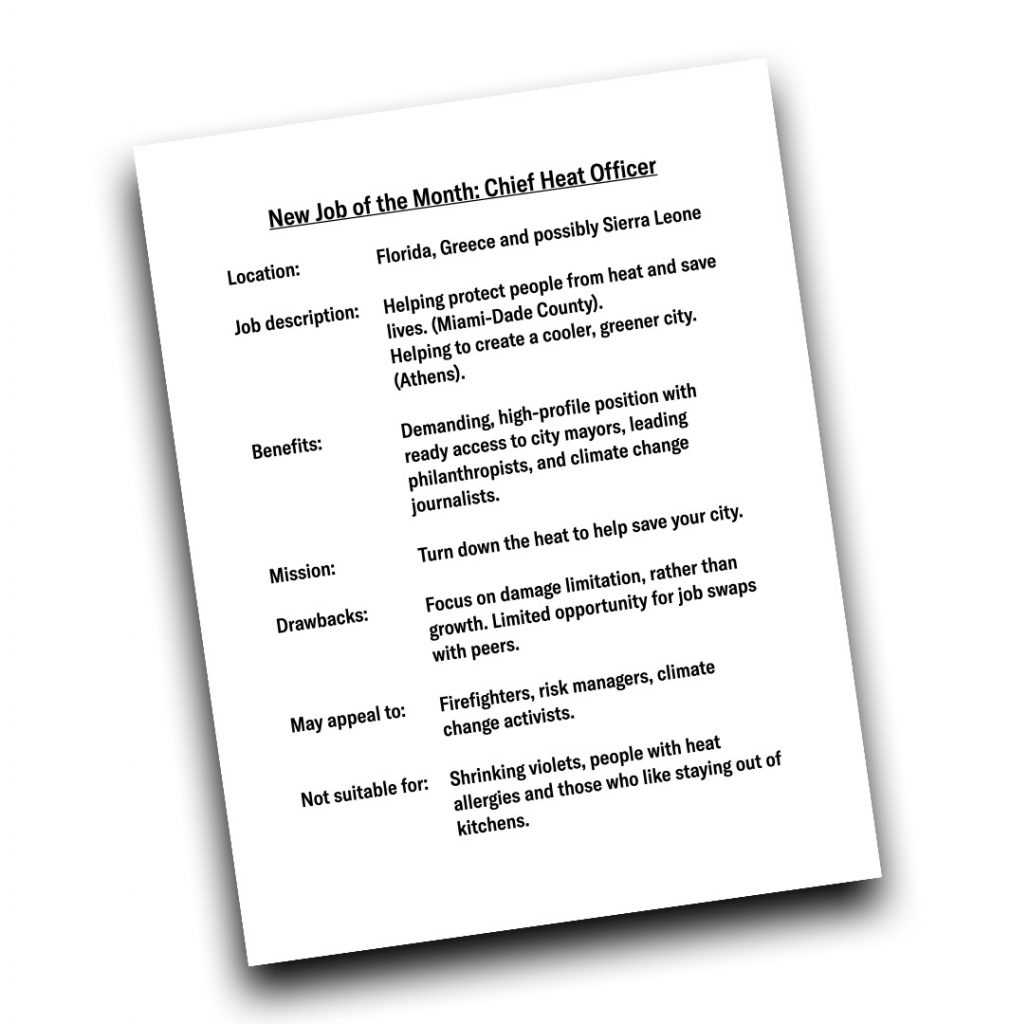 Fancy a job in a hot seat? They don’t come much hotter than the new positions just created in Miami-Dade County, Florida and Athens, Greece.

The role of chief heat officer has emerged as part of cities’ armory against the threat of rising temperatures, which is coming out from under the umbrella of climate change to take center stage and prompt urban cooling programs.

In Florida, Jane Gilbert has been tasked with helping expand, accelerate and co-ordinate efforts to protect people from heat and save lives. “We’re known internationally for our risks from sea-level rise and flooding,” Gilbert, appointed Miami’s first Chief Resilience Officer in 2016 before being named Chief Heat Officer earlier this year, told The Financial Times. “I’ve been in Miami for 26 years. I feel the change. How many more high-heat days do we have?”

We’ve been talking about global warming for decades, but we haven’t talked much about heat.

In Athens, Eleni Myrivili’s career path has seen her progress from Athens’ deputy mayor for urban nature and climate resilience to advising the city on resilience and sustainability.

Her new priority is to find ways to cool the city beyond conventional air conditioning in buildings, which adds to the climate crisis through its huge appetite for energy.

“We’ve been talking about global warming for decades, but we haven’t talked much about heat,” she told The Guardian recently. Her remit includes planting trees and vegetation, cultivating green spaces for shade and providing “cool routes” through densely-populated areas.

It is not a coincidence that Miami-Dade and Athens are using the same language. Both are members of Champions for Heat Action (CCHA), a cornerstone initiative of the Extreme Heat Resilience Alliance, spearheaded by the Atlantic Council’s Adrienne Arsht-Rockefeller Foundation Resilience Center, a global team committed to providing one billion people with resilience solutions by 2030. 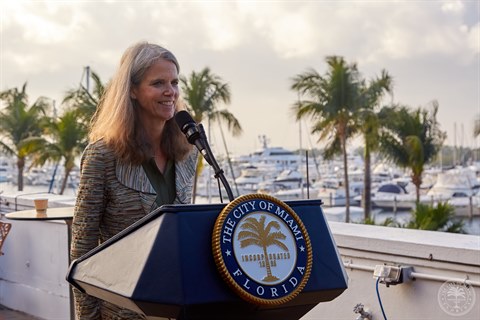 Photo of Jane Gilbert, Chief Heat Officer in Miami, Florida
Last year was the equal hottest year on record, matching the mark on thermometers set in 2016, with temperatures of a record 38°C inside the Arctic Circle and raging wildfires in Australia and California.

The World Health Organization says more than 166,000 people globally died as a result of heatwaves between 1998-2017. According to the United States’ National Weather Service, heat now kills more people each year than any other weather-related event.

Not surprisingly, in view of these statistics, other vulnerable cities are planning to make similar appointments. Freetown, Sierra Leone, may be next, while Glasgow, Paris, Rotterdam, Seville, Los Angeles, Kansas City and Milwaukee are watching with interest.

The initiatives will need support and funding if they are to be more than crowd-pleasing stunts. Miami-Dade is partnering with Athens to share intelligence about how to prepare for and respond to extreme heat and studying the impact of extreme heat on poorer communities, particularly those with Black and Hispanic populations.

As we embark on the dual tracks of prevention and mitigation, two things need to happen. People who already have jobs need new skills. And new roles need to be created.

Gilbert has set a target of increasing tree canopy coverage from 20% to 30% and updating the county’s guidelines for “cool and green” roofs and pavements.

In Athens, where the “Resilience Strategy for 2030” places special focus on heat adaptation, Myrivili will co-ordinate efforts to redesign roads and buildings and use different building materials.

The city already utilizes the Extrema Global smartphone app to provide personalized information to residents and visitors about heat-health risks. Paris, Rotterdam, Milan, and Mallorca have also adopted the app. 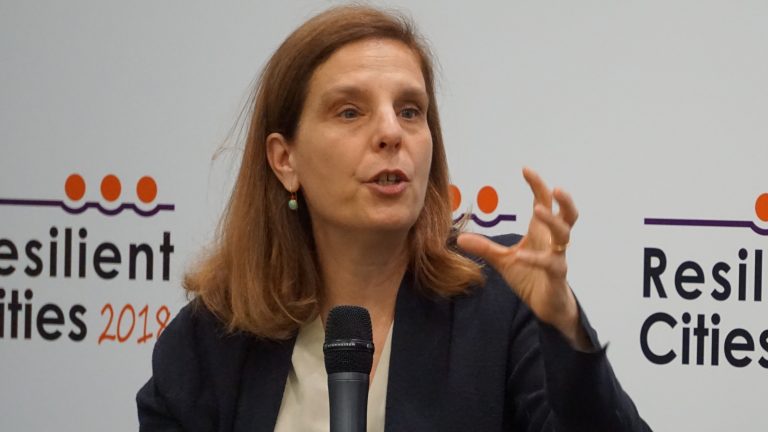 Photo of Eleni Myrivili, Chief Heat Officer in Athens, Greece.
The new title of Chief Heat Officer is part of a “green” job creation wave fostered by booming interest in environmental and corporate social governance (ESG). In June, accountancy and advisory group PricewaterhouseCoopers announced that it is to hire 100,000 ESG experts to help clients deal with emerging issues.

“People still don’t seem to understand the extent of the impact that climate change is going to have on our lives,” says Becky Willan, co-founder and chief executive of Given, a consultancy focusing on advising purpose-driven brands.

“As we embark on the dual tracks of prevention and mitigation, two things need to happen. People who already have jobs need new skills. And new roles need to be created.

“What if every CEO saw themselves as a climate activist, with the knowledge to drive change from the top? What if every marketer considered sustainable consumption part of BAU? There’s no doubt we’d have a better chance of keeping global warming to a 1.5°C limit.”

It won’t be plain sailing for the new job incumbents or the planet and Willan says another problem in the short-term at least will be finding suitably qualified people to take up the new positions.

“With more new roles created, new challenges and opportunities will emerge,” she says. “This is true in business and government. We can expect to see more jobs created around specific issues, but the real challenge is going to be finding skilled people to help address threats and realities that haven’t been part of our lives to this point. The big question is: where are all of these people going to come from?”