Michelle Maher Teaches Rural Irish Women How to Get Elected

Women are underrepresented in European politics, with their numbers sitting at around 30%, according to a 2019 report from the European Institute for Gender Equality. In the last decade there has been slight improvement. The number of female mayors has edged up from 11% to 15% and the percentage of women in national parliaments has moved from 22% to 29%. Yet, progress is slow. 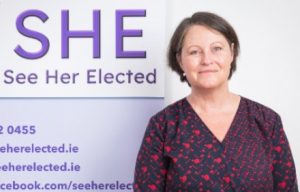 Nowhere is this more obvious than in rural Northwest Ireland, where the percentage of women in local government falls below 15%. As leader of See Her Elected Project (SHE Project), Dr. Michelle Maher, explains, “If you’re looking for women in politics, you’re not finding them in our parliaments, you’re not finding them in our councils, but you will find them on every single parent committee at schools, in sports clubs, and fundraising.”

The SHE Project started in 2019 and is a local initiative, funded by Ireland’s Department of Housing, Heritage & Local Government. A collaboration between the Women’s Manifesto Project and 50:50 North West, it aims to empower women in rural constituencies to engage in electoral politics.

The idea is simple. Provide women with the necessary information and basic skills via “SHE school”, so those who wish to can prepare to campaign in elections for County Councilors in the next local government elections in 2024.

Women can be subtly or overtly silenced in [political] spaces.

The SHE Project recently won one of the 2021’s Innovation in Politics Awards, and discussions are currently underway with the EU Commissioner for Democracy and Demography, Dubravka Šuica, about the possibility of expanding  the program to other rural areas in Europe.

SHE school starts with a discussion of the concept of active citizenship. This term is frequently bandied about, but what does it really mean? For Maher, active citizenship means putting a value on all the community work women in rural Ireland do, often voluntarily. “Women are in fact very active citizens but seldom make the step into more formal politics.”

Maher wants to change this. Research, both formal and anecdotal, suggests that it is a lack of confidence, first and foremost, that holds women back. Many women, explains Maher, still view politics as largely a male terrain and feel their own lack of knowledge in the area disqualifies them from becoming more formally involved.

I’m not happy that the work we do is unremunerated because we do just as much, if not more than the county councilors. 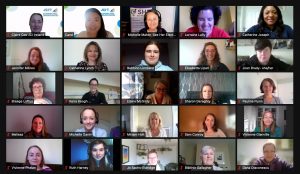 They also have very few role models as the vast majority of incumbent county councilors are men. If you don’t come from a political family or you are new to the country, it can be difficult to know where to start in politics, explains Maher. Beginning by demystifying politics, SHE school provides women with a free foundation course that consists of three one-and-a-half-hour online classes. Even if a woman chooses not to run or be involved in a candidate’s campaign, she can use the knowledge she gains from the classes to make effective and positive changes in her community.

SHE has recently published a guidebook which provides step-by-step advice on how to prepare for and run in the 2024 local elections. Along with the book, SHE started offering complementary workshops in November that are designed to reinforce the written advice. 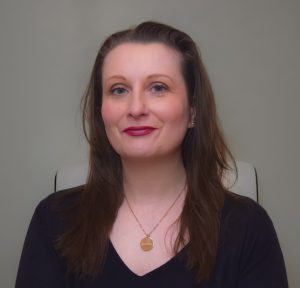 Currently, they are working with 80 women each month. One of these women is Francesca Pawelczyk, 46, who is heavily involved in the Public Participation Networks (PPN) and is considering running in the 2024 elections. “A lot of work women do is voluntary, they don’t realize how important this work is, that what they’re doing is a political act, they’re taking care of people.”

The PPNs are a relatively new initiative, designed to give more formal standing to much of the voluntary work and other forms of active citizenship people provide to local authorities. Perhaps unsurprisingly, they are largely populated by women. Thus, they also provide a way for many women to see how local politics works without having to put themselves forward for election.

However, these networks are also non-political. They are designed this way to ensure the neutrality of the community committees that comprise them. Therefore, if a woman decides to run in her local county elections, she must give up her work with her PPN and she cannot rejoin her network for at least one year, regardless of whether she wins or loses. However, this also means that what might have been a natural pipeline for community-active women to make the move into local government, is impeded.

“I’m not happy that the work we do is unremunerated because we do just as much, if not more than the county councilors.” says Pawelczyk. This local government role is part-time and might suit many women with children well.

“Women can be subtly or overtly silenced in [political] spaces.” For example, a lack of women in politics in Ireland means that maternity leave for politicians is only now being discussed for the first time.

A self-proclaimed feminist, Maher would like to see more balance and diversity in Irish politics generally. This includes more representatives from minority groups, including the Traveller communities and the disabled. Nevertheless, she is hopeful and expects at least 20 of the 80 women currently enrolled in SHE school to “give it a really good shot” in 2024.

SHE school is currently recruiting their second class of students. “I think change is happening and I think we’re driving that in rural Ireland.”