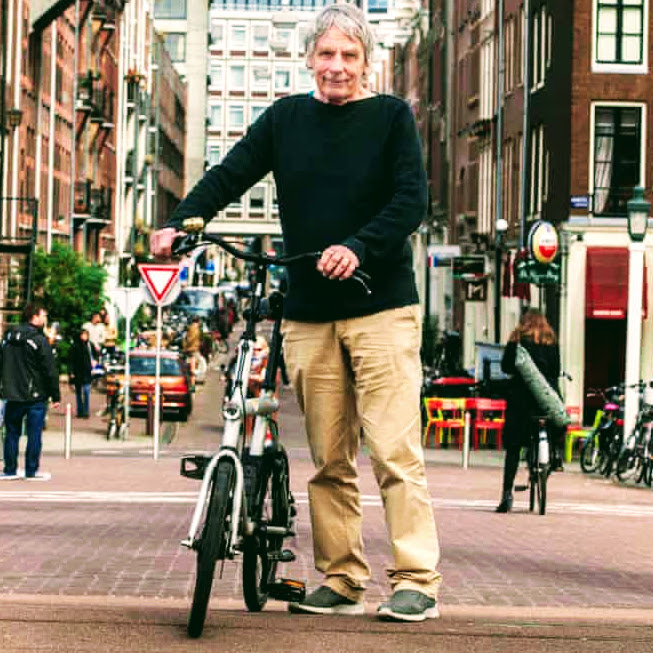 As an icon of the revolutionary spirit of the 1960s, the famous picture of Che Guevara in a beret has proved remarkably durable. Less familiar today, though created around the same time by the vanguard of what is now a micro-mobility revolution, is the iconic white bicycle.

In 1965, Luud Schimmelpennink, a Dutch industrial designer and member of Amsterdam’s anarchist Provo movement, declared war on the car, inner city congestion and pollution, as well as the brutalist urban planning policies associated with them. With a few Provo members, he painted 50-or-so bikes white and scattered them across town, there for the taking, using and dropping.

In avid cycling circles, Schimmelpennick is an urban legend, regarded as a savior for successfully blending the practical and political as he has combatted a seemingly inevitable decline in cycling.

This ignited an early version of today’s ‘reclaim the streets’ movements, branding bikes as shared public goods. White Bikes symbolized revolution, reflected famously in photos of John Lennon and Yoko Ono near the bikes during their honeymoon.

Over the years, these bikes eventually rusted away, residents adopted them or they otherwise disappeared. Yet the bike-sharing idea continued to spread, with Schimmelpennink amongst its greatest champions. Later, as a member of Amsterdam’s City Council, he campaigned unsuccessfully for a fleet of 300 city-provided free bikes, but fared better in helping secure a ban on non-resident parking in the city center.

In avid cycling circles, Schimmelpennink is an urban legend, regarded as a savior for successfully blending the practical and political as he has combatted a seemingly inevitable decline in cycling. In his hometown of Amsterdam, the white bikes were launched in the middle of a 40% fall in daily trips by bike from 1960 to 1973. Over the years, he has piloted and prototyped many shared-mobility concepts that were later borrowed, often without credit and with little financial recompense (though his longtime enthusiasm for open-sourced design suggests he was not much driven by getting paid). That has been most true of successful bike sharing programs such as Paris’s Velib. 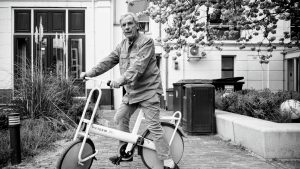 At the same time as the white bikes appeared on Amsterdam’s streets, Schimmelpennink was trying to figure out how to solve the short-haul transit problem in a fossil fuel-free way.  Climate change was not yet on the agenda, but air pollution was, so he sought cleaner ways to both cover long distances and keep bikes moving in increasingly car-clogged Amsterdam. His solution was Witkar (“white car”) the first-recorded experiment in electric vehicle sharing. He began this experiment with four two-seater smart-car-sized vehicles with polyester ‘skins’, based at five charging stations and released by inserting coins.

Officially launched in 1976, the social, operational and technical integration aspects of the Witkar were also ahead of their time.  Schimmelpennink tapped crowdfunding to build his system. He set up memberships along similar lines to ZipCar today and automated registries using punch card technology, which replaced the coin-release system. Remarkably modern smart-card-like ‘swipe and go’ registration and payment technology linked the user and his or her details to their bank using analog telephones to transfer money from a bank’s electronic system and unlock the ignition. Detection technology also helped would-be users track the availability of electric vehicles. 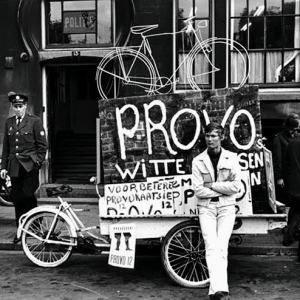 Later Schimmelpennink developed several other bike projects, connecting short-distance cycle use to railway stations for longer journeys. Although ultimately these were not implemented, many aspects of his White Bike ‘DEPO’ system have since been borrowed by mobility programs elsewhere. Bikes were built heavy and automatically locked if not returned, to deter theft – functionality used today by many e-scooters. Other chipcard services included digitized payment (with the identification of the user and tracking systems for bike location and traffic flow), in a partnership with the Amsterdam Transit Agency, Postbank, Dutch Telecom and Chipper Netherlands.

In the late 1990s, with government funds and support from the Dutch Cycling Association, the Dutch Rail System fused elements of DEPO bikes into a station-based system now called OV-fiets. These bike fleets made it easier for travelers to ride out from train-station “hubs”. Today, over 20,000 of these shared bikes at 300 rail stations are used for over 5 million rides a year.

Like Schimmelpennink’s White Bikes, by 1986 his electronic vehicle sharing scheme was discontinued – not least because there were too few charging stations, which limited journey range. But from 1999 onwards, bike-sharing schemes started to catch on across Europe, all learning important lessons from Schimmelpennink’s pioneering work. In France, cities such as Rennes, Lyons, La Rochelle and Paris, built large scale bike sharing with government financial backing and corporate sponsorships.

Now 85, the activist-entrepreneur, now head of sustainable mobility firm YTech Innovation Centre, continues to plot the next phase of the micro-mobility revolution with a 2.0 version of the Witkar. And he is still cycling.