Jill Pay broke through a glass ceiling when she became Britain’s first female Serjeant at Arms of the House of Commons in the position’s 607-year-history. “All but one of my predecessors in the role were ex-military and the other one was a former diplomat,” she says. “The final two candidates were me and a former brigadier. They had to decide whether they wanted something new or more of what they’d had for six centuries.” 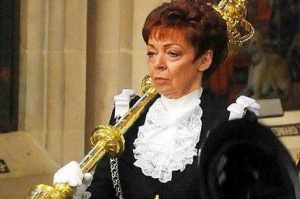 Now Pay chairs The Gender Index, a not-for-profit organization committed to achieving “positive change for women, driven by data”. As a woman whose career has zigzagged across public and private sectors, she is a relentless champion of the need to establish metrics to standardize such progression.

In her four years as Serjeant at Arms, she was at the heart of British pageantry and tradition, also bearing ultimate responsibility to the House of Commons’ Speaker for all access and security. “A lot of people see the uniform and think it’s just about carrying the mace,” she says. “But 80% of my responsibility was for security, which was a huge burden. I was ultimately in charge of security for all the 3,500 people working on the parliamentary estate and the million visitors each year, responsible for the security of the building and the perimeter. Our contingency planning involved a lot of different attack scenarios.” Five years after Pay left the role in 2012, four people were killed and more than 50 injured in a major terrorist attack outside the Palace of Westminster.

I felt very much that I was doing it for the senior women in parliament. I was a role model. If I could do it, they could do it.

Pay began her career in the private sector, working in business management in advertising and private health before taking on projects at the Department for Employment and in education. She arrived at the Commons in 1994 as head office keeper, responsible for all front-of-house services to MPs and their staff, and then spent seven years as accommodation rationalization manager, preparing The Treasury’s new home at Portcullis House, just around the corner from Big Ben. She spent three years as executive officer to the Serjeant at Arms and another three years as his assistant, before taking on the historic role herself in 2008.

“I very much saw myself as bringing to the role a mixture of public and private sector experience that it had never had before,” she says. The Serjeant at Arms position has continued to push boundaries, with a former postman appointed to succeed Pay. British-Moroccan civil servant Kamal-El-Hajji followed in 2016 and in 2019 Nigerian-born Ugbana Oyet became the first black person to hold the post. 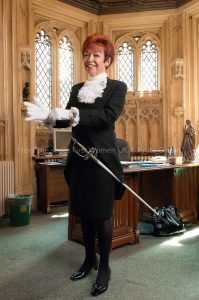 At The Gender Index, Pay has found different challenges and opportunities as she presides over an organization offering real-time data on job opportunities at 4.5m companies across Britain. Its statistics can be sliced by geographical area, sector, type of investment, growth, and company age. The index shows that only 16.8% of active UK companies are currently led by women – something that Pay is committed to changing.

“The index is not a one-off study. It’s an on-going survey,” she says. “We’re committed to getting that figure up.” The index also shows that less than 1% of venture capital and private equity investment in the UK goes into women-owned businesses. There’s a huge opportunity for these industries to recognize that, actually, women-owned businesses sustain longer than male-owned ones,” says Pay. “There’s an interface there that’s not working. There’s a great opportunity to change the situation.”

They had to decide whether they wanted something new or more of what they’d had for six centuries.

Despite her current role and her history as a mold-breaker, Pay doesn’t want to be seen as an individual standard-bearer, highlighting the team-based nature of many top public sector roles. “When you’re the first woman to do something, whether it’s being the first woman in a family to go to university, row the Atlantic, be a leading lawyer, or become Serjeant at Arms, you need a team behind you giving you support. I always felt that I had huge support from both Peers and MPs because they were very aware that it had always been a male-dominated role.

“I felt very much that I was doing it for the senior women in parliament. I was a role model. If I could do it, they could do it. For women entrepreneurs starting their businesses, they often find it very lonely, and I think they need that support and rock behind them as well. I want to be that for them.”

Pay doesn’t know whether the public sector has much to teach its private sector counterpart about female advancement, however. “I remember when Tony Blair became Prime Minister and there was a lot of attention on the ‘Blair babes’. But if you look at how many of those actually stood again at the following general election, the numbers dropped hugely. So, I’m not convinced that the public sector is ahead of the private sector in that regard.”

I very much saw myself as bringing to the role a mixture of public and private sector experience that it had never had before.

While tradition and the lack of precedent have held back women back in Britain’s public sector, Pay says the biggest issue in its private counterpart is access to finance. “That’s the biggest challenge,” she says. “Then there are women’s caring responsibilities, a need for more support hubs and local mentoring. If you’re a woman in Norfolk, you’re not that interested in hearing about the real high-flyers. You’re interested in hearing about a woman who went to the same school as you and has set up a business and grown it. You want to follow what they have done. The Gender Index’s stated ambition is to help create a fairer future, but a step on the way is to have a positive image for women in enterprise that’s driven by data. That’s going to help women see where the opportunities are.”

Pay believes The Gender Index can be much more than a private sector tool. “We had people from the Department for Business, Innovation and Skills at our launch and we’re going to be talking to the Treasury,” she says. “This can be rolled out right across the public and private sectors. It’s free to access for everybody from entrepreneurs and investors to national and local governments. The data that people need to progress is now available.”