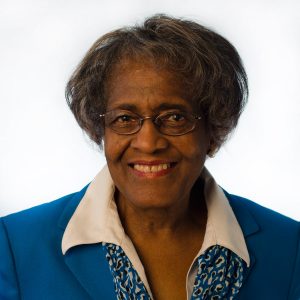 “It came from being a girl scout,” Jacky Grimshaw said, on what sparked her to pursue a career in public service, working to make life better for Chicago’s most vulnerable. “It instilled in me a sense of service, of helping others.” As a result, she notes, her career has been “eclectic”.

Grimshaw’s professional journey has followed a circuitous route, from political organizer to government employee, where she served at the city, state, and federal level at various points with a stint in media in between. Her government roles ranged from managing minority upskill programs for Illinois State to serving as the City of Chicago’s Deputy Treasurer. Today, at age 79 Grimshaw works “part-time” as Vice-President of Government Affairs at Chicago’s Center for Neighborhood Technology (CNT), a nonprofit that works to improve urban sustainability and prosperity.

This lifelong Chicago resident has also taught elementary-school and served as an aide to the first Black Mayor of Chicago, Harold Washington, winning recognition as his top legislative aide. And she has studied Public Policy “just to know that I wasn’t doing the wrong thing”.

Hers is a beautiful career with the common thread of stepping up when asked to serve those who need help most. How might one do the same in a world that needs so much — but where the doors to entry and impact in public service are so elusive?

“Do what you are good at, where you have passion, and the opportunities will find you. But beware: the cry for help might come close to home,” she cautions.

Grimshaw was first shocked into community organizing by her young daughter who noticed non-stop fire engines near their South Side of Chicago home (“Mommy, when people get old, they die; when buildings get old, they burn up”, her toddler observed). Activists were investigating rumors of arson, just as the University of Chicago was eyeing a southward expansion.

Do what you are good at, where you have passion, and the opportunities will find you.

Her shift from teaching to government happened in 1975 when the famous civil rights activist Al Raby knocked on Grimshaw’s door. After a regular drop-in beer with her husband, Raby asked if Grimshaw might consider a contractor role in Illinois State government. The task was to help boost the performance of minority entrepreneurs in a new program aimed at diversifying procurement. “He wanted these folks to perform. If they didn’t, that would be a setback,” she remembers. “How can you say no, when you know the oppression of African Americans?”

She said yes, but only if she could deliver progress before she delivered her son. “You have to be careful of your friends. They get you in trouble,” she jokes. Her son obliged, arriving weeks later than planned, allowing Grimshaw to double-down on her work.

Knowing that Grimshaw was good and that she’d step in if he pulled at her heart strings, Raby came calling again, this time on behalf of the Department of Children and Family Services (DCFS) which then had no contractual relationship with service providers. These included mental health and medical facilities and group homes that housed child wards of the state and those in protective custody. “No contract, no accountability,” she observes. “These kids needed help. How can you say no?” Grimshaw accepted.

I had the background; they had the need. So how do you say no?

Decades later, as a gifted writer and speaker, she naturally turned to political commentary at Crain’s Chicago business. That led to work for public radio station WBEZ, including the opportunity to interview Hilary Clinton just as her husband was running for President. Grimshaw followed that with a stint at ABC Radio on its ‘Beyond the Beltway with Bruce DuMont’ show on which she was a regular guest.

Grimshaw pivoted in 1992 to NGOs, once again responding to a call. This one also came from a friend, who asked if she might step into the CNT, given her knowledge of and connections to the mayor’s office, as well as to the city’s welfare and transit agencies. “I had the background; they had the need. So how do you say no?” Grimshaw asks, noting that she put off retirement there several times.

Having covered so many programs, which one was the most gratifying?

The Homemakers services program at DCFS she says, because it served such a glaring need. “It allowed single mothers to not have their kids taken away amid all the stresses and pressures,” because of the babysitting, errands-running and housework help it provided, she recalls. Without that support, she said, the challenge of making rent might set off an avalanche of much larger medical and social problems. “The children were better off.” 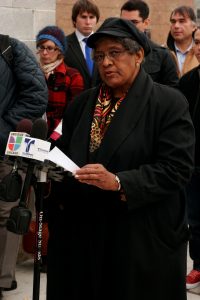 Some 30 years after Grimshaw left government, Chicago’s politics and cityscape have changed. COVID-19 has also laid bare what badly needs fixing, she observes, helping generate much-needed attention and resources. “Our mayor has created a lot of opportunities for people to solve problems,” she says, singling out new programs that invest in communities, climate, and economic opportunity. Still, Chicago has other big problems that need solving are mounting like those that concern police, violence, guns, and homicides, like other U.S. cities, she laments.

Based on her experience what advice does Grimshaw have for both prospective employers and today’s job seekers who are keen to give back?

To attract talented young people to government, particularly business-bound graduatess, she singles out paid internships so that they might steer their careers towards public service after enjoying its emotional rewards. A would-be banking intern Grimshaw worked with did just that and ended up pursuing city planning instead. “I shifted some from the business and for-profit sectors to nonprofit. That makes me feel good, that I had that impact,” she notes. “Public service is extremely rewarding. In spite of the challenges, we are better off because of public servants who care, who deliver, and who are committed to making a difference.”

As for those hell-bent on giving back, she suggests they start organizing, as she did. She also recommends informational interviews and brief pro-bono pivots from other sectors because today’s big employers often approve mini-sabbaticals and volunteer work that can make a world of difference.

The need has never been greater. There is great opportunity to use your skills to be of service.

“The need has never been greater. There is great opportunity to use your skills to be of service,” she says. Where does she see the greatest needs across the country? Grimshaw points to housing, as rent moratoriums end and shelters overflow, and to transportation as both city bus drivers and their trainers quit en masse for better-paid work elsewhere, leaving the transit-dependent vulnerable to job loss. These are among government’s hardest problems today.

“My work has been all about making sure that the quality of life for the people I touched was better as a result of my being there,” she reflects. “To help in some small way. That’s what motivates me: can I make a contribution?”

Why Graduates in Britain Should Consider a Government Career

Commons Governance for the Common Good in Amsterdam