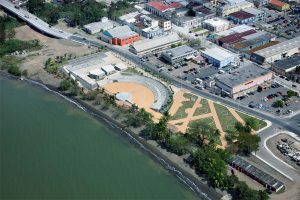 To shore up U.S. infrastructure and the health of the planet, we are only now starting to understand how the country’s massive Bipartisan Infrastructure Law (BIL), passed last November, will help curb carbon emissions. Slowly, the contours of how this more than $1 trillion package will help climate-proof roads, train tracks, ports, walkways, ecosystems, coasts, and homes in flood- and fire-prone areas, among other BIL priorities, are taking shape.

What is clear is that federal funds will not fuel a big shift to sustainability. There’s still far too much earmarked for carbon-intensive steel and concrete structures.

What may prove to be a game changer, however, are new and clearly articulated requirements that builders assess the ecological effects and benefits of all new work. Of note is the shift from a goal of “climate change prevention” to one of “resilience” — which means strengthening systems to withstand and recover from increased extreme weather. Helping boost resilience is “soft”, or plant-based, infrastructure such as forests, sea grass, marshes, and mangroves to partly, if not wholly, replace traditional steel and concrete defenses. Many consider this “green” infrastructure to be more flexible, durable, and affordable than the usual “grey” stuff. Plus, in a world increasingly valuing green recreational space, parks make us happy.

In other words, look to such vegetation to 1) lessen future near-certain climate change-wrought destruction, 2) replace “some” concrete and steel, 3) absorb the carbon we are trying to curtail, and 4) incite joy. To do this, governments need people skilled in hydrogeology, ecology, architecture, and landscape architecture.

“Structural programs have to demonstrate some climate resilience. That sets the bar higher,” explains Fraser M. Shilling, Director of the Road Ecology Center at University of California. “You have to pay attention to the environmental impacts.”

You do. The good news is that, following the world’s seven hottest years on record plus an emissions spike last year, BIL funding for resilience-related measures is up across U.S. agencies. From the Environmental Protection Agency (EPA), to the Department of Transportation (DOT), to the Federal Emergency Management Agency (FEMA), to the Fish and Wildlife Service, to the Department of the Interior, resilience is the new buzzword and priority.

Of this, $7.3 billion will be redistributed to states through a new “Promoting Resilient Operations for Transformative, Efficient, and Cost-Saving Transportation” program (PROTECT). Also noteworthy is roughly $7.5 billion from DOT’s RAISE (Rebuilding American Infrastructure Sustainably and Equitably) grants. Selection criteria include community connectivity and economic growth.

Historically, cities have suffered most from such disasters because many are in or near coastal areas. But the damage is spreading, as erratic weather hits the heartland.

That’s likely to push city leaders, many of whom are coming off a year in which they had to manage catastrophes such as destructive wildfires, torrential rainfall, factory-leveling tornadoes, and flash floods, to consider investing in green infrastructure.

Historically, cities have suffered most from such disasters because many are in or near coastal areas. But the damage is spreading, as erratic weather hits the heartland.

What could this “green infrastructure” look like? There are a number of possibilities using either a pure green approach or a “green+grey” combination, many of which proved wildly successful in pilots.

These “nature-based solutions” collectively could make a big difference in cutting our carbon by 2050:

1. Fortification against storm surges. Strong hurricanes bring significant sea level rise that can quickly swamp shores. Sea marshes and coastal forests can slow wave speed and absorb carbon. BIL earmarks $4.5 billion for ecosystem restoration work that would strengthen such barriers. It could also provide funds for buyouts that would move at-risk seafront land into conservation areas. A good chunk of the EPA’s $1.8 billion is for the restoration of coastal habitats and wetlands.

This type of green infrastructure might provide better protection for Miami than its much-debated seawall; California’s Pacifica outside San Francisco already has a seawall.

2. Torrential downpour drainage. Sudden, extreme storms can rapidly fill concrete ditches and sewers which spill over onto roadways, causing cars to hydroplane and subway stations to flood. The costs of these overflows include the erosion and destruction of key infrastructure, human casualties, harmful discharge from full sewers, and tainted drinking water.

Key stormwater management approaches that address this include “so-called” permeable pavement, a porous substance that is made when plant-based material is mixed in with the paving asphalt. Of the funds it is allotting to FEMA, BIL will funnel $1 billion into flood risk planning. Such resources might also prove useful on roads over the bayous and swamps of Louisiana, Florida, and Mississippi.

BIL could also provide funds for more roadways akin to Queens, N.Y.’s “living street”. When Hurricane Ida dumped record rain on New York City in September 2021, some streets in seafront Rockaway Beach withstood the torrent. Why? A network of roots engineered under and around the permeable pavement quickly sucked up and filtered out excess water and redirected it towards groundwater serving local homes, farms, and factories. Similar designs could be used under bike lanes, pedestrian paths, and sidewalks. Such pavement also helps strengthen soil structure.

3. Wildfire control: Clearcutting around homes in the fire-prone regions of California, the Pacific Northwest, and Colorado as well as in the bone-dry Southwest is a short-term way to prevent wildfires from spreading quickly. But felling trees comes at a price, including lost “carbon sinks” and natural barriers that prevent pest-carrying wildlife from transmitting disease to humans when fleeing their destroyed habitat.

There are several longer-term, more environmentally friendly, and perhaps more affordable alternatives. These include fortifying and tree planting on slopes and moving water catchment areas higher so that rainwater cascades into and over newly forested hillsides. This lessens the likelihood that trees will die and decreases the erosion brought on by severe droughts, which can trigger mudslides after downpours. 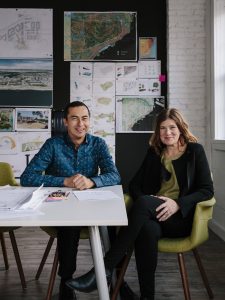 Another approach is adding livestock like goats, which selectively nibble on parched wild grasses and low-lying tree canopy on hard to reach, undulating hills. This thins the forest, preventing flames leaping from trees to homes.

Australia did this with mixed results. But its research builds on successful measures taken by California, Spain, and Portugal. Other possibilities including borrowing selective, subtle burning techniques from indigenous peoples, which Pacific Northwest states are exploring. BIL sets aside $1 billion for Community Wildfire Defense grants through the Department of Agriculture.

While BIL will not fund every “soft” and “green” project, it should help cities and others update their infrastructure to better withstand the ongoing impacts of a changing climate. For funding and work opportunities, look to the White House’s soon-to-be-released comprehensive guidebook of all available funding.

The People vs. Shell for Climate Change

Jared Walker on the Hidden Solution to Healthcare Bills