In India, an elected member of Parliament (MP) represents, on average, 2.5 million citizens. This is by far the largest political representation ratio in the world, more than three times that of the United States’ House of Representatives. Does this affect how local governments in the country work? What kind of help do Indian MPs and other elected public representatives have or require to adequately assess and address the needs of their constituents? 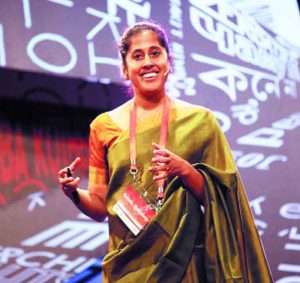 These are some of the questions that Rwitwika Bhattacharya sought to answer by founding the Swaniti Initiative. Swaniti is a consulting-style social enterprise. It works with elected government representatives in different ways to strengthen public service delivery mechanisms at the grassroots.

As a child, Bhattacharya spent several summers accompanying her politician father to meetings with government officials, receiving an insider’s view into the workings of the Indian government. After completing most of her education in the U.S., Bhattacharya, a graduate in public policy from Harvard’s John F. Kennedy School of Government, worked with the World Bank on labor market issues. But soon after, she decided to build on the learnings and interests which took root in her childhood.

While the government is huge, and has a ton of resources, there are some fundamental gaps which civil actors can come in and fulfill.

“One of the things I would hear from politicians was that they didn’t have the requisite support,” she says. She also recognized that many young people like her wanted to get involved in the governance process in India but had few avenues to do so.

So, in 2009, at the age of 22, Bhattacharya founded Swaniti, starting with a few small projects. Initially, they worked with an MP to set up computer labs in public schools in his constituency, which proved to be so rewarding and full of potential that it led to other projects.

Over the years, MPs have sought Swaniti’s support in analyzing government reports and data and in tracking development and the utilization of funds. They have also looked to Swaniti for overall expertise and assistance in serving their constituencies.

“I think we realized that not only is there a need, there’s also something that isn’t working in the public system, so you have government stakeholders looking to external partners for support,” she says. “That is essentially the model of Swaniti. While the government is huge, and has a ton of resources, there are some fundamental gaps which civil actors can come in and fulfill.”

To fill some of these gaps, in 2015, Swaniti started its flagship fellowship program called Supporting Parliamentarians on Analysis and Research in the Constituency, or SPARC. As the name suggests, the idea was to hire associates through a rigorous process who would then be assigned to an MP for a year, assisting them with ground research, mobilizing funds, and implementation of specific development needs.

SPARC fellows have worked in at least 35 constituencies spread across 15 states in India. Their projects, mainly in the rural hinterlands, have included improving infrastructure and facilities in schools, initiating mobile medical units and camps to improve access to health services, implementing government schemes for livelihood and skill training, and establishing better water and sanitation facilities.

What we need is to institutionalize the capability of the young people coming in and working because we are creating programs that are affecting them the most.

Strengthening these programs ensured improved benefits on average to at least 12,000 people in a constituency, Bhattacharya says. “Which, given the population size, is still miniscule but it kind of showed the possibility. If we were able to provide this information to other MPs, what would that be like?”

When Swaniti’s contract with its partner organizations ended in 2021, Bhattacharya decided to take that as an opportunity to redesign the SPARC program so it will have an even greater impact and be more effective when she relaunches it next year. In the meantime, she is using what she has learned from the program to start fellowships in other sectors.

The potential and the challenges

During Swaniti’s initial years, Bhattacharya remembers receiving an average of 300 applications for a single position. The interest was massive. “Whether it is the political or bureaucratic system, a lot of decision making is still with people who are not young. What we’ve seen is that the decision makers are not really the target constituents,” she says. 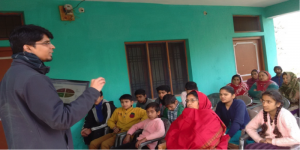 With a median age of 28, India is considered among the youngest countries in the world, and people aged 18 to 29 constitute 22% of its population. This population could be a tremendous asset to the country, Bhattacharya adds, but currently they have limited channels into the governance and policy space. “What we need is to institutionalize the capability of the young people coming in and working because we are creating programs that are affecting them the most.”

To bring in that exponential change, which a lot of young people want when they come into government, takes understanding, willingness, and cooperation from the government side. It takes a while to build that trust.

But that’s not an easy assignment. The most fundamental challenge is navigating an opaque government with systems that aren’t always clearly defined. “It is a relatively large machinery which does not talk to each other,” Bhattacharya says. You could have a forest department and an agriculture department, both working on regenerative development, for instance, but with no information about what the other is doing. To work with and within such a machinery is to first get departments to share information and be aligned on their missions, which is a massive task, she adds.

“To bring in that exponential change, which a lot of young people want when they come into government – they want to transform the way systems are working – that takes understanding, willingness, and cooperation from the government side. It takes a while to build that trust.” 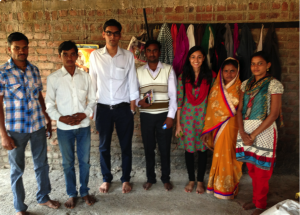 Currently, Bhattachrya is focused on a new Swaniti fellowship offering climate initiatives in India. In her meetings with government officials, she has seen their willingness to set up green councils, work on environment restoration, and create alternatives to India’s coal-based economy. She is also finding interest in a new Clean Air program that would work on addressing India’s air quality problem. Young professionals are already being hired to work on these issues.

It has rekindled her faith in the importance of the work they do. “What I realize is that the exponential change which a lot of us are excited about is very much possible.”

Over the next few years, Bhattacharya wants to respond more systematically to all the requests for support that they receive from governments. In some constituencies, consistent work has helped create a culture of bottom-up planning such that village administrations now take regular community feedback to ensure government programs are working effectively for them. This is the kind of long-term impact they want to replicate.

“So tomorrow if there is no longer a Swaniti, how does the government create the institution to continue to hire talented professionals, how to ensure that they have the right research and technology,” she says. “A lot of what we are hoping to do now is to establish those systems.”