How Gen Z in Government are Shaping Action on Net Zero 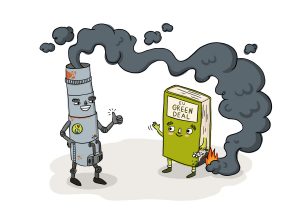 Climate change is one of the defining issues of our age and Gen Z is all too aware of the challenges posed by rising carbon emissions. Whether through adapting their lifestyle choices to supporting green political movements and engaging in climate-related protests, young people are currently at the vanguard of calling for action to tackle global warming.

If they really want to make change, though, my generation should not limit its ambitions to campaigning for net zero, they can pursue careers that will give them an opportunity to deliver on net zero. There are entire teams in government departments working on policy solutions to the climate crisis and they need Gen Z to make their voices heard and to have a seat at the table so they can ensure a net zero agenda is at the heart of government policy.

One of those people who already has a seat is Klaidas Kazak, a 24-year-old policy advisor working in the UK government on carbon emission trading. Klaidas joined the Emission Trading Scheme (ETS) policy team in the Department for Business, Energy, and Industrial Strategy at the start of the year and has already assumed real responsibility, working on the monitoring, reporting, and verification of UK carbon emissions. 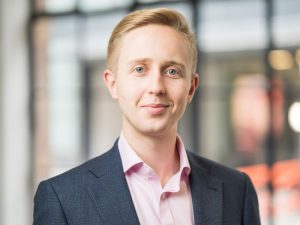 When I ask Klaidas to explain ETS, he boils it down to a cap-and-trade system. This means the system sets a cap for the amount of carbon emissions that can be emitted by a participant in the ETS in a year. The trade aspect is about participants making allowances to compensate for their emission. In short, Klaidas describes ETS as an attempt “to solve climate change through market mechanisms” with participants sacrificing credits based on the amount of carbon they emit.

While net zero has come to the forefront of political debate in recent years, Klaidas is quick to remind me of the history of ETS in the UK, which was first introduced in 2005 as part of the EU scheme. The UK’s current ETS is modeled on its EU equivalent, although Klaidas and his team are looking at expanding the scope of the UK ETS and are publishing a public consultation to explore this further.

The private sector cannot have as much impact on net zero as the government … “If you establish a hierarchy of influence, government will always be on top.”

I was curious about what Klaidas actually does in his position. He explained that he is responsible for widening the scope of ETS by lowering the threshold for participation in the scheme. Currently about one third of industrial emissions are not traded, which is the equivalent of approximately 56 megatons of carbon dioxide. The government wants to bring that number down and Klaidas is playing his part. For instance, he is gathering evidence and working with expert organizations to ascertain whether the threshold for participation in the ETS can be lowered for companies. Currently, manufacturing plants with power generators that have levels of energy consumption above a certain amount fall into scope of the ETS. Lowering that threshold may present an opportunity to include smaller manufacturers and thereby expand the number of ETS participants.

There is no silver bullet that will solve the challenge of climate change. Government officials are working on various policy solutions aimed at reducing carbon emissions, from delivering an electric vehicle strategy to investing in renewable energy sources.

Carbon markets are relatively new and in a state of constant change. Coupled with the influence of external events on carbon trading, this creates a fast-paced environment.

I am curious as to why Klaidas felt drawn to working on the ETS when there are other opportunities to address the climate crisis in government. He responded that he wants to be making the greatest impact on helping the UK achieve net zero and believes “ETS is the main policy driving decarbonization”, ahead of other measures including the electrification of vehicles and the use of carbon offsetting.

Alongside the opportunity to make a decisive contribution to reducing UK carbon emissions, Klaidas was drawn to the innovative nature of the work as carbon markets are relatively new and in a state of constant change. Coupled with the influence of external events on carbon trading, this creates a fast-paced environment that bodes well for those looking to “constantly learn something new”.

The recent war in Ukraine illustrates the ever-changing nature of his work. To avoid paying for gas, industry is burning more coal as it is a cheaper alternative source of energy. This leads, in turn, to rising emissions and so demand for carbon credits among ETS participants increases driving up the cost of the credits. 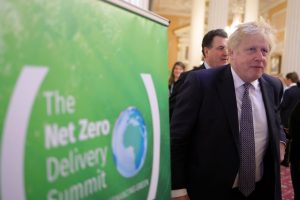 As someone who used to work in the private sector, Klaidas is adamant that working in government is the most effective way for young people to deliver meaningful change on climate policy. “Influencing policy [from the outside] and shaping policy at the heart of government are two completely different ball games,” a point Klaidas makes convincingly when he cites his work in drafting legislation to help the UK reach net zero just two months into his role.

There are numerous actors with loud voices when it comes to the net zero agenda, including think tanks, NGOs, and businesses. Klaidas believes that the private sector cannot have as much impact on net zero as the government as you can only directly influence policy if you are in the government: “If you establish a hierarchy of influence, government will always be on top.”

My interview with Klaidas leaves me more convinced that there is a place in the heart of the UK government for young people who want to have a genuine impact and work on innovative solutions to the climate crisis.

Influencing policy [from the outside] and shaping policy at the heart of government are two completely different ball games.

My final question to the young policy advisor is how other Gen Z’s can successfully pursue the same career path. Klaidas says the government’s door is always open. Technical expertise is not a prerequisite to working on net zero in government. Instead, government is looking for people from a range of backgrounds and experiences who have transferable skills that can be applied to the behaviors the government looks for, such as the ability to work effectively in a team and the effective use of evidence to inform decision-making.

Let this be a call to action to young people who care about tackling climate change; you can play your part at the heart of government.