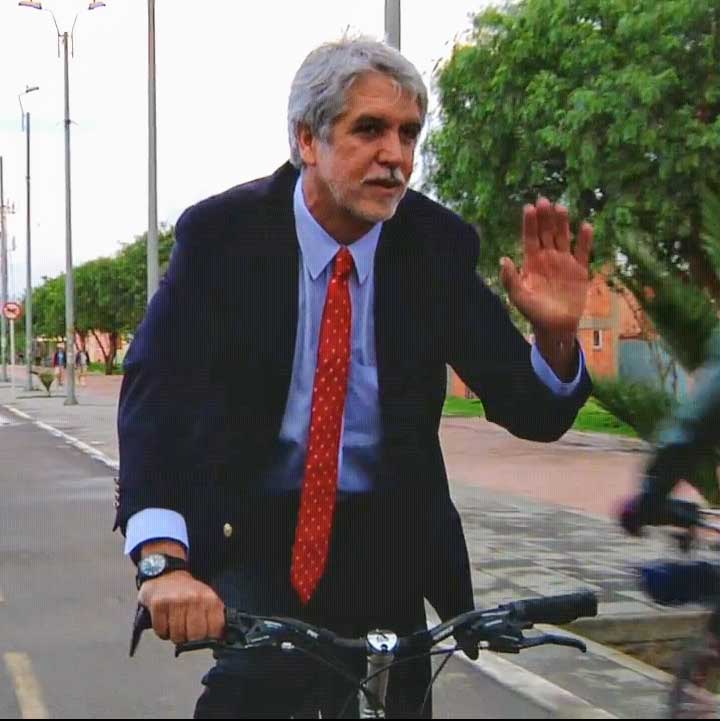 Bogotá, the capital city of Colombia, was a pioneer of micromobility long before anyone called it that. In the 1970s it launched “Ciclovía”, closing streets on Sunday to encourage cycling, which was just the beginning. Later, over his two terms as mayor, Enrique Peñalosa put micromobility-to-mass transit at the heart of broader strategies for improving the quality of life in the city – an effort continued by his successor, Claudia López Hernández, herself an avid cyclist. When Driving Change spoke with him recently, before exploring the future of micromobility we began by asking him about the early days of popularizing biking in Bogotá.

Enrique Peñalosa (EP): Bogotá has a long tradition of closed streets on Sunday for cyclists. We increased this to about 120 kilometers, with around 2 million cyclists every Sunday.

Outside the Netherlands, Denmark and Sweden, and some German cities, we were among the earliest to create protected bikeways and bicycle highways, about 20 years ago. We went from under 1% of the population using bikes to 7% in 2019, in a city with about eight million inhabitants.

Bogotá is one of the densest cities in the world with about 230 inhabitants per hectare. Tens of thousands of people use our bicycle highways inside the city to get to work. But we don’t have much space. So, we created bicycle highways on the city’s border, knowing that the city would grow beyond it.

We built protected bicycle ways along creeks when it was not cool to ride bicycles, when there were no bikers in Paris or New York or Madrid or Barcelona. Zero. But now everywhere, bicycling is sexy.

Then, it was important to not just protect the cyclist, but to increase his or her social status. Because those who rode bikes then were the poorest of the poor, they felt almost ashamed, like they were a nuisance to cars. Protected bikeways showed that a bicyclist on a $50 bicycle is just as important as someone in a $50,000 car. That was significant.

Driving Change (DC): How have things changed during the pandemic?

EP: Over COVID the current mayor added 50 kilometers to our 550 kilometers of bikeways that are now protected by the police on some very important roads. And all our new road building contracts required room for protected bikeways. Initially this was controversial. But because roughly 30% of the usual number of cars are on the road today, it’s not much of a source of conflict. Citizens of all socio- economic levels are now biking. And many women too.

Crime is a big problem in Bogotá. So more than bike sharing we have a need for safe bike parking in parking lots, at mass transit hubs and at office buildings. Currently, next to our TransMilenio terminal stations there are spots for perhaps 6,000 bikes to park. The new Metro under construction will also have parking for nearly 10,000 bikes.

DC: What are the critical success factors for integrating micromobility into a comprehensive transportation system?

EP: Bogotá has insufficient road space. We have more traffic jams than elsewhere despite just 25% car ownership. Many people with cars ride bicycles or use public transport because it’s faster. Pre-pandemic, our bus system moved more passengers per hour per direction than all the world’s subways except for perhaps three or four—over 2.5 million people daily over 114 kilometers, or roughly twice as many passengers per kilometer than most subways. This will grow by 400,000 again in planned TransMilenio feeder lanes below the elevated Metro currently being built. So our story is unusual for a developing country. Car owners use public transport and bicycles.

Some use both. Our intermodal stations have large bicycle parking facilities. Also, many companies provide free bicycle parking for their employees; some have showers and lockers. The city also created a prize for employers’ best bike parking programs. Some are super.

We also restrict car use. In our ‘peak hours’ system, cars with even-numbered license plates can go out during rush hour one day, and those with odd-numbers the next.

The new mayor is creating some very radical, high quality bikeways – better than those we had before. It’s an interesting experiment. 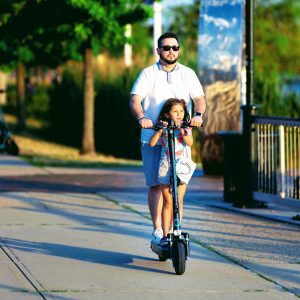 DC: How do you envision the future of urban mobility after so much experimentation, particularly in big cities in developing countries?

EP: We can’t solve mobility issues with cars. Here, just 25% of people have cars. Imagine what it would be like with 50%. The city would collapse.

For new cities being built, how can we build completely different and better? From my work on Lagos de Torca, a neighborhood under construction with 130,000 homes for 400,000 people, we learned that we need to build protected bikeways on every street and add libraries and greenways. This is how African cities can be better than London.

In my first term, Colombia, for example, was 50% urban. It is now 80% urban and its population has grown by more than 1,200%. Plus Bogotá grows physically at a faster rate than that of the population because households are smaller. So you need more homes for the same number of people. The number of households in Bogotá will double over the next 40 years even though the country is already 80% urban.

Today, India is only 35% urban. So India’s medium-sized cities will be 10 times bigger by 2080. Around 90% of these cities will be built over the next fifty years.

This is easy to do from scratch. You can design the cities of the future – which will be far more populous — for bicycle use so that cyclists needn’t share road space with cars. Most of these cities are tropical. So big trees can shade bikeways. We can do this for 90% of these countries’ cities. 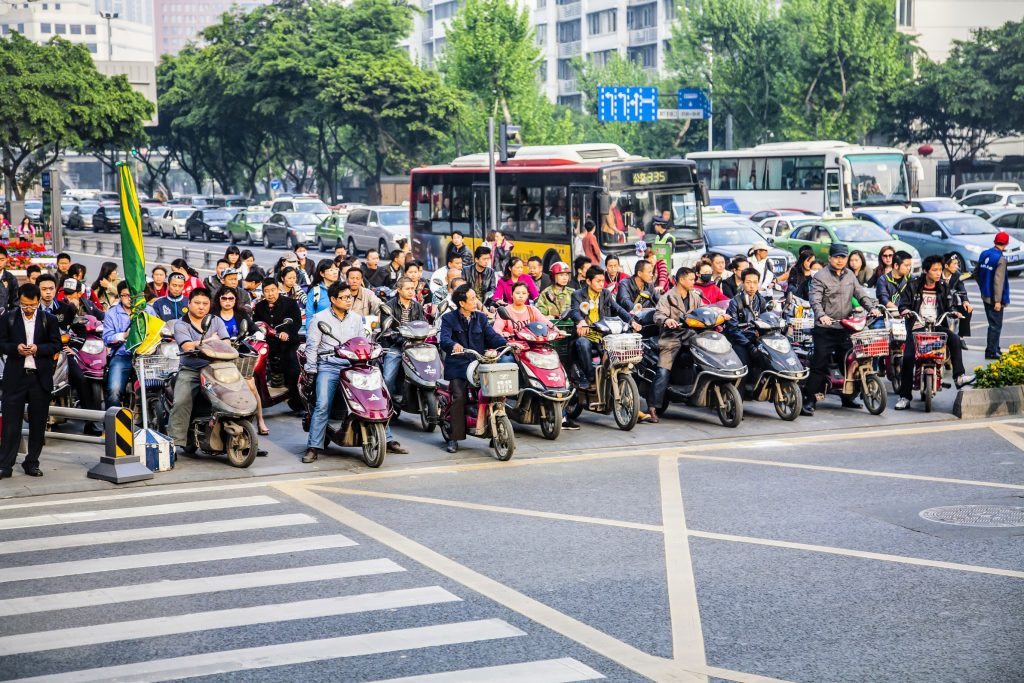 As for cities in general, some things will change. Like clean water, high quality ethernet is now a necessity and a right. This is basic. We also we need more green, more quality pedestrian spaces, more parks, more trees. And more surface public transport. More and more we should take space away from cars and give it to high capacity, high velocity surface mass transit systems.

Unfortunately, we lack good models of what a city could be in the developing world. We could have a network of hundreds of thousands of kilometers of tropical tree shaded greenways or bikeways with cars next to them. That is easy to do.

For example, New York’s Central Park was created in 1860 when the city was much smaller and poorer— ending at the rural border, where the city would grow. Developing country cities today are poorer and smaller and will not need to demolish parts of their city for parks if they put a park in the area where the city will grow, at its frontier. Then, 20 years later, it will be in the middle of the city.

Everyone knows about park architects, but nobody knows about the people who took the decision to create a park. India’s or Africa’s decisions will not be made by architects, but by those who govern. Those in national or local government, who make the laws.

DC: Tell us about your new book, and your emphasis on equality.

EP: I have been in love with cities all my life. I have had the privilege to be Mayor twice in my city, and to work in many cities around the world, giving lectures and consulting.

I believe the most critical issue of our time is equality. Today, private property and the market is considered the best way to manage most of society’s resources. I agree. However, the world has been fighting for equality for thousands of years. And cities are a powerful means to create different kinds of equality – not necessarily quality of income – and happiness. This has something to do with how transport is organized, about bicycling, elderly transport, pedestrian spaces and access to water. There can be a city that is neither Manhattan nor the suburbs, with density but much greener than Manhattan.

My goal is reaching people in developing countries who are building cities, with some ideas about what I believe are better cities – and highlighting some of the failures.

DC: What advice might you give aspiring public servants?

EP: We must first think of cities as existing for people, though this sounds obvious. Particularly the most vulnerable: those who are disabled, the elderly, children.

My goal is reaching people in developing countries who are building cities, with some ideas about what I believe are better cities – and highlighting some of the failures.

But we also have to be rational. Things may be in vogue but not smart. For example, in 1940, all large cities had trams. They were removed because buses were sexy. Trams were for the poor. Now it is the opposite. Today, if we want to revitalize the city center, we have to add cool and expensive trams. Look at the numbers.

Finally, expect many battles, because the biggest obstacles to making a better city is equality.

Better cities require democracies to assert their authority to achieve goals in which public gains can prevail over private interest. This may mean taking lanes away from cars, and giving the space to bicycles, or buses. This means making a waterfront accessible to everyone, with walkways and bikeways. That’s democracy.

We are so used to inequality that often we don’t see it. About 100 years ago, women could not vote. Not in Colombia, the US, England or France. Everybody thought that was normal. It’s the same today. We don’t see horrible injustices. Using the lens that allows us to see what is wrong is important. The battle to change things is very difficult. But it’s worth it.

Editor’s note: This interview has been lightly edited for brevity, clarity and context.