From Land to Sea: Are Floating Farms the Answer to Food Security?

On a bright, breezy autumn day, I make my way past road works and round-abouts to the shining waters of Rotterdam harbor. It is a mere 10-minute walk from the station. I find myself staring at a large floating construction from which the lowing sounds of cows can definitely be detected.  This is the floating dairy farm, the only one of its kind in the world. The brainchild of Dutch engineer and CEO, Peter van Wingerden, the Floating Farm is a high-tech alternative to traditional, land-based food production.

“We do not believe in economies of scale,” he explains. “We believe in economies of cities.” The reason is simple, large scale food production requires space, something which is traditionally scarce in cities. The result: a multibillion-dollar industry that involves the transportation of food across long distances with negative results for both the environment and food quality. The Floating Farm CEO talks of the transfarmation of cities – the inclusion of a number of small, smart farms located within the city limits, ensuring that food production remains local.

The Dutch engineer was working on a floating housing project on the Hudson River, just after Hurricane Sandy struck. He clearly remembers the empty supermarket shelves. “I realized that no matter whoever you are, a billionaire or someone sleeping on the street, we all need fresh food, and a city typically has food for only two days.” If one wants to produce food near the city, there are rooftops, caves, or the water – “coming from the Netherlands, I obviously looked at the water,” he admits. The Netherlands are world leaders in agricultural innovation.

Peter van Wingerden envisions a return to pre-industrial times when plants, animals, and people lived in symbiotic harmony with one another.

He was able to get Rotterdam local government to provide an extended lease on the land alongside the water with no special zoning conditions apart from the requirement that the Floating Farm comply with normal regulations concerning noise, smell, and emissions. Nevertheless, van Wingerden says the land was highly polluted and needed significant cleaning before it could be used for the cows. He expects permission from local government for a second floating farm alongside the first one to be granted soon.

The Floating Farm has three tiers, two above the water and one below. The dairy cows occupy the top level, underneath is the level where milk production and manure-processing take place. Below the water is a large space that van Wingerden describes as “something completely new.” It will be launched officially in a couple of months. Less energy is needed to maintain stable temperatures in this underwater space, which means it can be used to make vertical farming more cost effective.

Energy and labor costs top the list for vertical farming. The floating structure is attached to two concrete pillars that sit 13 meters into the sea bottom. It slides up and down these pillars as sea levels rise and fall with the tide. Engineers and researchers from the University of Delft and Wageningen University and Research helped find solutions to various technical problems. 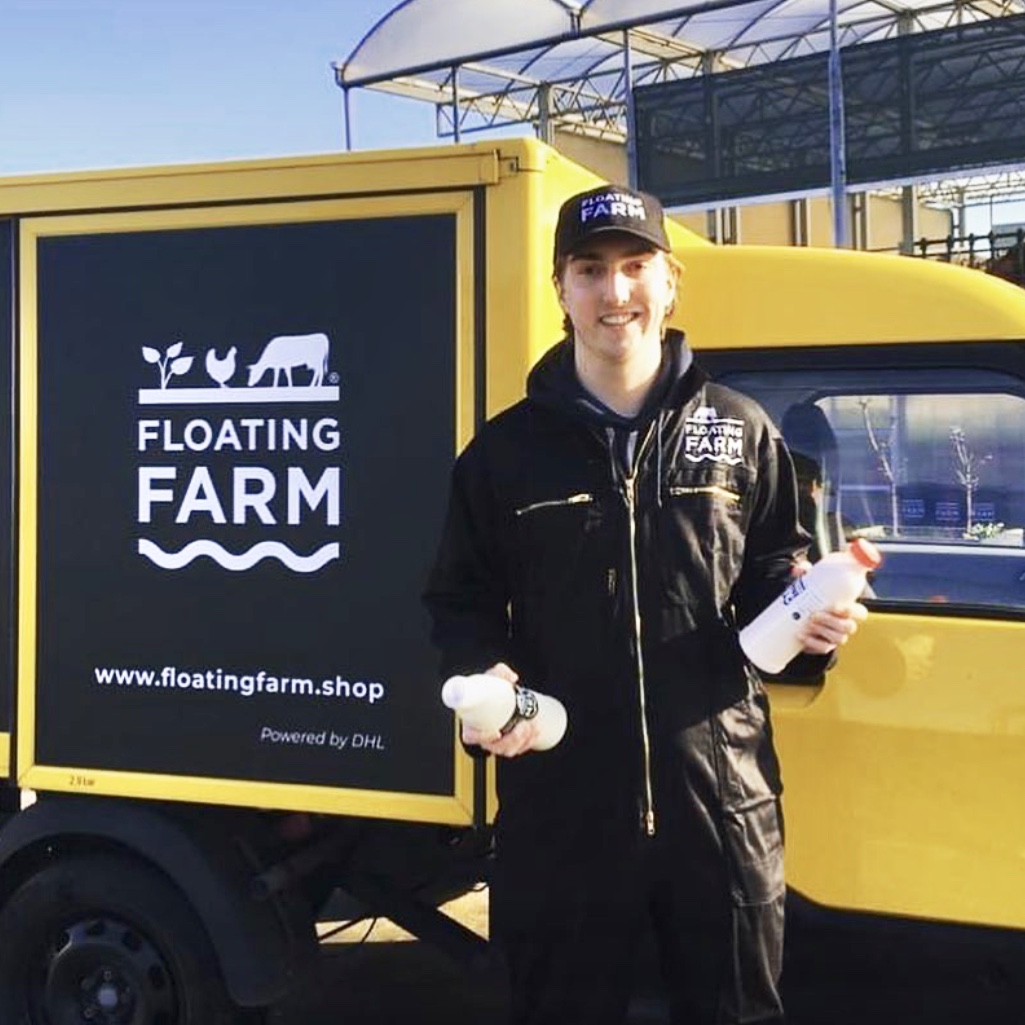 The CEO envisions a return to pre-industrial times when plants, animals, and people lived in symbiotic harmony with one another. The caveat: high levels of technological innovation are needed to enable a return to this pastoral paradise. The cows sleep and eat on the floating structure but are free to move back and forth between land and sea during the course of the day via a sturdy gangplank which leads to a small, green meadow. Every cow wears a necklace with a chip in it. Data on their food intake, milk quality, and overall health is collected via this chip and fed to the automated milking machines. Cows wander into the milking area of their own accord and leave when they’re done.

Peter van Wingerden admits that concerns about animal welfare, largely generated via social media, could have been avoided with a clearer initial communication strategy. He also confirms that further measures have been taken to secure the gangplanks from which two cows fell, unharmed, into the water, earlier this year. “Actually, the way it happened was quite unbelievable, but cows fall into the water sometimes on regular farms too.” Fortunately, he reassures, “they are really good swimmers!”

The farm operates on a circular model. I see wheelbarrows full of bread, crates of cucumbers, and piles of orange skins delivered from nearby shops and supermarkets. Interest from the cows reaches fever pitch when large black bins full of freshly mown grass are wheeled up the ramp – “this comes straight from Feyenoord football stadium right here in Rotterdam,” van Wingerden tells me with pride, “the cows love it and the kids love feeding it to them.” Manure is collected by a robot which delivers it to the processing plant down below where wet and dry matter are separated and recycled into organic fertilizer and clean water for irrigation. The organic fertilizer comes in pellet form and is used in city parks.

It’s obvious that we need to change the food system.

“It’s obvious that we need to change the food system,” says the engineer. For this reason, they work mainly with local retailers and consumers. Delivery of goods remains local and is done by the Floating Farm via electric vans. This means that their products contain no preservatives or additives. The CEO admits that the business was hit hard by COVID-19. Despite this, they expect to break even by year end. Plans for a second floating farm are already underway. This one will be dedicated to the production of vegetables and chickens.

Peter van Wingerden and his team are currently in talks with interested parties in Singapore, India, and China. They are also investigating options to build floating farms in New York, San Francisco, and Seattle. But progress is slower than he would like. Entrenched distribution systems that provide thousands of jobs and long-held beliefs about definitions of farming and farms are difficult to change. The Floating Farm currently employs 50 people, some of whom are volunteers, the rest are technicians, engineers, and high-tech farmers.

Vertical farms such as this one will need to provide solutions to both food and job security in order to be truly sustainable.

Humanizing Cities: Halfway Between Rio and 2050

Finally, COP26 reaches an agreement, but it’s still a COP out.