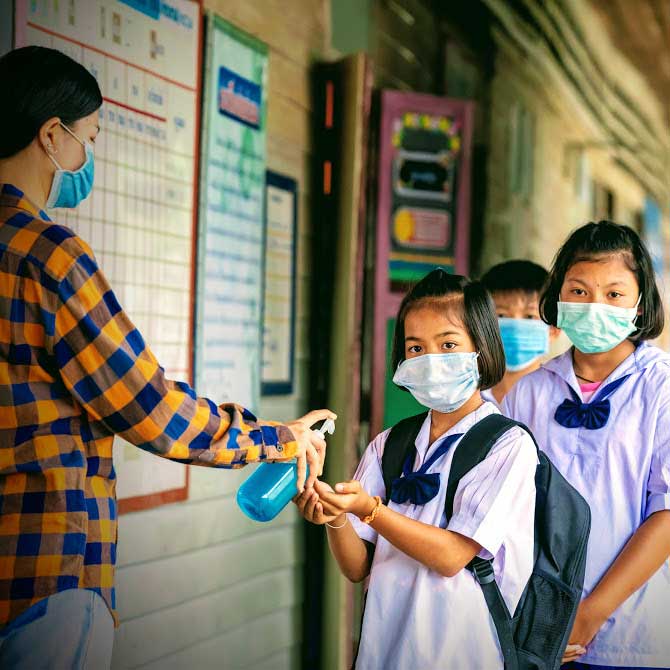 At the peak of Covid-19 lockdowns globally, an estimated 1.5 billion children in 195 countries were out of school, either learning remotely or not at all. This almost certainly both damaged their education and reduced the productivity of the millions of working parents who suddenly had to combine operating a home office with child care. For policymakers, there have been lots of important lessons about the importance of schools, not just for education but more broadly.

Second, schools help to promote inclusion: services to bridge inequity gaps are often doled out free of charge to those worse off in schools, along with nutritious food, counseling and childcare after the school day ends.  Minority families, many stretched thin, suffer disproportionately from these shortages in good times. At all times, their parents often form the backbone of essential work, in hospitals, subways and supermarkets. Working from home while overseeing primary school work is not an option.

Third, many poor communities lack laptops or broadband services at home – or the technical knowhow or time to troubleshoot video-classroom glitches. Though during lockdowns efforts sought to plug both gaps, inequities remain. Fourth, at-risk children (those with autism, for example) have been missing critical one-on-one care normally provided at school. Finally, teachers’ care for children during the day makes it easier for parents to work, or look for work. It will be much harder to reopen and revive the economy while workers have to juggle zoom meetings with micro-managing their children’s education.

In the past two months or so, about two dozen school systems have started to bring students back to classrooms, reopenings which bring valuable lessons to educational institutions elsewhere. They started in Europe and in Asia (with South Korea to the fore). In the Americas, Canada has been quickest to start to call kids back to school. Denmark, often contrasted in terms of how it responded to the pandemic with light-touch Sweden (where schools never closed) was the first country to reopen schools, beating neighboring Norway and Austria,  and even China—which resumed regular schooling in its two biggest cities in April. China’s measures included cell phone apps calculating each person’s infection risk.

So far France has been arguably the most informative experiment in school reopening. Its directives are tightly scripted, with detailed guidance, phased reopening and an emphasis on psychological support. Its national government is also earmarking some EUR250 million to aid in the transition, including museums, cultural centers and parks in the effort.

Despite being hard-hit by the pandemic, about five in every six French schools has re-opened, albeit with a scaled-back offering serving about a quarter of pupils in class sizes of around 15.

Many other countries are building on the French playbook, although there are plenty of disagreements about which categories of pupil should be prioritized for phased reentry. Possibilities include the level of density (schools in rural regions may well open first) to the level of poverty, to the ages at which experts suggest children are both more safe and more likely to benefit from face-to-face interaction. Globally, nursery schools tend to top the reopening priority list, followed by secondary schools.

In France, guided by a nationwide map color coding ‘green’ neighborhoods as safe to reopen, based in part on rates of  infections and hospitals’ unoccupied intensive care beds, primary schools opened first. France had hoped that every student would return to school at least once before the end of May. French guidance includes small class sizes and no shared toys. In addition, sidewalk markings allow students to enter schools in a staggered way. Arrows on school floors also direct student flow.

Classrooms are to be deep-cleaned several times daily. Masks are compulsory for teachers and older students. All day, students must keep six feet apart. Lastly, when possible, many classes (beyond the usual suspects of PE or art) may now be held outside, and outdoor play is allowed outside in some schools, sometimes within bounded play squares.

In a country widely known for top-down leadership, France has surprised many observers by allowing school reopening to be voluntary. (Mayors have the final say on whether to go back – some 300 of them in early May signed a petition for slower reopening; parents can opt to keep their children home). Educational minister Jean-Michel Blanquer assured them then that the national government would take responsibility for any school outbreaks.

In the UK, some schools reopened on June 1 for so-called priority students—then promptly shut. (Some children of essential workers and in vulnerable communities never stopped attending.)  Three-quarters of children in the approved age groups had never returned. Councils opposed to reopening had underscored the need for ample testing and tracing before they were willing to risk reentry. Studies also suggest that infection modelling might be off—and misinform educational policy. In the UK guidance is based on how the regular flu spreads rather than how SARS does. Asians tend to follow the guidance designed for SARS.

In the Southern Hemisphere, Australia, South Africa, Zambia and Singapore, like the UK, reopened schools no later than early June. In much of Africa, experience of past pandemics has encouraged enforcing healthier behavioral norms. In Zambia for example, children are sometimes turned away without masks. On New Zealand’s South Island, a concern for mental health has helped shape the reopening strategy as nationwide Covid-19 cases fell to zero. Much had been learned about childhood trauma after the 2019 Christchurch Mosque massacre and 2010-11 earthquakes. Strategies then to address childhood trauma include calming colors and relaxed routines allowing for more play.

As for the USA, despite presidential pressure to reopen schools, state-funded schools remain closed, save some in rural Montana which reopened in May. Many states are still undecided about whether to reopen this fall.  Early potential movers include Alabama and Georgia. Officials there hinted they might reopen schools this summer. At the other extreme, Colorado officials warned that in-school instruction may not resume before January 2021. US parents are cautious: some 59% of those polled by USA Today in May said they’d be “very” or “somewhat likely” to keep their kids at home if schools reopened. Meanwhile a Texas school district chose playfulness over academics just before the summer vacation. It shifted from an academic curricula to ‘life lessons’ such as how to change tires or making beds to ease stress.

Over this planning phase many US administrators are discussing a mix of actions, including buses at half capacity, closed cafeterias, desks six feet apart, as well as others similar to France’s, from phased reopening to staggered weeks to no toy sharing. And even as they move to reopen, education policymakers everywhere are simultaneously working on multiple scenario plans to shift course as needed. For instance, California is mulling more outdoor classes and earlier openings to allow students who had fallen behind to catch up. This might also help make up for future time lost over the closures following spikes in infections if they come to pass this winter.

Hoping for the best while planning for the worst seems wise. In mid-May, seven schools in Northern France were immediately shut after reports of their 70 infected people. (Studies had showed that small outbreaks would be likely after schools reopened and could be contained if hospital bed capacities remained high.)  Australia also temporarily shuttered two Sydney schools in late May after a few school-borne infections. These closures trail others in South Korea in late May following school-based outbreaks.

In Israel 130 students were infected in one reopened school alone. That pushed the government to shutter 15 schools immediately this month and isolate nearly 7,900 people connected to the 261 infections among teachers and students.  Infections spiked after class size rules eased. An outlier for its controversial policy of cell-phone-based tracing of all connected to those who contracted the virus, Israel is also now reconsidering its isolation policies.

Whatever the future use of school closures in lockdowns, damage has been done. Studies already point to losses in reading and math, particularly within minority communities.  How to balance infection risk against other costs, such as widening racial inequality, will require hard choices. All eyes are on New York City, America’s Covid-19 epicenter and home to the nation’s largest education system, with 1 million pupils, which has yet to reveal its plans for the next school year.

Sustainable Skies: The Case For Pandemic Bailouts With Green Strings