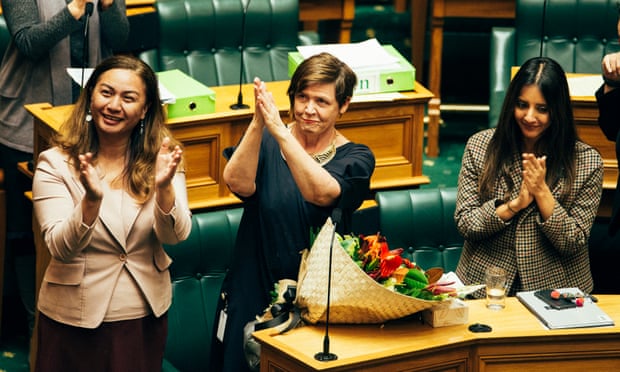 For decades, New Zealand has been a world-leader in a category nobody wants to win: it has one of the highest rates of domestic violence in the developed world. In 2018, the country’s police investigated more than 133,000 cases of violence within families, and responded to an incident every four minutes. Domestic violence is thought to cost Kiwis between NZ$4.1bn-7bn ($2.8bn-4.7bn) annually. The country’s dismal record, with Māori women and girls disproportionately affected, is widely blamed on high levels of social and economic inequality, as well as drug and alcohol use. This spring, as lockdowns were introduced in the face of the covid-19 pandemic, countries all around the world reported spikes in domestic violence, attributed to victims being restricted to confined spaces with their abusers, as well as to rising stress levels due to the twin financial and health crises.

(The United Nations—which called the phenomenon a “shadow pandemic”—estimated that reported incidents have risen by 20% worldwide, though the true increase is probably significantly higher.) Despite seeing a similar rise, the New Zealand government has won plaudits for its reaction, which saw attempts to help domestic abuse victims built into its broader (and widely praised) lockdown preparations from the very beginning.

Much of New Zealand’s response can be attributed to the work of the Family Violence and Sexual Violence (FVSV) Joint Venture, which was established in late 2018. The joint venture was a new way of working for the government, bringing the chief executives of the ten departments that deal with aspects of family violence and sexual violence—including the ministries of health, justice, social development and education, as well as the police—into a single group, with the power to direct the whole of the government’s strategy and budget. The FVSV’s work is informed by Te Rōpū, a Māori advisory group.

The disadvantages of the previous system were profound, according to Fiona Ross, who was appointed director of the FVSV in April 2019, having previously been chief operating officer in charge of strategy at New Zealand’s Treasury. “Like most countries, New Zealand has never had a shortage of attempts to improve the system,” she says. “The trouble [was] that, for all the years of hard work and goodwill, it was a fragmented system delivering fragmented results.” Abuse victims reported difficulty navigating, or even understanding, how to get help.

By contrast, Ms Ross says that the FVSV helps engender a “more joined-up, collaborative approach”. This helped the group put in place innovative ways to help victims get support during the covid-19 lockdowns, including “silent calls to the police; shielded website access to family violence information where the browser history couldn’t be tracked; [and] information on support and services in pharmacies and supermarkets”. “I think joint venture agencies became very pragmatic about getting results,” Ms Ross said.

These initiatives have been accompanied by a significant increase in funding. In May, Jan Logie, the Under-Secretary to the Minister of Justice and the lead Minister for the FVSV, announced that domestic and sexual violence services would receive a record investment of more than NZ$200m over the next four years. (Prior to both the pandemic and the FVSV joint venture’s creation, Ms Logie is credited with pushing through a landmark bill that granted domestic violence victims 10 days of paid leave to help them leave violent partners and find new homes.)

During this year’s crises, the FVSV’s achievement has not been to prevent domestic violence occurring—otherwise New Zealand would not have seen a similar increase in reported incidents as other countries—but to support victims once abusive situations occur. Of course, it would be preferable to prevent these happening in the first place, though that is a far tougher challenge: research shows that intimate partner violence increases after most types of disasters, including fires, earthquakes, and hurricanes. By earmarking resources to cope with a foreseeable increase, New Zealand has at least outperformed countries like the United Kingdom, which—according to a New York Times report based on interviews with government officials, support workers and abuse survivors—failed to prioritise domestic abuse in its lockdown planning and, by July, had only provided frontline organisations with £1m (1.3m) in extra funding (despite promises of £37m). There are signs, too, that New Zealand is attempting to reduce future incidences of domestic violence: NZ$16m has been allocated for services aiming to rehabilitate perpetrators, including the “Hey Bro” hotline, which provides advice for abusive men.

The joint venture model is now likely to be copied across New Zealand’s government. At the end of July, the country’s parliament passed the Public Service Legislation Bill. The new Public Service Act makes it easier for different government departments to work together—as many have done during the coronavirus response—and encourages the creation of joint ventures. “We saw the public service at its best in the immediate response to COVID-19, as is often the case in times of crisis,” said Chris Hipkins, Minister of State Services, in announcing the Bill’s passing. “It is no longer possible for any one single agency to fix the really big and complex problems New Zealand faces today.”