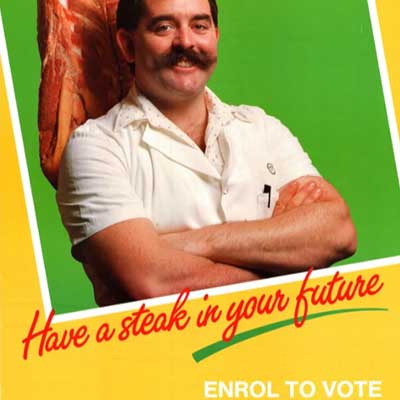 On a sunny Saturday morning, an orderly queue of speedo and sandal wearers forms outside Bondi Surf Bathers’ Life Saving Club. One-by-one, people disappear inside, re-emerging a few minutes later. Most then collect a hot sausage smothered in ketchup from the nearby barbeque stall before meandering down Sydney’s most famous beach for a weekend swim.

This is not a casting call for a remake of Baywatch. It’s a national election, Down Under.

Back in 1924, worried that voter turnout was hovering at perilously low levels (of 50-60%), Australia made voting compulsory. The effect, though not total, was immediate, and lasting. At every election since, turnout has been between 93%-95% of registered voters. As of June this year, 96.5% of eligible voters were enrolled to vote, according to the Australian Electoral Commission (AEC), which is now working to raise it all the way to 100%.

The commission is a widely respected, non-political body. Run by an ex-military commander, it is scrupulously clean and vehemently non-partisan.

The one and only scandal to hit the organisation, in 2013, involved a box of votes in a state election falling off the back of a truck (yes, literally: this is Australia). Contrite, the commission re-ran the entire election to make sure the result could be trusted. Its then-chief resigned in disgrace.

Tom Rogers, a civil servant who spent 17 years of his early career in the Australian army, including a stint as Commander of a United Nations observer mission on the Golan Heights, took over in 2014. Since then, he’s run elections – events that the AEC claims are as big as anything done in Australia – like a military operation. 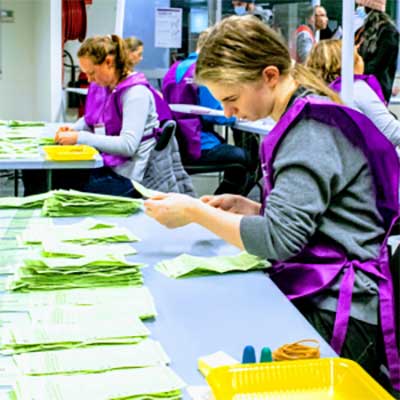 It’s this military experience that makes Rogers the ideal candidate for the job, says Lisa Hill, a professor of politics at the University of Adelaide and an expert on Australia’s electoral system.

Ex-military officers, she says, have “never been allowed to let ideology intrude on anything. They are basically apolitical people. They just like things to run like clockwork and they know how to do it.” That’s important in a country whose landmass roughly equals that of the United States.

Australia is one of 22 countries with some form of compulsory voting and is widely considered to operate one of the world’s most trusted and respected electoral systems.

What makes compulsory voting so successful, says Hill, is that it ensures that Australians don’t just have the formal right to vote but that they can easily exercise that right.

Hurdles to voting in, say, the United States, such as long queues, strict ID laws and prison voting bans, “could never happen here,” Hill says. The electoral commission “really does want you to vote.”

Aussies, in turn, tend to see voting as a duty. Around three-quarters of them say they support compulsory voting. Non-voters are penalised, but with fines of only around US $15 the system relies far more on carrot than stick. Around 5% of ballots are counted as spoilt, but while some of these are undoubtedly blank ballots or protest messages others are simply unintentional mistakes.

The AEC goes out of its way to make sure that even the most marginalised voters can cast their ballots: its officers visit remote Aboriginal settlements, prisons, maternity hospitals and care homes with ballot papers ahead of each election. The commission sends voting packs to scientists in the Australian Antarctic Territory. More than one-third of votes are now collected before the official polling day.

Hill chuckles recounting a project she undertook with the AEC to enrol voters at homeless shelters. After a morning of slow progress, the officer in charge was genuinely delighted to enrol just one man to vote. “I thought, these people are for real!” she laughs.

Compulsory voting, she believes, is a crucial tool for empowering disadvantaged people. Not voting can be a rational choice for marginalised groups in voluntary voting systems. If people don’t see other people like them voting, they won’t think their vote can make a difference. “It’s a prisoners’ dilemma,” she says. By contrast, in Australia, a person on unemployment benefit may think, “there’s a critical mass of us standing up. I’m not just a drop in an ocean.”

“The collective action problem is solved by the government.”

The lack of corruption in Australia’s electoral system stands in direct contrast to the United States, where candidates need to spend huge sums of money just to grab voters’ attention, she believes.

Because of this, working with the AEC can be something of a frustrating experience, as they are so “strictly impartial and independent.” She was surprised to find the commission screening for political affiliations post-graduate students working with her on a collaboration with the AEC, to ensure the project would be strictly non-partisan.

The role of the Commissioner, she says “is so important. They have so much responsibility and they can’t get anything wrong.” There is so much public and parliamentary scrutiny that “no Commissioner can do a bad job and stay in their role.” That Rogers is on track to hold the post for at least a decade (his 5-year term was renewed in 2019) is itself a ringing endorsement of his performance.

“Trust in your democracy is like the fairy dust you sprinkle on a whole culture,” Hill says. “It infiltrates all aspects of our lives and the way we interact with each other.”

Polling day is “quite a festive occasion,” she says. The Bondi beachgoers bearing their ubiquitous ‘democracy sausages’ purchased from the community fundraising stalls outside each polling station  seem to agree.

The Secrets Of Getting A Positive National Image