Cities Are For Humans, Even After Covid. Interview With Urban Visionary Jan Gehl 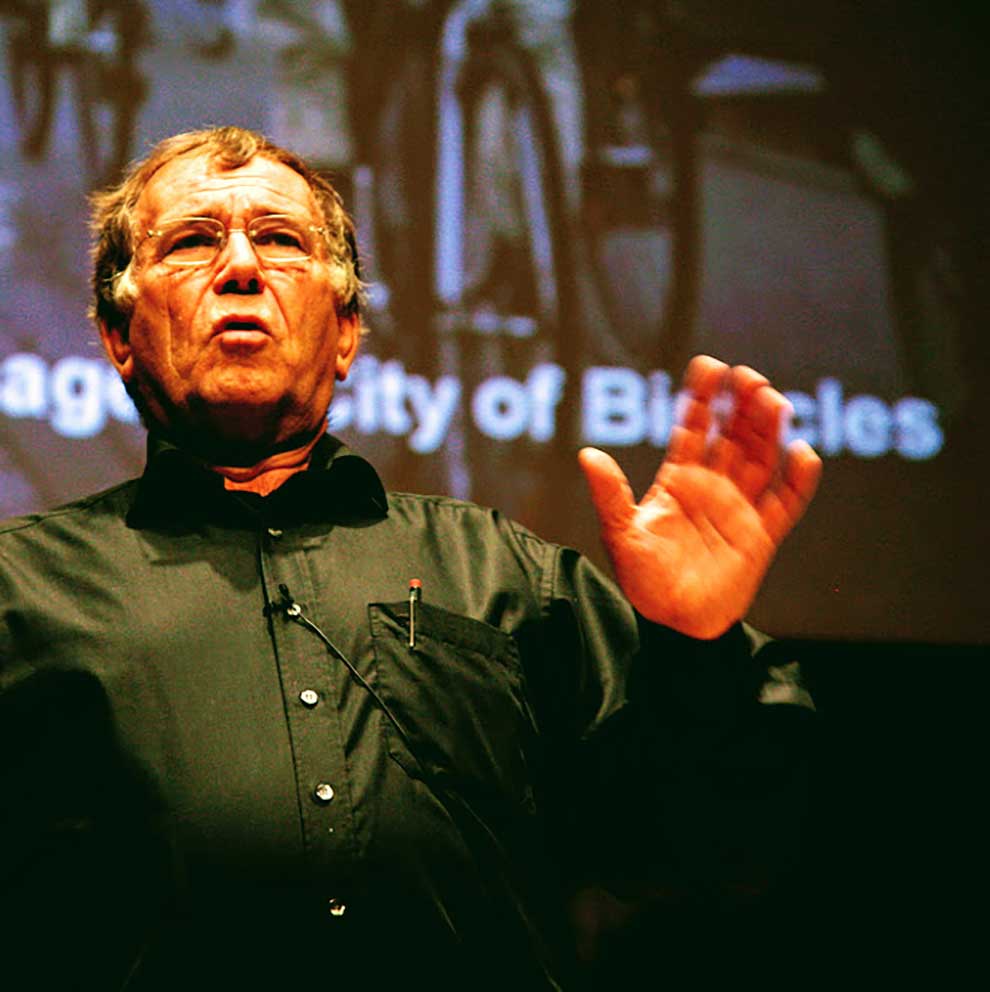 While others have called for a more humane approach to cities over the years, arguably no one has had as much influence on shaping urban spaces and shifting the way we think about urban design as Jan Gehl. His remarkable career has been proof of the truth of his belief that “cultures and climates differ all over the world, but people are the same. They’ll gather in public if you give them a good place to do it”.

Covid-19 has not shaken his faith. City planners, he tells Driving Change, must not panic and make the same mistakes modernists did when they came up with communities where everyone lived far away from each other for fear of tuberculosis, for instance. “Doctors came up with a treatment, and then we were left with many blocks of isolated citizens. They didn’t realize that by speeding everybody out so they could have fresh air, they ruined the social life of the cities. And that was a serious offense. Some people say now we should only have sidewalks that are six-metres wide. I disagree completely. We cannot live without having cities on a human scale,” he insists.

The ideas of the famed Danish architect, now 84, have had a huge impact in terms of reorienting urban planning and construction, reclaiming cities for people after modernist building principles and the great car invasion reshaped most cities for the worse after World War II. He says he didn’t really question the theory behind the modernist monolith until love made him see things differently.

“I was just out of school of architecture where I learned of the brave new time where automobiles were to solve all the problems. The cool thing was to build freestanding buildings instead of cities. And then I married a psychologist. We were able to meet from two different silos of social sciences. She kept asking, ‘Why are you not interested in people? Why don’t they teach anything about people in schools of architecture? And why do professors go out at four o’clock in the morning to take photos of the monuments to be sure there are no distracting people in the foreground? Have you thought about that?’,” recounts Gehl.

And that was sort of the start. Right after this realization that the prevailing conception of architecture was incomplete, Jan and Ingrid, his wife of almost sixty years now, ignited a lifelong mission of putting people at the center of city planning, and they have been influencing public policy ever since.

Their home city was their first laboratory. In 1962, they devised a plan to transform Copenhagen’s public spaces by reducing parking and traffic in the city center and by creating more sidewalks, bike lanes and public squares. “Every city has wanted to collect all data possible around cars ever since they were invented. Traffic engineers got excellent data about the development of traffic. At the same time, there was not a single place that had information about how the city was used by people. Copenhagen became the first city in the world that had as much data about the people as about the traffic”, says Gehl.

After a while, this started to have quite an effect on Copenhagen’s planning policies. City officials started coming to the school of architecture seeking insights into how people were using space. They sent enough money to the school to keep Gehl’s studies going. “Then the data collection effort moved from the school of architecture to City Hall, where they do it painstakingly every year to make sure they have as much data on people as they have on traffic. And they use it continuously”, he explains. Copenhagen is now recognised as one of the most livable and nicest cities in the world, as well as perhaps the best city in the world for bicyclists.

In 2000, Jan Gehl founded a firm to implement his vision for human-centric planning in cities around the world. From a small office in central Copenhagen, Gehl Architects has grown into an international team of over 80 collaborators dedicated to the development of a human scale, people-first approach. Its projects now run to over 50 countries and 250 cities around the world.

As well as Copenhagen, Gehl’s pedestrian-centric model has been replicated in megalopoli including New York City, London, Moscow, Melbourne, Sidney and several other medium-scale cities across Europe, the Middle East, Japan and China.

The global uptake of Gehl’s ideas reflects the genuine experience that something special occurs when people come together in well-designed cities – and he has the number to prove it. “I remember a quote from Michael Bloomberg, then the mayor of New York: ‘In God, we trust. Everyone else: Bring data’. Our work in New York was heavily anchored in data, which was instrumental in the decision to transform Time Square,” for example, says Gehl.

Before the revisions suggested by Gehl’s’ team, Times Square was just a name. There was no real square. Certainly, for decades, pedestrians had vastly outnumbered motorists passing through the area. But 90% of them were being squished into just over 10% of the area. After the city made the changes imagined by Gehl, the rate of injuries went down (for pedestrians, but even more so for motorists), traffic flow in Midtown improved, and local businesses thrived — a fact reflected in steeply rising values of retail space. It is a measure of that success that, until the pandemic hit, Times Square had become a bustling place, walked every day by up to 480,000 people, tourists and locals alike. New York is now a leader in the international movement to make cities more people-friendly, while remaining pragmatic about cars.

Today, as rapid urbanization continues around the globe, Gehl’s ideas are becoming ever more important to ensure that a growing number of people live in inviting, comfortable, safe, urban environments. He believes that good architecture is not just about form, but about the interplay between form and life. “The design of cities should maximize the diversity of social exchange, while minimizing travel needs, enabling people to enjoy life in public spaces, creating chances for people to meet accidentally and intentionally, continually bringing people to the forefront”. Gehl regards neighborhoods and cities as places for human opportunity, so their design must ensure about how this opportunity is facilitated. “The latest miracle in city planning is the idea is that you can reach everything which is important in your life (hospital, workplace, supermarket) by walking or biking in 15 minutes max. I love it because it’s got human dimensions all over”, he reflects.

Though getting older, Gehl still exudes the enthusiasm of a beginner. Yet, effortlessly, he is using urban design as a political force. His ability to challenge the forces shaping each of the cities where he and his firm work, pushing them to change, and to tackle the dominance of automobile-based design and development, is a skill that all cities need. Making people more visible in planning is a talent that has led Gehl to collected fans and partners along the way, who celebrate and demand his expertise. Enrique Peñalosa, Mayor of Bogotá, Colombia from 1998-2001 and again in 2016–2019, became friends with Gehl in the 1990s, having become obsessed with getting cars off sidewalks and creating a network of protected bikeways hundreds of kilometers long. This work was painfully difficult. Cars had been parking on sidewalks, or where there should have been sidewalks, for decades. There was not one block in the city where somebody in a wheelchair could go from one corner to the other. “It is interesting that so much is known about good habitats for mountain gorillas and Siberian tigers, while, at the same time, very little is known about a good urban habitat for Homo sapiens”, wrote Penalosa in the foreword of one of Gehl’s’ published books.

Gehl’s legacy, above all, may be that he provides us all with solid reasons for hope. Every city has traffic issues that crowd out people from public spaces. Every city needs more provision of people-based public spaces. And they need to ally professional skills with political leadership to enable good options to be constantly envisioned and delivered. Gehl has shown the world how to do this in different cities across the globe. It is fascinating how alike and how different cities can be, and even more fascinating to imagine what they may become. As Gehl likes to say: “A good city is like a good party. People stay longer than is really necessary because they are enjoying themselves”. After the pandemic, hopefully that will be true once again.