Building for the Future Without Waste 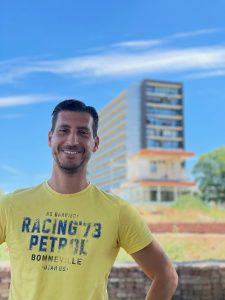 Imagine if buildings in the future could be constructed and dismantled like Lego houses. Using the same blocks for a variety of constructions that conform to individual needs and tastes. This is how Victor Moura and Marco Theunissen explain the idea behind the SUPERLOCAL circular estate building project in Kerkrade, the Netherlands. It is the first of its kind in Europe.

In the southeast area of the Netherlands, in the province of Limburg, the municipality of Kerkrade faces depopulation. In the next 30 years, the number of residents in the Parkstad area is expected to shrink by around 27%. The municipality has calculated that of the 400 apartments housed in four tower blocks, only about 130 will be needed in years to come. So, they have started to pull some of them down.

“When you demolish an apartment block, it is not only the physical structure that is destroyed, but also the memories and sense of community of those who live there.” says Moura, Project Manager for Nature & Landscape in the town of Kerkrade.

One of the biggest problems that I have encountered on this project is legislation.

The 2012 demolition of the first of these apartment blocks made this clear and prompted the local government to look for other options. In 2014, Kerkrade  started to look for sustainable demolition options. One solution, from contracting company Dusseldorp, was simply to saw an existing apartment out of the block and place it on the ground as a new, free standing home.

“We were flabbergasted by this completely new idea!” admits Moura. The municipality decided to go with it and the SUPERLOCAL project was born. Recycling the apartment in this way saved one million kilos of CO2 emissions.

In building this new, circular housing complex and shared outdoor space in the Parkstad area, the goal was to use only recycled materials. Making this happen has proven to be difficult. Moura admits that they have only been partially successful in this ambition. 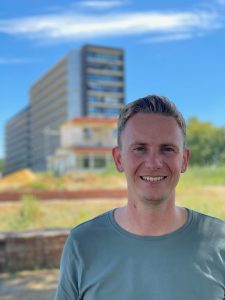 However, fellow project manager, Theunissen, explains that three model homes built with a grant of €4.7 million from the European Union’s Urban Innovative Actions initiative were constructed using  90% recycled materials. This small experiment offers hope that future construction will have greater levels of sustainability. “We are investing in the future” agrees Moura, “and this costs more money and time.”

This approach to demolition and construction is the first of its kind in Europe and may provide a blueprint for counties and countries, such as the Netherlands, which plan to be 100% circular in their building methods by 2050. “This is a very high ambition,” says Theunissen. “I don’t know whether we’re going to make it or not!” He agrees that the EU will have a role to play in helping countries like the Netherlands make such changes, which is why the European Regional Development Fund has co-financed the SUPERLOCAL project.

This circular housing estate has been designed to support a variety of sustainable solutions that meet both material and social needs. Today, it has approximately one hundred subsidized housing residents and future plans include twenty free market homes, which will be open to anyone who wishes to buy.

In building this new, circular housing complex and shared outdoor space in the Parkstad area, the goal was to use only recycled materials. Making this happen has proven to be difficult.

There are indoor and outdoor communal spaces to facilitate socializing between residents. There are five different apartment styles and sizes within a block, allowing for a mix of families, singles, and couples.

Not only have apartments been built using recycled material, the estate is also equipped with a closed water cycle system. A subsidy of €2.5 million from LIFE, an EU program dedicated to developing and implementing environmental policy in Europe, helped pay for this.

Three different water systems together create a fully sustainable water cycle. Rainwater is collected to provide clean drinking water. Gray water used for washing is cleaned using natural plant filters and black water from the toilets is processed via a vacuum sewer which uses air rather than water to transport the waste to the recycle point. The hope is that this waste can then be used to fertilize the outdoor gardens, but at the moment Dutch law does not permit that. 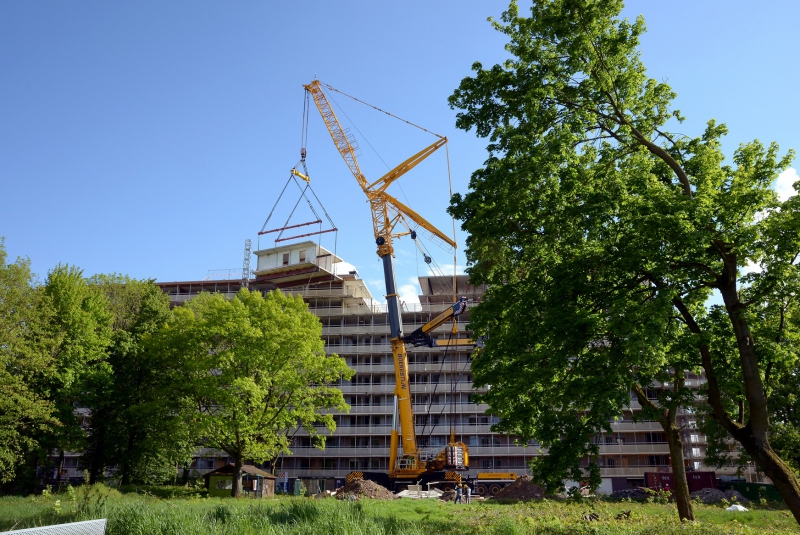 “One of the biggest problems that I have encountered on this project is legislation,” says Moura. Both he and Theunissen agree that legal frameworks around construction will need to change if the Dutch government is to realize its 2050 circular building target.

However new legislation making it obligatory for municipalities to involve residents in building projects comes into effect next year in the Netherlands. The SUPERLOCAL project involved a Neighborhood Steering Committee from the beginning. This has allowed residents to be part of the planning process via co-design workshops for both the indoor and outdoor shared spaces.

When you demolish an apartment block, it is not only the physical structure that is destroyed, but also the memories and sense of community of those who live there.

“Sometimes we had good discussions, sometimes we did a lot of things wrong!” admits Moura when reflecting on their collaboration with the residents. “But it is necessary to work like this because it provides you with another perspective.”

The SUPERLOCAL project has taken seven years and is not yet finished. Typically, a building project of this size will take two to three years. Moura and Theunissen agree that is a long time for those affected by all the construction work. “A big challenge for SUPERLOCAL is keeping all the neighborhood happy,” says Theunissen.

There has been a lot of international interest in the project from local governments, environmental groups, and even schools. Plans for an even larger circular region involving other municipalities in the area where there is a lot of poor-quality housing are being discussed.

In spite of the challenges, both men are positive about their involvement with the SUPERLOCAL project and would be happy to be involved in another such initiative. They enjoyed the freedom it provided but were also keenly aware of the responsibility that came with it. Moura describes it as a community building project, rather than simply a building project. “It is always rewarding when you finish a project,” he says. “But when you finish a project with happy residents, it’s more rewarding.”