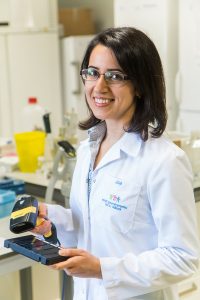 There are now over 100 biobanks worldwide, ranging from small university-based repositories to larger collections supported by governments. These collections of human biological samples, stored in cryogenic facilities could revolutionize medicine by giving researchers access to population-wide data through which they can study the interplay of genetics and disease. Done right, these are a powerful symbol of how governments, universities, and the private sector can work together for the common good by leveraging their unique capacities — and acknowledging their weaknesses.

“Biological samples are taken in clinical care as part of hospital visits or doctor’s visits,” says Dr. Lili Milani, the Swedish-born head of personalized medicine and research professor at the Estonian Genome Center, one of the largest biobanks in Europe. “Many are thrown away but there is great value in collecting these samples from the general population and following individuals over a longer time, as well as collecting clinical samples from individuals with specific conditions. Then we can do studies of why diseases occur, and why people respond differently to different treatments.”

For Milani, one of the world’s leading biomedical researchers, biobanks can be used to reveal genetic variations that put certain people at higher risk of diseases, or that could make them less likely to respond well to a medication or suffer side effects. “As we uncover findings about how genetic variants influence the onset of disease and outcomes, we can put these into treatment recommendations and guidelines and use this information to improve healthcare.”

We can do studies of why diseases occur, and why people respond differently to different treatments.

Additionally, pharmaceutical companies can harness this data for drug development. Milani gives as an example the genetic analysis of individuals with very low cholesterol, which could then be used as a target for designing therapies.

Government is a key player in biobanking. Partly, they provide essential seed funding. Multiple tranches of funding from the Estonian government have allowed the national biobank to expand by over 100,000 participants in recent years. Milani also cites the U.K. Biobank and 100,000 Genomes Project as state-backed initiatives with major research innovation implications. “That is an investment the U.K. government has made to see these services move from ‘bench to bedside’, from research to improving healthcare,” she says.

She also believes government plays a role in shaping the rules and oversight of biobanks. These are not without controversy and risk on issues such as consent, ownership and use of data, and the rights of the private sector to access such data and eventually profit from it. Countries need biobank governance to control access and uses of data. But they also need to inform the public about the benefits of data gathering on a population level and address fears and anxieties.

“Public trust is central to being able to collect large scale samples from the population,” says Dr. Milani. She cites the U.K. and Nordic governments as having done “a good job in communicating why it is necessary to donate samples in terms of public messaging campaigns and talking about how data saves lives. If we can’t analyze data, we can’t make better healthcare services.”

In Estonia, she says, there is plenty of communication and reassurance about how biobank data is handled — it is, for instance, both anonymized and “locked up in a room without an Internet server.” The country has strong regulations on usage rights, such as restricting access by the insurance sector.

But government’s role is not just gatekeeping and regulation but also, actively encouraging greater participation where appropriate. Dr. Milani cites the problem of ‘data huggers’ — clinicians who view the biological samples they have collected as being their own. She credits the U.K. biobank as setting a gold standard in actively making data available to scientists across the world which is in turn driving “huge advances in genomics”.

Public trust is central to being able to collect large scale samples from the population.

Estonia has already won plaudits for its government’s pro-innovation agenda. It has the most digitally advanced e-government platform in the world and citizens interface easily and efficiently with public services all the time. The same innovative spirit pervades the biobank program.

“Innovation is definitely in the DNA of Estonia’s government,” says Dr Milani. “I really like living and working here. People are highly motivated to dream big and deliver big. It’s also a small country — the Ministry of Social Affairs is a call away. It’s quite easy to get decision-makers around the table to discuss things and make proposals. There are not too many layers of decision-making.”