Today’s stereotypical coder or computer scientist is white and male. While women make up 47% of the workforce, they only hold around one quarter of jobs in tech. In artificial intelligence, one in five professionals is female. Across the Science, Technology, Engineering, and Mathematics (STEM) field as a whole, women get smaller research grants, are under-represented in high profile journals, and are often passed over for promotion, according to the UN. 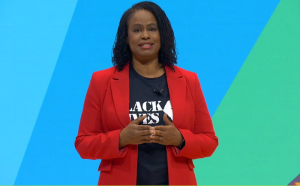 More concerning than these inequalities is the surprising fact that, on the gender front at least, the ratios have deteriorated in recent decades. Leading early pioneers in computing were women, including Grace Hopper, Ada Lovelace, and Joan Clarke. The reasons for women’s larger share was not entirely a welcome one — computing was viewed as an extension of secretarial work, as outlined in Clive Thompson’s fascinating history of the coding profession — but exposure alone was enough to unleash the talents of this early generation of women pioneers.

Brenda Darden Wilkerson, President and CEO of AnitaB.org, is one of the most influential minority women leaders in tech. Named after Dr. Anita Borg, a computer scientist who started a digital community for women in computing in 1987, AnitaB.org helps women and non-binary technologists find opportunities in science and technology-related fields and works with organizations to develop more inclusive hiring practices.

There is a huge technology infrastructure in the government needing diverse talent, but if you look for jobs, that’s where 90% of people will fall away.

For Wilkerson, the backsliding has tracked her own path-breaking journey as an African American female computer scientist. “When I started my career, the U.S. tech sector was 35% female, now it’s around 25%, and that’s coming back from a low of around 14%,” she says.

The problem starts early in life. “Data shows that girls decide whether or not they are good at STEM by around fifth grade,” she explains. If they are not exposed to role models and encouraged to see themselves in the world of STEM, those assumptions could harden over time. Being from a poor or minority background makes STEM and computer science even less likely to appear on a child’s radar.

“I didn’t grow up with a computer in my home and my school district didn’t think people in my neighborhood deserved or could do computer science,” she recounts. The daughter of a journalist who owned his own printing presses, she was exposed to engineering from an early age and majored in biomedical engineering, which led to a chance encounter with the field as her degree required that she complete two programming courses. “Just those two courses changed the trajectory of my entire career. Early access is a huge piece of what we’re fighting for.”

During COVID there was money [available] to stop people being evicted from housing, but people’s ability to access that money via the [technology] systems was limited.

Wilkerson is now a leading figure in education reform, having spearheaded the Computer Science for All movement to make high quality computer science a core part of the curriculum across K-12. Wilkerson founded the movement as part of her role as director of computer science and IT for Chicago Public Schools back in 2009. Her efforts quickly gained the attention of policy makers elsewhere, with incoming requests from New York City and the state of Maryland to help develop their own programs.

A series of National Science Foundation (NSF) grant applications put the issue on the federal government’s radar, she recalls, as personnel there often review grants as a useful gauge in monitoring government-relevant innovation trends. “The humbling part is there were people in D.C. watching who actually adopted that name and many of the ways that we were working on it.” 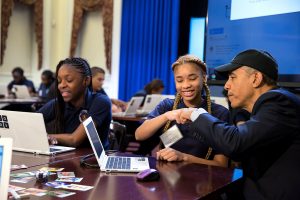 Eventually, President Obama himself — the first president in history to write a line of code — eventually took up the mantle with the White House’s “CS For All” initiative which included funding for teacher training, a framework for partnerships between tech companies and schools, expanded access to high quality learning materials, and support for states to make computer science a mandatory part of certification.

“The Obama administration was trying to create a national platform [for CS for All],” Wilkerson recalls. “It was a combination of top-down and bottom-up; grassroots meets the highest leadership of the land, addressing a problem that exists across the world: having a diverse workforce that understands the technology that is running our lives.” Wilkerson went on to work with Hillary Clinton in the lead up to the 2016 elections to make the initiative part of her administration were she to win.

Today, while Wilkerson’s focus is on the big picture inequalities in STEM, she believes the government itself needs to play a more active role not just in policy initiatives like CS for All but in reviewing how it hires its own tech workforce. She says the public sector lags the private sector when it comes to diversity. This is not just an access problem — it also means the technology that the government builds and manages is not designed with all users in mind. The implicit biases affecting AI and facial recognition are now well-documented. “I’ve been using Siri for years and it still doesn’t recognize my voice!” says Wilkerson, adding that design flaws are creeping into areas like virtual and augmented reality headsets which work less effectively on some women. Biases, whether of gender or race, become more than an inconvenience when applied to, for instance, facial recognition in law enforcement leading to false positives for non-white faces.

Government technologies shape and mediate all aspects of daily life, so any flaws in usability or access could magnify inequalities. “During COVID there was money [available] to stop people being evicted from housing, but people’s ability to access that money via the [technology] systems was limited, so very little got given out and many people were evicted. People need legal help but if systems don’t allow them through [poorly functioning] voice control, those barriers increase. The more we have people around the table represented by the need, the better the need will be served.”

The more we have people around the table represented by the need, the better the need will be served.

Getting more minority tech talent into government will need more than fixing the early years exposure — improving how governments advertise and promote jobs is also key to increasing awareness and engagement. “There is a huge technology infrastructure in the government needing diverse talent, but if you look for jobs, that’s where 90% of people will fall away. It’s hard to find, the titles don’t match what’s going on in the private sector, the application process is difficult with lots of chances to fall off the road.”

Making hiring processes smoother and more user-friendly and taking a hard look at inequalities in the federal government’s tech workforce, is critical to ensuring that investments in more tech-powered government leads to better outcomes for all citizens.

Alba Barrio Martin is Mayor for a New Rural Generation