Books Of The Year: The Lonely Century By Noreena Hertz 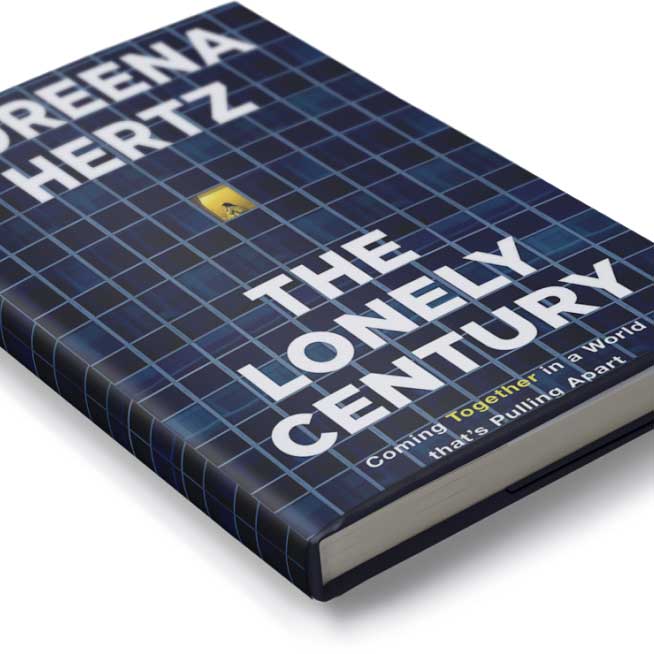 Until recently loneliness has not been seen as a public policy issue – but that is an oversight that policy makers are slowly waking up to. Isolation increases the risk of mortality by 26%, on par with smoking and obesity. It increases the risk of dementia, depression and suicide, and may even lie behind the rise of extremist politics.

So says British economist Noreena Hertz, in her new book, “The Lonely Century: Coming Together In A World That’s Pulling Apart”. One of Driving Change’s Books of the Year, it explores the forces that have given rise to today’s higher levels of social isolation, including digital technology, mass migration to cities and the breakdown of social bonds in high-rise buildings in which no-one knows their neighbour, and a culture of individualism under modern neoliberal capitalism, that emphasises personal over collective good.

Hertz is by no means the first writer to highlight the issue; Robert Putnam’s Bowling Alone (2000) bemoaned the loss of community, for instance. Yet she brings it into the 2020s by exploring how extremist politics and the COVID pandemic have both played into these existing social grooves.

Hertz believes that far-right politicians are exploiting people’s sense of isolation, making them feel part of a wider yet tightly defined tribe. She looks at the language used by populist politicians, such as Donald Trump’s campaign trail declaration about being “one national family…we will always protect, love and care for each other” and Matteo Salvini’s use of words like “mamma”, “papa” and “amici”. She builds this analysis on the seminal work of Hannah Arendt, who analysed the links between loneliness and the politics of intolerance. Hertz spent time with supporters of extremist groups and found that a sense of community, experienced through rallies and social gatherings, was a driving motivation for their participation.

Recent research has identified connections between social isolation and votes for France’s far-right Front National. Donald Trump voters are significantly more likely to report having fewer close friends and acquaintances than supporters of Hillary Clinton or Bernie Sanders. Loneliness can cloud thinking, making affected individuals see the world as more threat-laden, which in turn may be feeding into the rise of anti-science, fake news and conspiracy thinking.

Policy makers are catching up. In 2018, the UK government launched a loneliness strategy, giving family doctors new powers to refer isolated patients to community activity organisations and voluntary services in what has been dubbed ‘social prescribing’. Up to one-fifth of UK adults feel lonely most or all of the time, the government claims.

How easily governments can tackle the challenge, and whether neoliberal capitalism is to blame and if so what can be done about it, are both contentious subjects, on which readers of Hertz’s earlier books can probably guess her instincts. Yet whatever you think of her proposed solutions, she has done the policy community a great service in bringing to light a simmering issue that has too long been ignored.

How well do you know the policies of 2020? Take our quiz