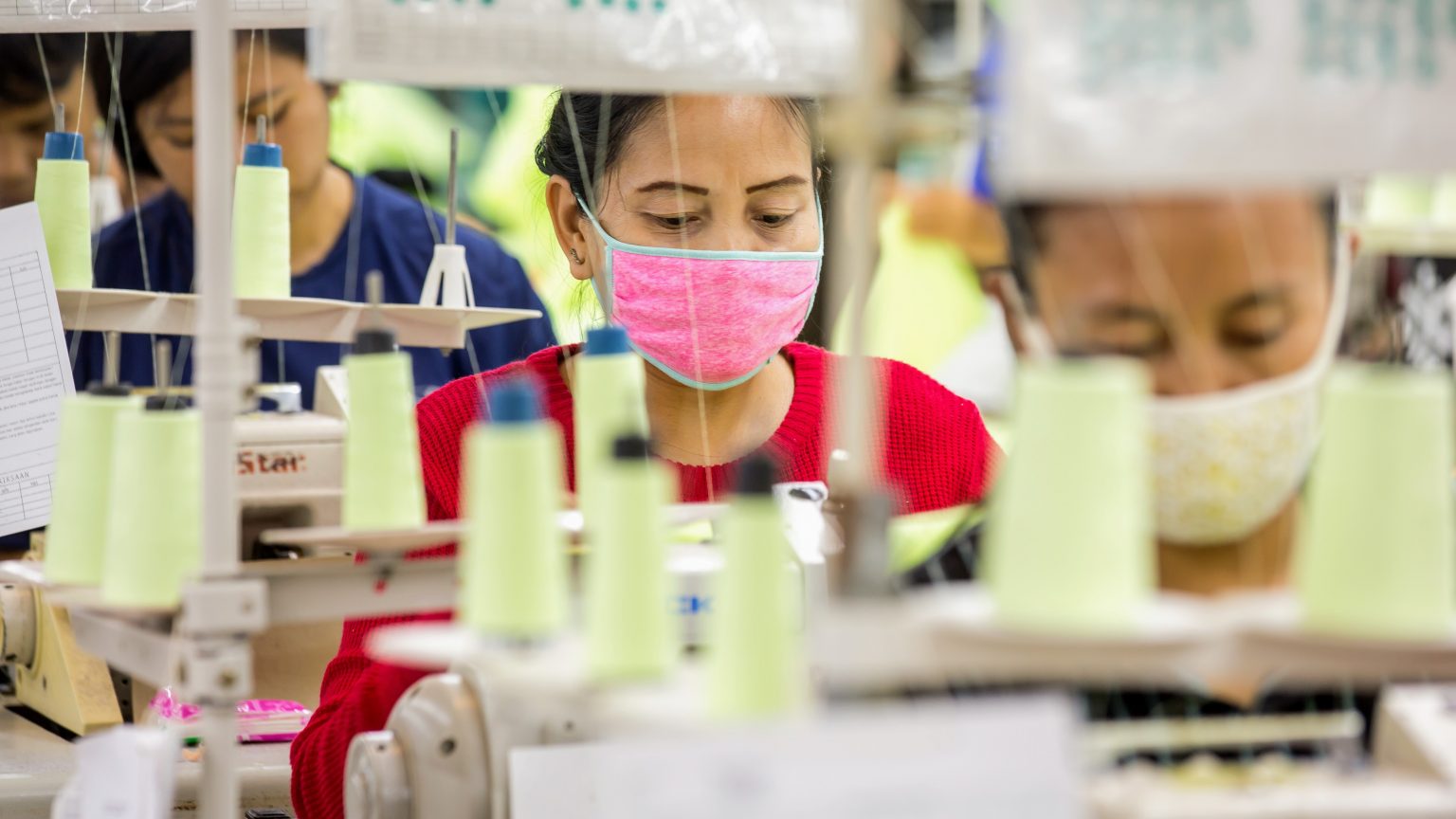 For several days in June 2020, in the midst of a raging pandemic, hundreds of women walked long distances from their homes to protest the sudden shutdown of a factory unit in Bangalore in southern India. The closure caused almost 1,300 garment workers to lose their jobs without fair warning or compensation. The factory made clothes for the global fashion brand H&M which, like many others, had cancelled or reduced its orders without taking into consideration the drastic effect that would have on workers in the Global South. During the first year of the COVID-19 pandemic, this was a much-repeated pattern.

To protect workers, the leaders of the Asia Floor Wage Alliance (AFWA), a pan-Asian labor rights alliance, acted. They conducted a survey and found some astounding results. Of the garment workers in India they surveyed, 89 percent faced either layoffs or termination at some point during 2020. In addition, 93 percent of them were pushed below the World Bank’s poverty line in April and May 2020, when India went into a sudden and complete lockdown. Workers in other garment-producing Asian countries — namely Pakistan, Bangladesh, Sri Lanka, Indonesia, and Cambodia — were similarly affected.

Armed with clear evidence, AFWA launched a new strategy. Protests and appeals were no longer enough to hold brands accountable for these wage and human rights violations. They decided to take the brands to court.

We realize that self-regulation is never going to work because the very structure of global supply chains is oriented towards exploitation.

While global brands based in the United States and Europe have positioned themselves simply as buyers in the garment markets in Asian countries, AFWA points out that the brands in fact have explicit manufacturing contracts with factories in Asia mandating every detail of the work carried out by the workers there. So, therefore, when working on one of these contracts, the factory workers are working for the brand, not just the factory. This being the case, the brand has responsibility for the conditions in which they live and work.

“[Prior to now] this kind of legal paradigm has remained unarticulated in the global supply chain because of its transnational nature,” says Nivedita Jayaram, Bangalore-based Asia coordinator of labor rights at AFWA.

AFWA’s legal challenges are using the concept of joint-employer liability as a way to hold brands accountable under each production country’s national laws for what it calls “wage theft” during the pandemic. It isn’t enough, AFWA says, for existing laws to only apply to the suppliers or factories based there since they are unable to sufficiently account for violations or wage theft if the brands, based overseas, don’t. They argue that it was the direct actions of the brands that resulted in a humanitarian crisis for workers in the supply chains across Asia. Already working at stagnant, poverty-level wages, they did not have any kind of safety net or resilience when COVID-induced recession hit.

Some workers in India, for instance, recounted having no savings during the lockdown period for which they received no wages, surviving on rice and water. When they returned to work they faced increased verbal harassment and unpaid overtime. “Despite having worked as a tailor in the garment industry for 10 years I had only 3000 INR ($40 USD) as savings to meet the needs of a family of four for two months,” said Usha, 31, working at a H&M supply factory in Bengaluru, in the report. 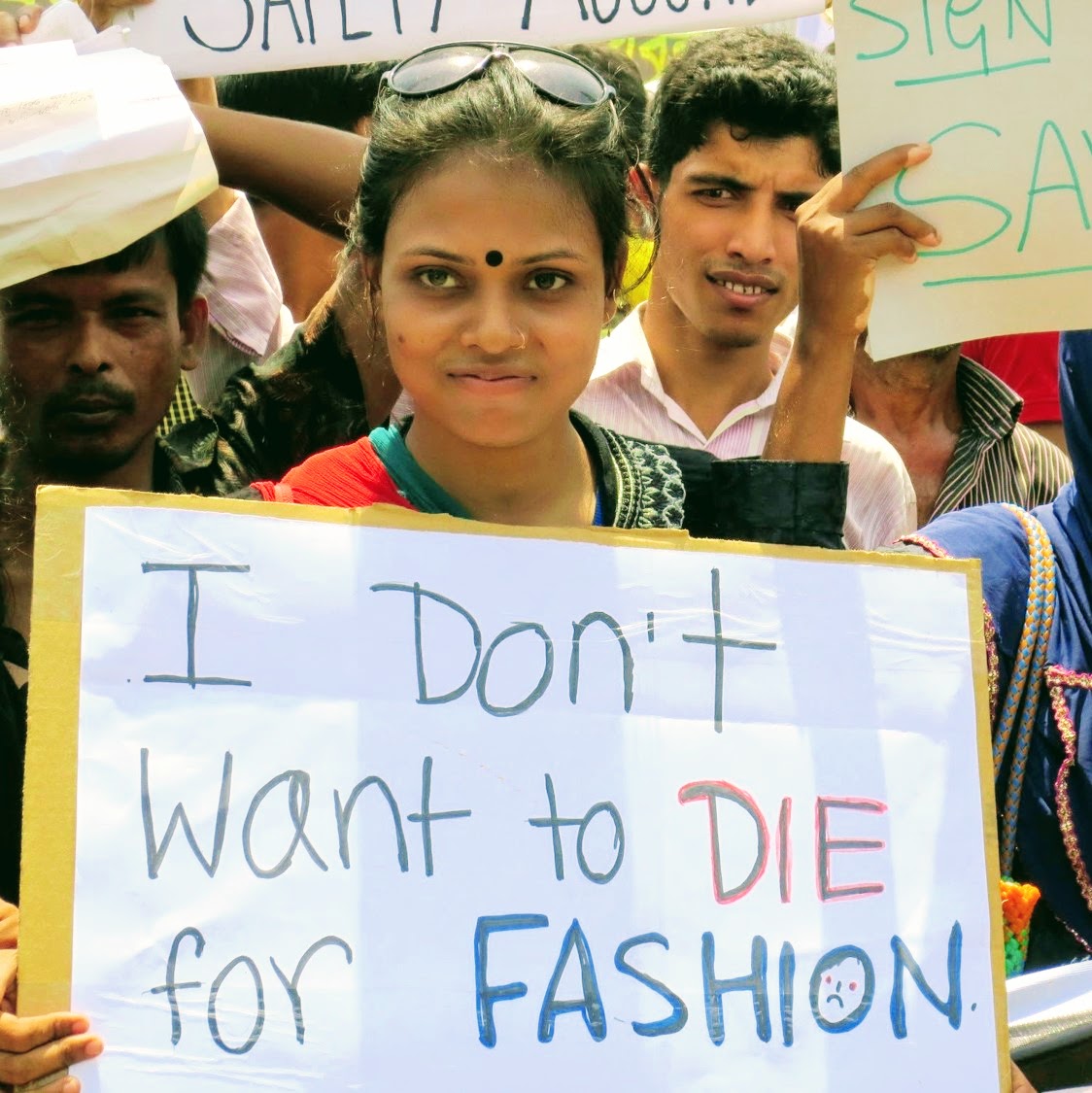 Jayaram says the fact that the industry is dominated by women workers also plays a factor in the way the supply chain operates. “Women’s wage is seen as a supplementary income which is one of the reasons why the minimum wage for the sector continues to remain low,” she says.

AFWA’s legal strategy is the latest tactic in a growing movement that is seeking to address this exploitation in more definitive ways. In the past, most campaigns have fallen short, says Ashim Roy, an Indian trade union leader and AFWA member. “We have been building on the idea that [brands] have the power, they have the right, and we are appealing to them as if they have to give us something,” he says. Now, through this legal route, he and others want to “enforce” existing laws to make the brands do the right thing.

“We realize that self-regulation is never going to work because the very structure of global supply chains is oriented towards exploitation, it’s oriented to make sure brands and businesses remain risk-free. Basically, they’re transferring risks to the suppliers in these production countries and down to their workers. That’s how their profits are being earned,” Jayaram adds.

“The idea [of these legal challenges] is to bring power back to production countries, back to governments to be able to legally regulate these labor relations, and back to suppliers and workers so that there is actual, inclusive industrial growth in these countries.”

If a brand can be made responsible… workers here don’t have to wait for a voluntary organization in Europe to do a campaign against the brand.

The demand for brands to be liable along with factories is also being made in western countries: garment workers’ unions in Leicester in the United Kingdom are pushing for a change in law, and it is a key part of California’s proposed Garment Worker Protection Act.

Since global brands do much of their manufacturing in Asia, which is among the biggest hubs of garment workers, it is even more urgent to hold them liable there. “Brands have very easily been able to say that the governments [in Asia] aren’t serious about labor protection, that there are no laws,” says Jayaram. “This is a way to say local laws do exist, except they are not being enforced” because brands have so far shrugged direct responsibility.

In Sri Lanka, following a legal complaint filed by unions, the labor commission has ordered an inquiry into the action of brands, including Levi Strauss & Co., that led to extreme hardship for over 1,400 garment workers employed in one factory.

Unions in India have filed four legal complaints with the labor commissioner in Bangalore, one of them against H&M, and in Indonesia, unions have filed a lawsuit in the civil court.

Riefqi Zulfikar, a lawyer working on behalf of the union in Indonesia, says it is a slow, challenging process given Indonesia’s recent labor reform and the fact that the country is in partial lockdown, which has made it difficult to effectively communicate with workers and draft these complaints. But, they are prepared for the long run. The goal is that these efforts set precedent.

If a brand can be made responsible for violation of labor law in India or any other Asian country, then that would mean that “workers here don’t have to wait for a voluntary organization in Europe to do a campaign against the brand,” Roy says. “Every worker here will have the agency, the right, the capacity to challenge them in their own country. And that is a huge leap of capacity for the workers.”

Rebecca Burgess’s Quest to Transform Cotton into a Regenerative Crop