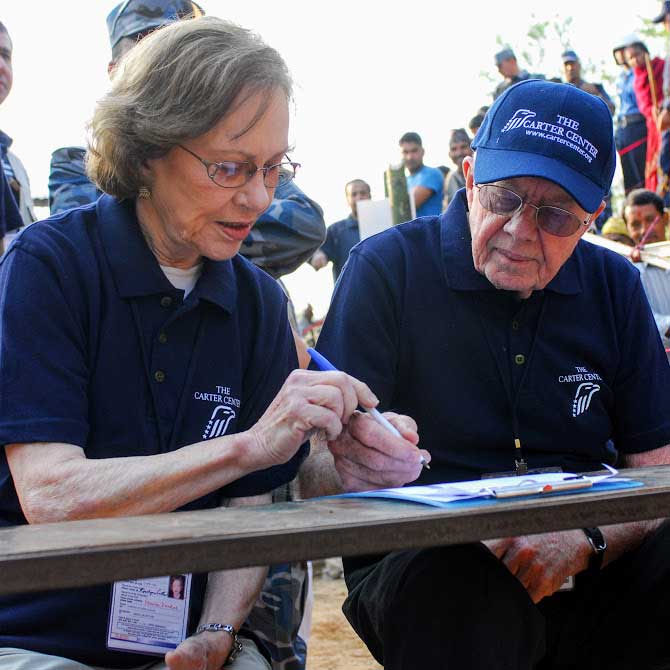 Since 1989, the Atlanta, Georgia-based Carter Center has played a quiet but critical role in laying the groundwork for enduring democracy across the world. A non-partisan organization founded by former US president Jimmy Carter, the center has played an umpire-like role in over 110 elections to date in 39 new or politically polarized nations, spanning the former Soviet Union, Latin America and Africa. As well as providing training for officials, the Center’s electoral observers help ensure free and fair elections by flagging possible malfeasance.

Normally on the sidelines of US elections for the reasons explained below, in 2020 the center decided to step in, albeit not with monitors but with training and tools for the sort of tasks carried out by officials in US states that the Center normally addresses elsewhere.

Driving Change caught up with David Carroll, the Center’s director of Democracy, as US election ballot-counting wound down. We asked about election integrity, digital threats to democracy, and what drew him to this important work.

Driving Change (DC): Originally the Carter Center, which plays a nonpartisan role in monitoring elections around the world, decided to sit this US election out.  Then you changed your mind.  Why, and what have you learnt so far about the integrity of our electoral system?

David Carroll: The Carter Center’s longstanding focus is international. Even if we wanted to engage in U.S. elections, doing so is more complicated than in other countries for a number of reasons. First, the U.S. doesn’t have a central election administration, but, rather, a decentralized patchwork of about 10,000 jurisdictions across 50 states. Also, our election observation work requires an official invitation and a welcome by major political parties, which is difficult in the U.S. because of the many jurisdictions and because, while we are nonpartisan, our founder was the leader of the Democratic Party, and some will always view us in that light.

But the main reason is that in our 30-plus years of observation, we’ve focused on countries where democracy seemed poised either to take a step forward or backward. These countries are often characterized by political polarization, ethnic or racial divisions, or fears that election results won’t be accepted or be seen as credible. Until the last five or 10 years – though the U.S. was far from perfect – it didn’t fit that category.

Unfortunately, those descriptions now fit the United States. We decided to launch a public information campaign to try to increase Americans’ knowledge of electoral process because we know from our international experience that increasing knowledge also increases public confidence. We also have done some work with election officials to encourage them to make their processes as transparent as possible.

DC: Panning out from current US election efforts, can you tell me, broadly, why election observers or monitors matter?  What does their presence mean from a peace and justice perspective?

David Carroll: The core purposes of election observation are to independently assess the quality of the electoral process and to publicly report on and recommend how to improve future elections. Observation missions commend electoral processes that are functioning well and criticize those that are not. Their commentary can bolster the legitimacy of successful electoral processes and increase public confidence in them. The presence of observer missions can ease citizens’ fears of election-related intimidation and violence.

Fielding an observation mission also sends an important message to host countries that the international community cares what happens there.

No election is perfect. One of the most important things election observers do happens months after the election – when they release detailed analyses and recommendations designed to help improve future elections, which, hopefully, can provide a road map for electoral reform.

DC: Can you give me a quick history of observers’ use, globally?  When were they first used and why, and what outcomes might we attribute to their presence then?  In what milestone elections have they materially made a difference?

David Carroll: After World War II, the United Nations observed a number of elections in newly independent colonies.  The organization of American States (OAS) also conducted small missions starting in the 1960s. Nongovernmental organizations began monitoring elections in the mid-to late 1980s, as the Cold War was winding down, and the Center was one of the pioneers. With the world less divided by Cold War rivalries, the U.S. and other countries began to place a more genuine emphasis on supporting democracy and democratic elections.

The Carter Center’s first observed election was in Panama in 1989. We denounced the election as fraudulent, and in the end, the alleged winners – Manuel Noriega’s hand-picked candidates – never took office. One of the Center’s other early election observation missions was in Nicaragua in 1990, when reports from the Center’s independent observation mission helped convince President Daniel Ortega that he had lost and should accept that Violeta Chamorro won the election.

Since 1980, the Center has observed more than 110 elections in 39 countries all around the world, and our work continues. In Guyana earlier this year, we and other observer organizations brought attention to the ruling party’s attempt to put forward results that weren’t credible. The international community used its voice to encourage a recount – and after months of legal battles and recounting, the opposition party came to power.

DC: Have any been called to witness in national court cases about the validity of results, in favor or against the official narrative? Which ones?

David Carroll: Observers have been invited occasionally to provide testimony in court cases. As a general rule, however, we stand behind our public reports, which contain all of our key information and findings.

DC: I have a similar question about the US. What is our history with electoral monitors/observers and what have been our milestone moments and their outcomes?

David Carroll: In the United States, rules about what kind of observation is allowed varies from state to state. But all states allow partisan poll watchers. The role of party poll watchers is different from that of nonpartisan observers. Party observers have a stake in the process and are there to keep an eye on things to make sure nothing improper happens that disadvantages their chosen candidate or ballot issue. They play an important role and help increase confidence in the process.

Nonpartisan citizen observation is not as widespread in the U.S. as it is in other parts of the world. While there are many local groups active across the U.S., unfortunately, there are not any organizations that conduct systematic large-scale nonpartisan election observation in the U.S.  From our international experience, we know that such efforts can play an important role, and so we hope that there will be greater such efforts in the U.S. in the future.

DC: Why is it important that outsiders be involved, and how have we addressed this issue in the US? Have non-American observers ever played a role?

David Carroll: In addition to benefitting from having more robust citizen observation efforts, the U.S. also can benefit from the work of outside observers in much the same way as any other nation. As in all countries, elections in the U.S. are far from perfect. Two international organizations – the Organization for Security Cooperation in Europe (OSCE) and the OAS – sent small observation missions to the 2020 election. Both have observed past U.S. elections as well and have issued reports that include recommendations that the U.S. should strongly consider adopting.

DC: From a personal perspective, what drove you to this work?

David Carroll: It was somewhat of an accident that I ended up at The Carter Center, in that I was completing a Ph.D. in international relations at the University of South Carolina and had planned to become a professor. As I was starting to apply for teaching positions, I noticed a job opening at a place called The Carter Center, with which I was only vaguely familiar. Needless to say, I got the job and found the work interesting and immensely gratifying. And, so, I’m still here.

DC: What do you enjoy most about what you do – and what do you find most challenging?

David Carroll: By far the two best things about The Carter Center are the ability to be associated with President Carter and his mission, and the opportunity to engage on a daily basis with some of the most important issues related to democracy and human rights. For me, being at the Center brings with it a deep responsibility to maintain the reputation that The Carter Center has earned. Most challenging is  continuing to evolve and adapt our work and methods so that we can keep up with the rapidly changing world and remain a leader in the field as we confront difficult new issues that arise.

DC: How do you see this work evolving in the future, given technical advances and political developments?

David Carroll: Social media is playing an ever-larger role in elections, and it makes it incredibly easy to spread misinformation and disinformation – or to harass candidates and elected officials. These challenges will only become greater in the foreseeable future, as the information ecosystem around elections becomes increasingly important to election integrity. Because of this, we’ve created a Digital Threats to Democracy Initiative, which is developing approaches and technological tools to monitor disinformation, hate speech, harassment, and dark advertising online.  We are including these tools and methods as a standard part of our observation missions. We’ve recently conducted digital threats monitoring activities in South Africa, Tunisia, Ethiopia, Myanmar, Bolivia, Guyana, Liberia, and Cote d’Ivoire.

In parallel to these challenges related to disinformation and other issues, the world is experiencing a rising tide of anti-democratic movements, with authoritarian and populist leaders in many countries undermining democratic institutions and closing political space and restricting human rights.  The work of democracy promotion is therefore more important now that it has been in my entire career.

DC: What advice do you have for anyone considering working as an election monitor, and what skills and personal qualities would equip them to thrive in this role?

David Carroll: Election observation is rarely a fulltime job – even in my case, it’s only part of what I do. But I encourage people interested in a job like mine to study politics, law, or international relations –and to learn at least one other language.

A good place to start for someone who wants to get into this field is to try find some opportunities to work in the field internationally to gain experience.

People who do long-term observation, which can involve being in a country for six months or more, need to be prepared for difficult assignments and sometimes rough conditions.

In terms of personal qualities, it helps to be curious, a good team player/colleague, and a good listener who can interact with concern and empathy.  And, of course, you should have a passion for democracy.