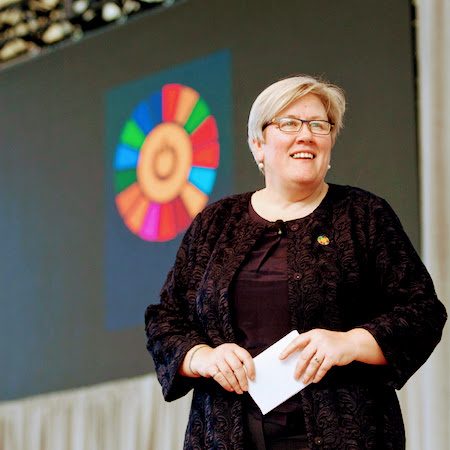 Our financial system is unfit for both our current situation and future, argues Rachel Kyte, Dean of the Fletcher School of Law and Diplomacy at Tufts University. “The challenge that we have for the next 20 to 30 years is twofold,” she says. “Firstly we have rising inequality…and then the second big challenge is that we have to decarbonise our economy.” Both are now layered on top of the extra economic difficulties created by the COVID-19 pandemic.

These needs are not yet reflected in the way that international finance operates, Kyte observes. The current flow of finance, for instance, to help developing countries cope with climate change is only marginally larger than before the 2015 Paris Agreement. But they could be, with an overhaul of the global financial system that she describes as a “new Bretton Woods”. With climate change now high on the global agenda again, and America rediscovering its international leadership role, 2021 could be a breakthrough year for this idea, which Kyte has been championing for the past couple of years.

A leading exemplar of the 21st Century global public servant, she is well placed to talk about the problems the modern world faces, as well as their possible solutions. Prior to joining the Fletcher School, Kyte was the chief executive of Sustainable Energy for All – a partnership between governments, the private sector and civil society, dedicated to increasing access to renewable energy – and a special representative of the UN secretary-general. Before that, she served as vice-president to the World Bank Group and a special envoy for climate change.

The original Bretton Woods was the United Nations Monetary and Financial Conference of July 1944, nicknamed after the New Hampshire location where it was held. Over three weeks, 740 delegates from all 44 Allied Nations hashed out a new financial order to meet the needs of a world emerging from its second ruinous war in 30 years. They needed a financial system which promoted stability, efficient foreign exchange, and global economic growth (and which, they sorely hoped, would prevent another Great Depression or World War). As well as tying all currencies to the US Dollar, they also decided to create two important institutions: the International Monetary Fund (IMF), which could lend money to countries in difficulty; and the World Bank, intended to help developing countries grow.

To Kyte, one of the most powerful things about the original Bretton Woods was its implicit emphasis on the point, and potential, of the global financial system: “to help society achieve its objectives”. There was a sense of solidarity, of allied countries united over basic shared principles and a common goal. In the decades after the Bretton Woods system collapsed, the international financial system has become “very detached”, both from the rest of the economy and from societal goals. A new Bretton Woods conversation could help bridge that divide, and would potentially lead to the adoption of solutions such as climate-for-debt swaps (a financial instrument where, instead of paying external loans, the indebted country pays for fast climate mitigation and adaptation projects).

The other crucial element of the original Bretton Woods was that it got all the major players around the table. This was easier then – though 44 countries attended, the world in 1944 had not yet had the era of independence and decolonisation that characterised the latter half of the 20th century and was, in effect, run by very few countries. Kyte concedes that a similar meeting today would be much more complicated. “You need China at the table, India, private equity, the OECD Development Assistance Committee, traditional aid agencies, etc. It’s a very, very different table.” But the benefits would far outweigh the negatives. “I believe this is a [moment] for reset, not just for crimping around the edges”, she says. Perhaps this year’s COP 26 meeting on climate change, to be held in the UK, can play a catalytical role for some of these changes.

The Bretton Woods conference proved that if the global economic order was not fit for purpose, it could, and should, be changed. In the face of climate change, there is evidence of an appetite to do so again. In October 2019, a report emerged from the United Nations Conference on Trade and Development (UNCTAD) calling for a new conference, mirroring the original Bretton Woods, in order to finance a “Global Green New Deal”. “The way to deliver the public goods we need to achieve Sustainable Development Goals by 2030 is to create a healthy, democratic and inclusive public realm at the global as well as the national level. Much as it was for the architects of Bretton Woods…” wrote Mukhisa Kituyi, UNCTAD’s Secretary-General.

In the meantime, Kyte suggests joint initiatives of “scaffolding and scholarship”, to ensure that necessary work is still undertaken while institutions are improved. “Scaffolding” refers to things like a reupping of the Debt Service Suspension Initiative agreed by the World Bank in March, and a Special Drawing Rights issue to allow the IMF actually to assist the countries which seek its help for their COVID recovery. “Scholarship” means reexamining how institutions function, such as enhancing the voting share of developing countries to give them a greater say on the allocation of capital according to need.

Even if current officials dawdle, her vantage point at the Fletcher School gives Kyte confidence that there is an upcoming generation of policymakers and leaders ready and able to make the required changes. “The young people who come [here] to study want to understand the world and to make it better…Wherever they come from on the political spectrum and wherever they come from in the world [40% of the school’s students are international], they are all committed to being skilled in diplomacy with a small d in order to make the world a better place.” Such enthusiasm and purpose keeps Kyte looking forward too, and optimistic that humanity is capable of rising to the twin challenges of inequality and climate change.