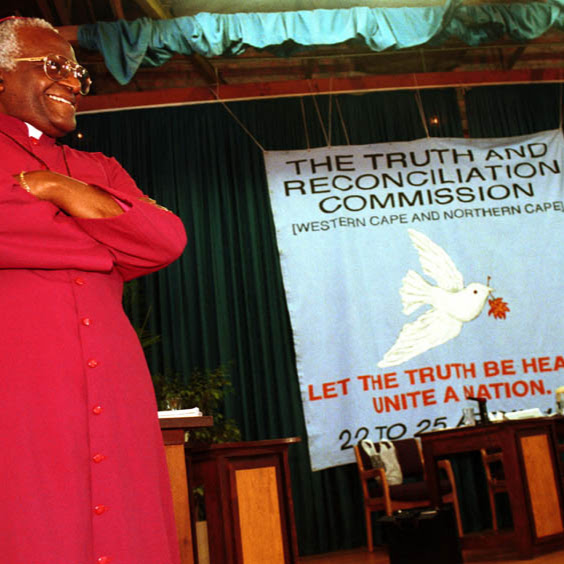 Post-apartheid South Africa established a national Truth and Reconciliation Commission in Cape Town under the Promotion of National Unity and Reconciliation Act No 34 of 1995. This was a radical alternative to the victor’s justice that is often meted out after extreme political transitions, which more often than not deepens the resentment of the losers, ensuring that the society remains deeply divided. South Africa’s pioneering approach sought simultaneously to establish truth and responsibility whilst also bringing about societal healing.

Chaired by Archbishop Desmond Tutu, hearings by the commission began in 1996, to carry out its mandate to bear witness to, record and in some cases grant amnesty to perpetrators of crimes relating to human rights violations. A register of reconciliation was created to allow citizens to express regret for past actions. The commission was replaced by the Institute for Justice and Reconciliation in 2000. Around 10% of the 7,000 people applying to the commission for an amnesty received one.

A similar initiative, the National Unity and Reconciliation Commission, was launched in Rwanda in 1999, five years after the country was devastated by civil war and genocide. The Government of National Unity Law No 03/99 created the commission, which became a permanent body in 2002 and still operates.

There had been truth commissions in several countries before South Africa’s, but none with the broad scope, legal force and centrality to the political transition. These earlier examples include Uganda (1974), Bolivia (1982), Argentina (1983) and Chile (1990). In 2008, Canada established a truth commission to investigate the past treatment of its indigenous peoples.

Now, truth and reconciliation efforts are increasingly a key part of peace agreements in countries recovering from political or violent internal conflict.