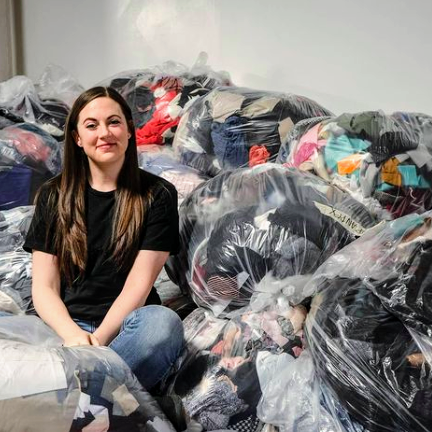 It’s a long walk from the drab entrance of New York’s Brooklyn Army Terminal (BAT) to the colorful offices of Fabscrap, a redistributor and recycler of pre-consumer fabric, which comes directly from designers rather than from stores or homes. But for founder Jessica Schreiber, the trip from New York City’s Sanitation Department to social entrepreneur was lightning fast. The nine months, she says, was “almost like having a kid.”

That was in 2016. Fast forward five years to today and the startup is growing gangbusters. It’s opening a Philadelphia site with backing from Nordstrom and Anthropologie’s parent company URBN to reroute some of its over 40,000 pounds in fabrics and samples so that pop-ups, ETSY makers, and students in Philadelphia and in nearby Washington, DC and Baltimore can buy deeply discounted fabric and notions. Next up: Los Angeles. Why such phenomenal success, so quickly?

Schreiber credits Fabscrap’s rapid rise to the fact that it is filling an unmet niche, one that landed in her lap – a “problem without a solution,” she says. Of course, her expertise in scale, logistics, and public education gleaned in government was a big help. During her five years at the NYC Sanitation Department, where she worked just after grad school, around 30 brands repeatedly asked where they might deposit rather than dump their raw material for reuse or recycling. These ranged from big bolts of unused fabric to buttons, zippers, and snaps, to mounds of index-card-sized samples from Como, Italy-based mills hawking their exquisite wool-based weaves. Problem was, Sanitation was set up to recycle cast-off apparel – not its uncut version. Result? Private trucks hauling tons of pristine, pricey fabric to unseen locations.

Schreiber answered the call by creating a new spoke in the fabric supply chain with its hub feeding an entirely new one to more local, smaller businesses. Despite high-profile successes repurposing haute couture dresses and crafting four-figure patchwork purses, the world had not yet cracked the code on rerouting excess fabric, cast-off clothing, and textile samples to DIY makers. Some ended up in landfills, despite pleas to repurpose them.

“Nothing like the collection, sorting, distribution, and thrifting model existed for pre-consumer fabrics,” Schreiber recalls.

“We are not creating another product. We won’t science or hack our way out of climate change by making new things, [but by] using something that already exists.”

She calls the designer portion of the supply chain “the tip of the iceberg” – many more tons, she says, fall on the factory floor. “Instead of turning off the tap, we’re soaking it up. There’s still a flood of material.” How did she attack the deluge?

In January 2016, Schreiber shared her idea. By March she’d landed a spot on Project Runway’s Fashion Startup, using up her vacation time to pitch on the show. That June, she quit her day job. By September she’d registered Fabscrap as a nonprofit. And somewhere in there she landed funding from a few investors. (Last year’s backers included Ashoka, Walmart, and Vogue). Then, in November, following the expiration of her nondisclosure clause and airing of her Project Runway episode, Fabscrap was publicly born – albeit modestly, in her NYC apartment.

There, she and some friends formed wine-and-TV-time sample-sorting and fabric-selling circles. Within months Schreiber was swimming through fabric and the textiles under and around her bed took over. So, she shifted to a storage space and then to a low-rent spot at Hanky Panky, a Jamaica, Queens warehouse with incubating space. That location didn’t last long either, as donations grew along with demand for her treasures.

Since 2018 Schreiber’s been in BAT and is now expanding into a second and bigger BAT space. Along with red hot growth has come a slew of accolades (not to mention features in Vogue, The New Yorker, and on NBC). And her work is helping the environment. From 2016 to 2020, Fabscrap has rerouted 655,710 pounds of fabric destined for landfills.

Absorbing this supply are up-and-coming designers such as handbag maker Crystalyn Kae and students from New York City’s Fashion Institute of Technology and Parsons School of Design, who sometimes purchase fabrics they cannot buy from retailers because they pass directly from mills to designers. Stretchy blends with even 1% of Spandex are shred to make insulation or filler for punching bags or pet beds for buyers who “pay what they wish”; eco-friendly designers such as Blue Jeans Go Green break down the 100% wool or cotton pieces into yarn (this process is called “fiber to fiber”) which later lands in garments. “We sort for where there is movement,” she says. And all along Schreiber and her team stay abreast of advances in material science, like those at DuPont, for example, that make possible reuse of donated fabrics, which she likens to “feedstock”.

Schreiber’s business model differs from that of her self-proclaimed sustainable fashion peers in several other ways. Fabscrap keeps costs low by tapping volunteers to sort smaller than kerchief-sized samples (nearly 40,000 pounds in 2020 sorted by over 6,000 volunteers to date). They, including this writer, are rewarded with five free pounds of fabric or of cast-off sample garments; design school students are both a ready labor and buying pool. Workshops on topics such as pattern making keep the community connected and productive. Last year, some 44,000 pounds of fabric was redistributed across 49 states (45% of this was sold online) with 76% of the usable fabric they received sold. About half that (22,000 pounds) was recycled.

And, in a world of fast fashion fueled by tweens’ and teens’ choices, the facility also helps build awareness about the impact of purchasing choices on the planet, by offering students field trips, both physical and virtual. They also collect micro-data that alerts up-and-comers to new supplies and arms mega-brands like J.Crew, Mark Jacobs, Macy’s, Esprit, and the GAP with information they can share with customers about how they have saved on C02 emissions and diverted pounds of fabric from landfills.

“We want to hold the industry accountable for its own waste,” Schreiber says. “But we don’t only want to point out a problem. We want to provide a solution; point to the next step. Consumers take responsibility. They should too.”

Having accomplished so much in very little time, what’s next for Fabscrap? Schreiber is pushing the industry to upgrade its technology and digitize samples, which is 75% of Fabscrap’s supply. She’s also pursuing tighter ties with material scientists. “The world is running out of water [a key input for fabric production]. We can’t ‘grow’ that. Material science is a key player in the future of fashion.”

Global expansion is also on her radar. With the structure and ties between designers, mills, nonprofits, and government varying widely from country to country, she envisions a franchise approach as Fabscrap expands. Franchises would copy the business model, data collection, awareness-raising, and links to scientific research aspects of the original in the fashion capitals of London, Milan, Mexico City, Sydney, Toronto, and Paris (watch out Emily!) – and beyond. “It’s not rocket science,” Schreiber says. “We care about data and who is responsible. We want to build accountability into the industry.” Fabscrap’s moonshot shows that one young visionary in government can turn the tide on a flood of waste with knowledge, connections, drive – and a dream.